An Egyptian court is examining a lawsuit that will ease the state's confiscation of Muslim Brotherhood-owned real estate in Sinai. 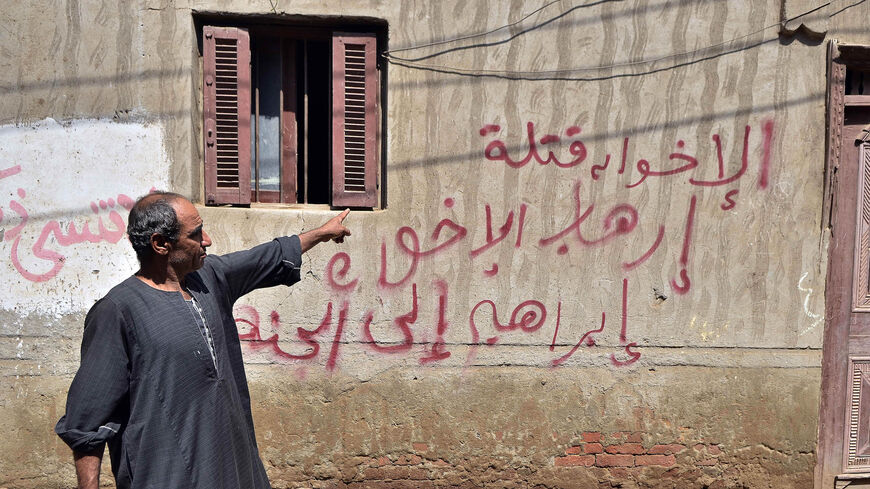 A relative of police officer Ibrahem Nasr, who was killed in an attack on two buses packed with Egyptian policemen near the border town of Rafah, in northern Sinai the previous day, points to graffiti on the wall of his home that reads in Arabic: " The Muslim Brotherhood are killers, terrorism of the Muslim Brotherhood," in Kafr el-Sawalmiya village in the Egyptian Delta region of Menufiya, Aug. 20, 2013. - MOHAMED EL-SHAHED/AFP via Getty Images

Egypt is inventorying Muslim Brotherhood assets in Sinai as the judiciary considers a lawsuit for the confiscation of real estate including houses, land and farms owned by Brotherhood leaders.

The government of Hisham Qandil, the prime minister who served under ousted Brotherhood-affiliated President Mohammed Morsi, had allowed these leaders to buy public and privately owned real estate in Sinai in the name of agricultural development.

The lawsuit revealed that the committee tasked with seizing and managing Muslim Brotherhood funds had found documents confirming the Brotherhood’s ownership of large lands and farms in Sinai. It accused Brotherhood leaders of using those farms and lands in terrorist operations against state institutions.

Al-Arabiya News Channel reported April 11 that Deputy General Guide Khairat Al-Shater had visited during Morsi’s rule the city of Al-Arish in North Sinai in 2012 and inspected land there.

Afterward, Qandil privatized public lands that Al-Shater allocated to high-ranking Brotherhood leaders. Critics say the funds generated from those properties were used to support the group and its terrorist operations in Sinai.

It also noted that the Brotherhood purchased land in Sinai for the Hamas movement.

In December 2012, under Morsi’ rule, then-Minister of Defense Lt. Gen. Abdel Fattah Al-Sisi prohibited the acquisition, usufruct or lease of land and real estate in strategic areas of military importance, and banned the possession of land in the Sinai Peninsula by non-Egyptians.

In January 2013, Sisi met with the tribal sheikhs of Sinai to reassure the Sinai tribes that the decision would not affect their interests. Sisi urged the sheikhs to assist and support the Egyptian armed forces.

Lawyer Samir Sabry, who filed the lawsuit told Al-Monitor Qandil had transferred Sinai land to a group of Palestinians and a number of Brotherhood leaders before the ban.

Sabry added, “A number of leaders and Palestinians who acquired Egyptian nationalities during the Muslim Brotherhood era acquired a number of lands in Sinai, which posed a threat to Egyptian security.”

He said, “The Muslim Brotherhood was planning to acquire large areas of land in Sinai. Around 11,000 large plots of land in Sinai were transferred to a number of Palestinians and leaders of extremist groups.”

Sabry explained that the lawsuit is intended to support the state in recovering the lands and ending the Brotherhood’s ownership of land in Sinai.

Sheikh Abdullah Jahama, leader of the Tarabin Bedouin and head of the Sinai Mujahedeen Society, told Al-Monitor, “During the Brotherhood’s rule there was a crisis in Sinai, as a large number of people close to the Brotherhood’s leaders and Islamic groups bought large areas of land, especially in Rafah and Sheikh Zuwaid in north Sinai, close to the border with the Gaza Strip.”

He continued, “Some Brotherhood leaders had set up tents in areas near the Egyptian border with Gaza to settle Palestinians during the Brotherhood’s era. The sheikhs of the North Sinai tribes objected and we did not allow this to continue. We feared that these Palestinians would be affiliated with the Hamas movement.”

Jahama explained, “The suspicious movements of the Muslim Brotherhood in Sinai prompted the Egyptian army to prohibit the ownership of land in Sinai to non-Egyptians. Even any land ownership by Egyptians must now be approved by the security authorities.”

He went on, “Currently, the National Authority for the Development of the Sinai Peninsula, affiliated with the armed forces is responsible for approving the ownership of land by Egyptians in Sinai. It investigates the affiliations and purposes of those wishing to own land. The state will not tolerate any security risks in Sinai as it aims to eradicate terrorist and extremist groups.”

Sameh Eid, a researcher of Islamic movements, noted that the Brotherhood reached out to the Salafi jihadist groups in Sinai during Morsi’s rule. He told Al-Monitor the lawsuit shows that there are popular demands for the state to confiscate lands owned by the Brotherhood’s leaders in Sinai.

“The political Islam current, in particular the Muslim Brotherhood, was aware of the importance of controlling Sinai due to its political importance and strategic location,” he said.

Eid concluded, “In the era of the Brotherhood, the group sought to communicate with all Islamic groups in order to gain more control. Therefore, the movements of these radical groups cannot be separated from those of the Brotherhood.”