Sudan joins forces with Egypt to crack down on Muslim Brotherhood 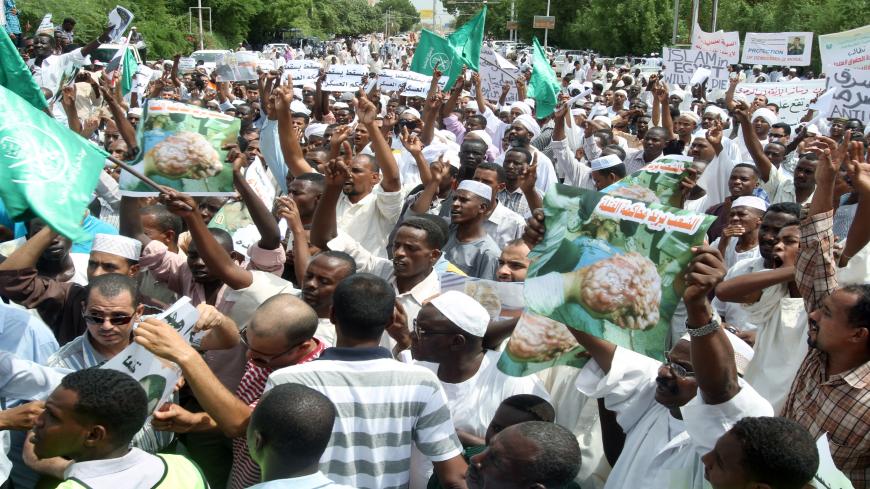 Egypt is seeking to join efforts with Sudan to confront the Muslim Brotherhood and extremist groups and ideas through several security and religious steps. In this context, the joint training course for imams of Egypt and Sudan kicked off in Cairo on Dec. 20 to confront extremist ideas.

Sudanese Minister of Religious Affairs and Endowments Nasr al-Din Mufreh stressed Dec. 21 during his speech at the opening of the joint training course at Cairo’s International Awqaf Academy for the training of imams and preachers that “the goal of the program is to train Sudan’s imams to promote peace, prevent war, fight extremism and work toward strengthening the principle of citizenship.”

In a Dec. 24 interview with Egyptian newspaper Akhbar Al-Youm, Mufreh said, “The reason the training is held in Cairo is that there are many historical and geographical commons between Egypt and Sudan, and what affects Sudan affects Egypt, especially as far as the religious discourse is concerned.”

He added, “The Sudanese government has pursued a policy of openness to the outside world, but the practices of the Sudanese Islamic movement affiliated with the Muslim Brotherhood has led to the isolation of Sudan and its government from many countries as Sudan was added on the list of countries sponsoring terrorism.”

Egyptian Minister of Endowments Mohamed Mokhtar Gomaa said during his speech at the opening of the training course, “The training consists of promoting the tolerance of Islam, as some religious groups have gone so far as to promote extremism. They promoted a discourse whereby extremism falls within the category of religiosity and that the more extreme the sheikhs are, the more religious they will be.”

“The relationship between Egypt and Sudan is characterized by cohesion and harmony, and the time is ripe for a recovery of the strong Egyptian and Sudanese relations,” he continued.

On Dec. 26, Gomaa announced that he agreed with his Sudanese counterpart to launch a joint missionary convoy between Egyptian imams and preachers in Sudan on Feb. 1- 10.

Sudan’s efforts to confront the Muslim Brotherhood are not limited to the religious side alone, as they have also touched on the security level. The Sudanese Ministry of Interior announced Dec. 9 the withdrawal of Sudanese nationality from 3,000 foreigners who obtained it during the rule of ousted Sudanese President Omar al-Bashir, including members of the Brotherhood who fled Egypt and other countries.

Egyptian newspapers broke the news of the Sudanese Ministry of Interior’s decision amid much fanfare.

On Dec. 18, the Emirati Al-Ittihad newspaper reported, “Those whose Sudanese citizenship has been revoked include leading figures from the Muslim Brotherhood in Egypt, Tunisian leader of Ennahda Movement Rashid al-Ghannouchi and members of the Palestinian Hamas movement, among other Muslim Brotherhood figures from other Arab countries.”

Al-Jazeera Net, affiliated with the Qatari Al Jazeera channel that supports the Muslim Brotherhood, published a report on Sudan’s decision to revoke the nationality of 3,000 foreigners under the title, “Sudan withdraws nationality of thousands of naturalized persons … Will it hand over Sisi opponents?”

The report said the decision is the result of “strong relations between the Sudanese Sovereignty Council and Egypt, and it comes in accordance with the Egyptian authorities’ request to hand over some of the opponents who fled to Sudan after 2013.”

On Oct. 27, Egyptian President Abdel Fattah al-Sisi met with the chairman of the Sudanese Sovereignty Council, Lt. Gen. Abdel Fattah al-Burhan, during his visit to Cairo.

Also in October, Al-Arabiya news channel revealed Egyptian-Sudanese coordination regarding the handover of Brotherhood members to Cairo, and said that “the meetings of Burhan in Egypt focused on coordination with the Egyptian leadership regarding the fight against terrorism.”

It added that “Sisi and Burhan discussed handing over wanted Brotherhood members in Sudan to Egypt during the coming period.”

Al-Taqi Ahmed Al-Mirghani, a Sudanese journalist and editor-in-chief of El Baath El Sudani newspaper, told Al-Monitor, “Since the ouster of Bashir’s government — which is affiliated with the Brotherhood — Sudan has seriously begun to confront the Brotherhood and their spread and control over the state by forming a committee to remove them from state institutions.”

The Sudanese authorities approved in November 2019 a law aimed at dismantling Bashir’s regime. This law provided for dissolving and confiscating the properties of the National Congress Party, the political arm of the Muslim Brotherhood’s organization.

Also, the Empowerment Removal Committee was formed in a bid to confront Muslim Brotherhood members spread across the Sudanese state institutions. The committee decided Dec. 10 to terminate the service of 239 advisers and ambassadors affiliated with the Brotherhood.

Mirghani noted, “Egypt is supporting Sudan to confront the Brotherhood attempts to destroy the state, especially considering that the Egyptian and Sudanese people have both managed to overthrow the Muslim Brotherhood rule.”

He added, “Sudan has resorted to Egypt for the purpose of training Sudanese imams to deal with the remains of extremist ideas spread by Brotherhood members, and the Sudanese people respect the Egyptian imams because Cairo hosts Al-Azhar, the beacon of Islam.”

Mirghani said, “The Egyptian-Sudanese agreement to confront the Brotherhood included pursuing and handing over all Egyptian Brotherhood members who fled to Sudan in the wake of the fall of President Mohammed Morsi by revoking their nationality and then handing them over to Cairo.”

He stressed that “the coming period will witness the highest levels of coordination between Egypt and Sudan, especially in light of the good relations between the two countries. Sudanese security personnel will [also] be trained in Cairo to confront the Brotherhood’s chaotic scheme.”