Egyptian President Abdel Fattah al-Sisi, wary of protests in Khartoum, is backing Sudanese President Omar al-Bashir, but to what extent? 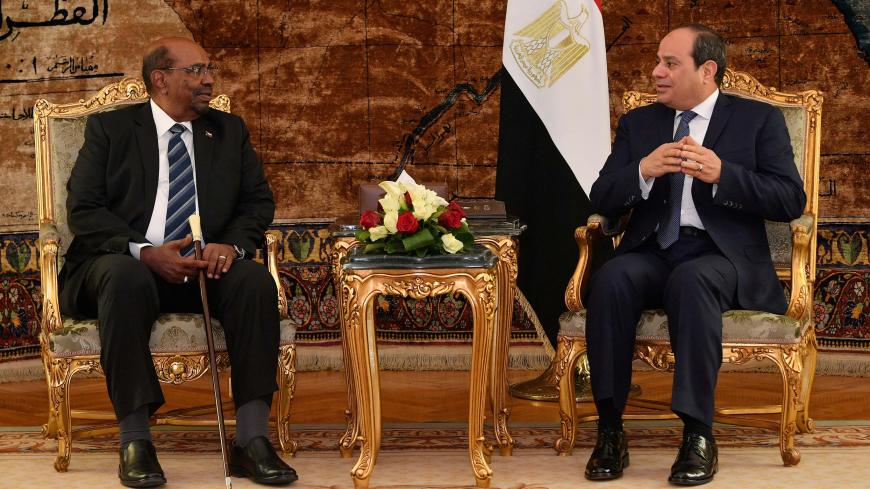 In a March 10 televised address to a military gathering, President Abdel Fattah al-Sisi warned Egyptians against the dangers of protesting. "Protesters elsewhere are ruining their countries," he said. Sisi did not mention the countries by name, but he was clearly unnerved by ongoing mass protests in Sudan and Algeria.

"All this talk [of protests] comes at a price that people are required to pay," he said. "How are tourism or factories or trade supposed to get off the ground? Should we eat or should we say that we are busy protesting?"

On March 11, longtime Algerian President Abdelaziz Bouteflika dropped his re-election bid after three weeks of widespread protests in Algeria. But the mass protests calling for regime change in Sudan continue relentlessly despite the heavy-handed response to the demonstrations by President Omar al-Bashir’s government. The protests in Sudan were triggered by high inflation following the devaluation of the Sudanese currency in October. The uprisings in the two Arab states have emboldened Egyptian activists who in recent days took to the streets calling on Sisi to step down despite a ban on demonstrations in Egypt. The small scattered protests that broke out in various parts of the country were sparked by anger over a recent train blaze in Cairo that left at least 25 people dead. Dozens of protesters were rounded up by security forces and detained.

Fearing a potential ripple effect if the uprising in Sudan succeeds in unseating the long-serving Bashir, Cairo has thrown its weight behind the embattled Sudanese leader.

"Egypt completely supports Sudan's security and stability, which is considered an integral part of Egyptian national security," presidential spokesman Bassam Rady said during a January visit to Cairo by Bashir's top aide Mohammed El Mirghani. A month earlier, Egyptian Foreign Minister Sameh Shokry and Intelligence Chief Abbas Kamel had paid a visit to Khartoum for "continued consultations between the two sides." The visit came just as the uprising in Sudan was entering its second week, signaling Egypt's growing concern over the spiraling unrest across its southern border.

Sudanese First Vice President and Defense Minister Lt. Gen. Awad Bin Awad and Sudanese Security and Intelligence Chief Salah Abdalla Gosh were in Cairo recently for talks with Sisi on strengthening bilateral ties and developments in Sudan. In a telephone interview, Abdel Mahmoud Abdel Halim, the Sudanese ambassador to Egypt, described the talks as a "cordial meeting between friends.” Rady, meanwhile, said after the meeting that Egyptian-Sudanese relations have been "reshaped since President Sisi assumed power in a way that fosters mutual respect." Egypt's pro-government media took the statement as a cue and immediately reverted to the old rhetoric of "one country and one people," in reference to the enhanced cooperation between the two countries — a far cry from the hostile media narrative that prevailed early last year when tense relations with Sudan had raised concerns about a potential war between the neighboring countries.

Sudan and Egypt remain at odds over a number of contentious issues, including control of the "Halayeb triangle" border territory — a 7,900-square-mile (20,000-square-kilometer) plot of land administered by Egypt since the mid-1990s and over which both countries claim sovereignty. Sudan's political support for Ethiopia in the latter's construction of the Grand Ethiopian Renaissance Dam is another bone of contention. Egypt perceives the dam as a threat to its national security as the country's share of water from the Blue Nile is expected to drop by 5 billion to 10 billion cubic meters per year (out of its total share of 55.5 billion cubic meters ) once the dam has been completed. Sudan, meanwhile, would be allowed to retain its full share of Nile water.

Sudan's warming ties with Turkey and Qatar have also ruffled the feathers of the Sisi government, which accuses the two latter countries of supporting the Muslim Brotherhood, outlawed by Egypt since late 2013. Egypt and its Gulf allies are wary of Turkey's growing influence in the region and have severed ties with Qatar on accusations that the Gulf state supports terrorism. Moreover, Sudan's Islamist-leaning government had given refuge to some members of the Muslim Brotherhood who fled Egypt in the wake of the 2013 coup that overthrew the Muslim Brotherhood President Mohammed Morsi. That policy is changing, however, as Khartoum has reportedly expelled the Brotherhood members in a bid to mend fences with Cairo, according to Al Arabiya. Egypt, meanwhile, had previously harbored members of the Sudanese opposition, but the two countries have vowed not to support opposition groups fighting their respective governments. Egypt has also been accused by the Sudanese president of supporting rebel groups in Sudan's western region of Darfur.

The unrest in Sudan, which has continued unabated for nearly three months, has been a game-changer for Egypt's troubled relations with its southern neighbor, even though the thaw in frosty Egyptian-Sudanese ties became evident several months before the mass protests broke out. During a visit in October by Sisi to Khartoum, Bashir announced the lifting of a 17-month-long ban on agricultural imports from Egypt, a move seen by Cairo as a goodwill gesture. In other developments that signaled a notable improvement in the strained relationship, the two countries agreed to connect their electricity networks, establish a rail link and strengthen trade relations between them.

The protests against Bashir have served to further cement ties between the two countries, with Sisi reiterating his backing for Sudan's unity and stability. During a visit by Bashir to Cairo in January, Sisi said he was "eager to maintain the close historical ties between the two countries." Cairo fears that a power vacuum in Sudan would potentially undermine Egypt's own security: the instability in Sudan may spill over the border, with an increased likelihood that armed extremists and weapons smuggling could pose serious security threats to the country in the same way that jihadi militias in eastern Libya have posed a direct threat to Egypt's national security since the overthrow of Moammar Gadhafi.

But analysts say that by highlighting support for Sudan's stability, Egypt was in fact, sending a message to Bashir that support for him could be withdrawn at any time. The "wavering" Egyptian stance is a means of piling pressure on Bashir to extract concessions on the Halayeb triangle and other disputed issues, they say.

El Haj El Warraq, editor-in-chief of the news site Hurriyat and a member of the Sudanese opposition, believes Egypt's backing for Bashir is "far from solid." In a telephone interview with Al-Monitor, he called on the Egyptian government to be neutral in the interest of Egypt's stability and the stability of the region. "Economic hardship, oppression and war have forced thousands of Sudanese to flee Sudan,” he lamented. "Egypt is paying the cost of the high rate of migration from Sudan."

He also said, "The current regime in Sudan is the source of instability because of mismanagement and corruption. There's an enormous amount of small arms in the hands of pro-government militias, popular security and popular defense. When there are arms outside formal security forces, that can only pave the way for anarchy. There can only be stability in Sudan if foundational reforms are carried out. The situation in Sudan is not sustainable."