Egypt, Sudan step up diplomatic action as Ethiopia reaches out to regional players

As Egypt and Sudan intensify diplomatic action on the regional and international levels to confront the unilateral Ethiopian policies on the Nile dam, Ethiopia is seeking a countercoalition with regional countries. 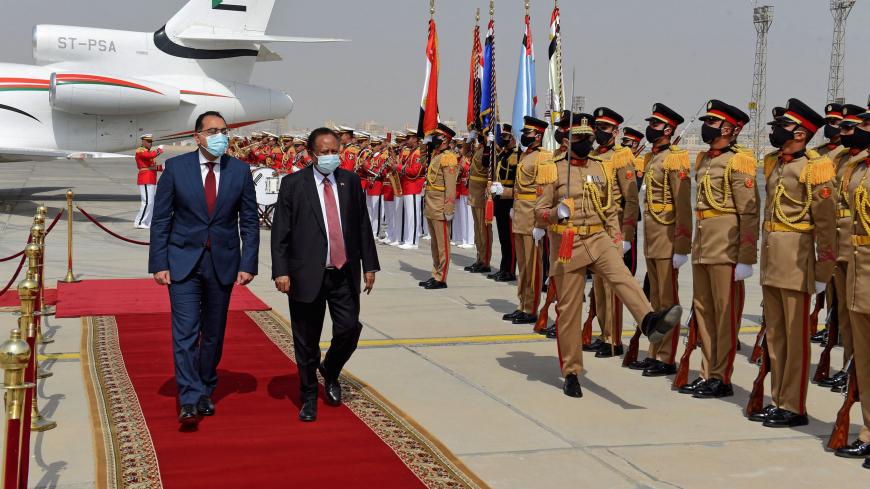 CAIRO — In a bid to confront unilateral Ethiopian policies on the Blue Nile, Cairo and Khartoum intensified their cooperation for joint action and cooperation on the diplomatic and information levels.

Meanwhile, Ethiopia is trying to place pressure on Sudan by supporting the Sudanese opposition and trying to forge a countercoalition with Eritrea, South Sudan and Somalia.

The Egyptian-Sudanese coordination has not been limited to official visits exchanged between the two countries, most notably President Abdel Fattah al-Sisi’s visit to Khartoum on March 7 and the March 13 visit to Cairo by Sudanese Prime Minister Abdullah Hamdok.

There now seems to be an unprecedented strategic partnership between the two countries amid cooperation at all levels aimed at confronting regional threats. Chief among these is the Grand Ethiopian Renaissance Dam (GERD).

Egypt and Sudan have recently launched an international diplomatic campaign to warn against the unilateral Ethiopian policies aimed at completing the filling of the dam’s reservoir without reaching a comprehensive agreement with the two downstream countries regarding the rules of filling and operating the dam.

A government source in the know on the Sudanese dossier told Al-Monitor on condition of anonymity, “Joint understandings have been concluded with the aim of addressing all kinds of threats facing the Egyptian and Sudanese national security, especially Ethiopia’s attempts to impose a fait accompli in the eastern Nile Basin, where a joint team has been formed to deal with the GERD dossier at all levels.”

He said, “There has been an agreement that each country plays its role and takes joint action at the regional and international levels to confront Ethiopia’s decision to complete the second filling phase of the GERD. They also denounced the ongoing Ethiopian encroachment [occupation and attacks] upon Sudanese territory since the outbreak of the border conflict in east Sudan.”

The source added, “There is an exchange of information between Cairo and Khartoum regarding threats that could affect national security amid ongoing talks about ways to deal with potential risks.”

The Egyptian-Sudanese convergence has not been limited to the formal side alone, as a series of community dialogues has taken place at the level of research centers, writers and media professionals to discuss thorny issues, such as the Halayeb and Shalateen Triangle, which were previously a source of tensions between the two countries.

At a meeting held with writers and thinkers from Al-Ahram Center for Political and Strategic Studies during his visit to Cairo March 13, Hamdok stressed “the need to start a dialogue that would tackle issues kept in the dark, all the while changing the rampant stereotypes and resolving outstanding issues between the two countries.”

On March 7, SUNA, the official Sudan News Agency, announced that the Ethiopian government provided logistical support, including weapons, ammunition and combat equipment, to rebel forces in the Blue Nile state of Sudan. Ethiopia was accused of trying to use rebels in Sudan to hinder the Sudanese army efforts on the eastern front, where a dispute over al-Fashqa region in the Sudanese state of al-Qadarif is taking place.

Observers of the African developments said that this is an attempt on Ethiopia’s part to forge alliances to counter the Egyptian-Sudanese alliance.

Meanwhile, Sherif Issa, assistant minister for African affairs, led a large Egyptian delegation from various ministries, companies and businessmen during his visit to Djibouti March 18 for talks on ways to diversify cooperation in economy, trade and investments, in addition to political consultations.

Asked about the Ethiopian moves against Sudan, Sabah Moussa, a journalist focusing on Sudanese and African affairs who writes for Al-You Al-Tali, a Sudanese daily, told Al-Monitor, “Addis Ababa rushed to use pressure cards against Khartoum and chose to support rebel forces despite the fact that these forces were a party to the peace agreement signed between the Sudanese government and rebel forces in Sudan on Oct. 3, 2020. But it is clear that these moves are an attempt to respond to the Egyptian-Sudanese harmony and show that it has a lot of pressure cards it can resort to — be it through the Sudanese armed opposition or a coalition with Eritrea.”

He said, “Sudan still has a card it can use against Ethiopia if it were to reciprocate. It can support the Ethiopian opposition, namely the Tigray People's Liberation Front, which escaped to Sudan after the Ethiopian federal military forces waged a war against them in the Tigray region [late last year]. However, despite Ethiopian provocations, the regime in Sudan is seemingly trying to practice self-restraint to protect both the country and the region from the consequences of a war that will be devastating.”

Ali Jaafar, a Sudanese researcher focusing on African affairs at the University of Khartoum, told Al-Monitor, “The Egyptian-Sudanese position is now stronger in the face of Ethiopia’s unilateral GERD policy, and this coordination is expected to be translated into urgent movements such as filing a formal complaint against Ethiopia before the UN Security Council after its policy threatened [stability] in the Horn of Africa.”

He noted, “I do not think that Cairo and Khartoum will take more severe positions and go so far as to take military action against Addis Ababa, especially considering that the two countries are keen to support stability policies in the Horn of Africa.”

Jaafar added, “The Ethiopian claims that the GERD is a symbol of African development that will liberate [the continent] of colonialism must be confronted. Egypt’s and Sudan’s ability to change the African positions on the GERD will put pressure on Ethiopia and force it to change its hard-line positions. The harmony between the Egyptian and Sudanese rhetoric has frightened Ethiopia. The more powerful this coordination is felt at the Arab, regional and international levels, the more Ethiopia will tend to change its positions.”

He said, “The international community now has several questions to answer concerning the possibility of a conflict erupting and having serious dimensions in a region overlooking significant waterways."

Cairo and Khartoum continue to condemn the hard-line Ethiopian stances and the insistence on the unilateral completion of the dam’s filling.

Commenting on the speech of the Ethiopian foreign and water ministers on the occasion of the 10th anniversary of the inauguration of the GERD, the spokesman of the Egyptian Ministry of Foreign Affairs, Ahmed Hafez, said in a statement March 18, “Ethiopia’s intention to impose a fait accompli on the downstream countries pose a threat to the interests of the Egyptian and Sudanese peoples and affect security and investment in the region.”

The Egyptian and Sudanese attempts to bring the Ethiopian policies to a halt depend on clear regional and international positions capable of protecting these two countries’ interests in the Nile waters, as these interests are guaranteed by several water treaties, including the Convention on the Law of Non-Navigational Uses of International Watercourses.