The Ethiopian foreign minister once again criticized Egypt’s and Sudan's attempt to prevent operation of the Nile megadam, sparking an angry reaction from Cairo. 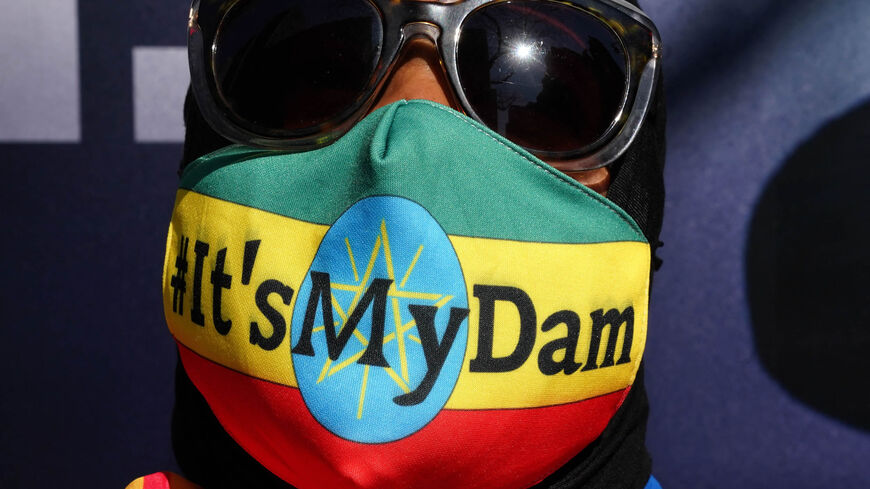 Protesters march down 42nd Street in New York during a "It's my Dam" protest, where Ethiopians unite around the Nile River mega-project, March 11, 2021. - Timothy A. Clary/AFP via Getty Images

CAIRO — Amid the stalled negotiations on Ethiopia’s controversial dam it is building on the Blue Nile, the main tributary of the Nile River, recent Ethiopian remarks have escalated the dispute with Egypt and Sudan.

In an interview with Al Arabiya TV channel Feb. 12, Ethiopian Foreign Minister Redwan Hussein called on Sudan and Egypt not to stick to their position on the Grand Ethiopian Renaissance Dam (GERD), noting, “The Ethiopians cannot wait forever. We expect the green light to use our resources.”

He said, “Egypt should encourage Ethiopia to finish building the GERD quickly because we must cooperate together in taking advantage of our resources, even during droughts.”

Hussein noted, “We have informed the Sudanese that we are ready to exchange data regularly to meet their concerns over the security of their smaller dams, but their position now serves the interests of a third party, not theirs.”

He continued, “Ethiopia provided more opportunities for Egypt and Sudan to benefit from the dam, despite their failure to appreciate it.”

He stressed that Ethiopia will use its resources without causing any harm to the downstream countries and that the dam is a project of cooperation and regional integration.

Mona Omar, former assistant to the foreign minister for African affairs, told Al-Monitor, “Hussein’s statements are an attempt to drive a wedge between Egypt and Sudan, and they are a continuation of the torrent of Ethiopian statements regarding the GERD, at a time when Egyptian officials are reluctant to make similar statements.”

She said, “Such statements aim to distract public opinion from what is happening inside Ethiopia. It is only natural for Egypt to demand the passage of water even in periods of drought, especially since the country is now below the water poverty line.”

Omar noted, “Coinciding with Senegal's assumption of the presidency of the African Union and the anticipation surrounding the role it is likely to play in sponsoring new negotiations on the GERD — in addition to talks about the possibility of Djibouti mediating to find a way out of the crisis — Ethiopia is trying to exert pressure by launching rumors about Egypt wanting to benefit on its own from the dam’s waters and not caring about the development that Ethiopia seeks to achieve.”

She added, “There is no solution except through negotiation, and common ground must be reached through a good mediator.” She said Senegal is a strong country with influence on the African continent, is respected by everyone and can play this role, so long as all parties show goodwill.

Despite the stalemate in the GERD negotiations since April 2021, Egypt has always stressed its keenness to reach a binding legal agreement on managing and operating the dam.

Ayman Abdel Wahab, deputy director of Al-Ahram Center for Political and Strategic Studies, told Al-Monitor, “Hussein’s statements included three inaccuracies. The first is viewing Sudan as a country that does not know its interest as if Ethiopia is a guardian that can determine its [Sudan’s] interests and threats, while the Ethiopian position was intransigent with regard to coordinating with Sudan and providing it with data on filling the dam.”

He said, “The second inaccuracy is related to the Ethiopian description of Egypt's view of the GERD as if the dam does not represent an explicit threat to Egypt’s water security and subsequently its national security. The evidence for this is the exaggeration in the amount of water stored in the GERD, which exceeds its capacity, and Ethiopia's need to generate electricity, which makes the security of the dam questionable in light of the technical issues it is facing.”

Egypt, which suffers from water scarcity, views the GERD as an existential threat that will reduce its water share of the Nile, and Sudan shares the same concerns, while Ethiopia considers it a source for achieving development through electricity generation.

Abdel Wahab noted, “The third inaccuracy is that Ethiopia did not negotiate seriously and did not wait for a binding agreement to be reached. All it did over the past 11 years is mere procrastination to gain time and impose a fait accompli, which is evidenced by its initiation of the first and second filling without coordinating with the other parties. Meanwhile, Egypt has shown significant flexibility.”

He explained, “Addis Ababa did not take the negotiations seriously. The GERD’s objective is not at all cooperative or developmental as it claims. Ethiopia is rather using it to maximize its interests at the expense of Egyptian water security, as it also seeks to impose a new fait accompli to be the one to decide when and how much water the downstream countries get.”

On July 19, 2021, Ethiopia announced the completion of the second filling of the dam’s reservoir without an agreement with Egypt and Sudan. On Sept. 9, 2021, the Ethiopian Minister of Water, Irrigation and Energy Seleshi Bekele announced that his country plans to generate electricity from the GERD turbines by the Ethiopian New Year, on Sept. 11.

Abdel Wahab pointed out, “The Ethiopian statements are trying to hold Egypt and Sudan responsible for obstructing the negotiations, to win over the public opinion, especially after the civil war [with the Tigray] that greatly damaged the image of Ethiopian Prime Minister Abiy Ahmed. The GERD is thus Ethiopia’s winning card on which Ahmed is betting to improve his image internally and externally by showing a kind of false flexibility.”

Meanwhile, Heba al-Bashbeshi, researcher at the Institute of African Studies at Cairo University, told Al-Monitor that Hussein’s statements provoked the people and the political leadership in Egypt. “Cairo has a right to the waters that Addis Ababa is holding at the GERD,” she said.

She noted, “Ethiopia did not give other parties any opportunities. It has refused to share any information about the dam, the way it was built or the safety factors within it, especially since many experts have warned about the GERD’s technical issues.”

Bashbeshi noted that Addis Ababa seeks to raise the GERD issue in the media in order to support the continuation of Ahmed’s regime, which she claims has lost its legitimacy.

She stressed the need for Egypt to maintain its position by adhering to a legal agreement and ignoring Ethiopian statements.