Egypt, Ethiopia and Sudan continue to trade accusations on the failure of the Nile dam talks, in what some say is an attempt to draw the attention of the new US administration into the regional file. 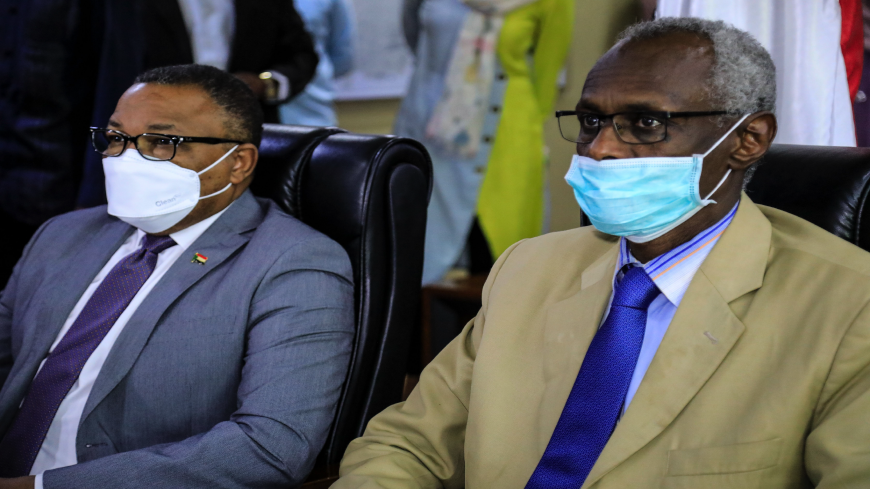 Sudan's Minister of Irrigation and Water Resources Yasser Abbas (R) and Minister for Foreign Affairs Omar Gamar al-Din are pictured during a video conference meeting with their Egyptian and Ethiopian counterparts, to discuss future steps in Grand Ethiopian Renaissance Dam (GERD) negotiations, in the capital, Khartoum, on Jan. 10, 2021. Sudan warned today that it cannot continue the "vicious cycle" of negotiations with Egypt and Ethiopia in the long-running dispute over Addis Ababa's controversial Blue Nile mega-dam. Last week, the three countries had agreed to hold further talks to agree on the filling and operation of the vast reservoir behind the 145-meter- (475-foot-) tall hydropower Grand Ethiopian Renaissance Dam (GERD). - ASHRAF SHAZLY/AFP via Getty Images

Egypt’s Foreign Minister Sameh Shoukry has recently accused Ethiopia of obstructing negotiations to reach a binding agreement on the giant hydroelectric dam being built by Addis Ababa on the Blue Nile.

In a speech to parliament on Jan. 26, Shoukry said Cairo engaged in US-brokered talks last year to strike a balanced agreement on the Grand Ethiopian Renaissance Dam (GERD) that preserves the interests of all concerned parties, i.e., Egypt, Sudan and Ethiopia.

The tripartite talks resulted in a US-mediated draft deal to resolve their dispute. Egypt initialed the agreement, but Ethiopia skipped the signing ceremony and accused then-US President Donald Trump of siding with Cairo. Sudan attended the meeting but did not sign.

“Ethiopia rejected the deal and boycotted the negotiations in Washington and started to unilaterally fill the dam without an agreement on the rules of the GERD filling and operation,” Shoukry said to parliament.

Ethiopia completed the first filling of the dam last year and vowed to start the second phase of filling the GERD reservoir in August of this year.

The chief diplomat said Cairo participated in all negotiations and meetings in the hope of reaching an agreement but was met with Ethiopian intransigence.

Egypt depends almost completely on the Nile River for its water supply and fears that the GERD will drastically reduce its water share. Ethiopia says the dam, which is being built near the border with Sudan on the Blue Nile, a main tributary of the Nile River, will not harm Egypt and Sudan, two downstream countries.

Cairo has embarked on a diplomatic offensive aimed at convincing Ethiopia to sign a binding agreement on the filling and operation of the giant dam, including bringing the issue to the UN Security Council’s attention. Addis Ababa has refused to bow to the pressure.

Several rounds of African Union (AU) -sponsored negotiations between the three countries have failed to yield any results amid frictions on thorny issues like drought mitigation and dispute resolution.

On Jan. 24, Egyptian Minister of Irrigation and Water Resources Mohamed Abdel Ati blamed Ethiopian obstinacy for the failure to reach an agreement on the GERD.

“Ethiopia has backed down on all agreed principles to resolve the dam dispute,” Abdel Ati told parliament. “Unfortunately, Ethiopia is showing intransigency regarding the Nile dam file.”

“Currently, we are trapped in a vicious cycle of negotiations,” Ibrahim told the Dubai-based Al-Arabiya television. “Sudan has no demands other than participating in the administration of the dam project and sharing information.”

Sudan stands to gain from the dam’s hydropower and flow regulation but worries that filling the giant dam without an agreement threatens the safety of its own dams.

Sudanese Minister of Irrigation and Water Resources Yasser Abbas said Jan. 24 the GERD poses a direct threat to the Roseires Dam, the largest in Sudan. “Since war is not an option, Sudan has started a diplomatic effort to urge the international community to shoulder its responsibility toward the Ethiopian threat to half of Sudan’s population on the Blue Nile,” he said.

Abbas continued, “Sudan will not allow the filling and operation of the GERD without a binding agreement that guarantees the safety of the country’s dams and lives of its population.”

Sudan and Ethiopia are engaged in a border conflict over the disputed al-Faqsha border region. Khartoum says the area around al-Fashqa was demarcated under colonial-era treaties dating back to 1902 and falls into the country’s border.

Sudan dispatched delegations to Kenya, South Africa and Saudi Arabia to explain its stance regarding the Nile dam dispute and current border conflict with Ethiopia.

“The prediction about the outbreak of war on the waters of the Nile is wrong,” Bekele said. “[The GERD] is a factor in strengthening and developing the Nile Basin countries.”

Amani al-Tawil, director of the African program at Al-Ahram Center for Political and Strategic Studies, opines that trading accusations between the three countries aims to draw US attention to the dam dispute.

“The Nile dam negotiations are now at a standstill, and accusations between the parties are primarily meant to draw the attention of the new US administration, as it is still shaping its policies on world affairs,” Tawil told Al-Monitor.

Tawil thinks that Egypt and Sudan will seek to escalate their diplomatic campaign to pile pressure on Ethiopia to soften its position on reaching a binding agreement on the rules of filling and operation of the GERD.

“Cairo and Khartoum are likely to launch a campaign to internationalize the Nile dam issue,” Tawil said. “Egypt is not excluding any option as Cairo will not allow Addis Ababa to complete the second filling of the dam reservoir without an agreement.”

Gamal Bayoumi, former assistant minister for foreign affairs, believes Ethiopia was refusing to reach an agreement on the dam project for political reasons.

“This Ethiopian intransigence is based on non-technical reasons, as Addis Ababa wants to show that it is politically more powerful than Egypt,” Bayoumi told Al-Monitor by phone. “Addis Ababa is seeking to push Cairo to agree on buying the Nile water, but this will not happen since the Nile River is an international river.”

The former diplomat advised the Egyptian authorities to follow a wait-and-see attitude in dealing with the Ethiopian dam file. “Cairo has to show patience and should not be dragged into a conflict with Ethiopia over the dam project,” he said.

Bayoumi continued that Ethiopia can’t store water behind the dam for good since Addis Ababa is primarily seeking to use the GERD for electricity generation.

“The dam issue needs patience and clever diplomacy from Cairo in order to continue embarrassing Ethiopia diplomatically until it bows to the Egyptian and Sudanese demands,” he said. “What Egypt needs to do now is to find other options to fulfill its needs of water in the first years of filling the dam reservoir.”