Egyptian President Abdel-Fattah al-Sisi said "no one will touch Egypt's water" as Ethiopia prepares for the third filling of the Grand Ethiopian Renaissance Dam. 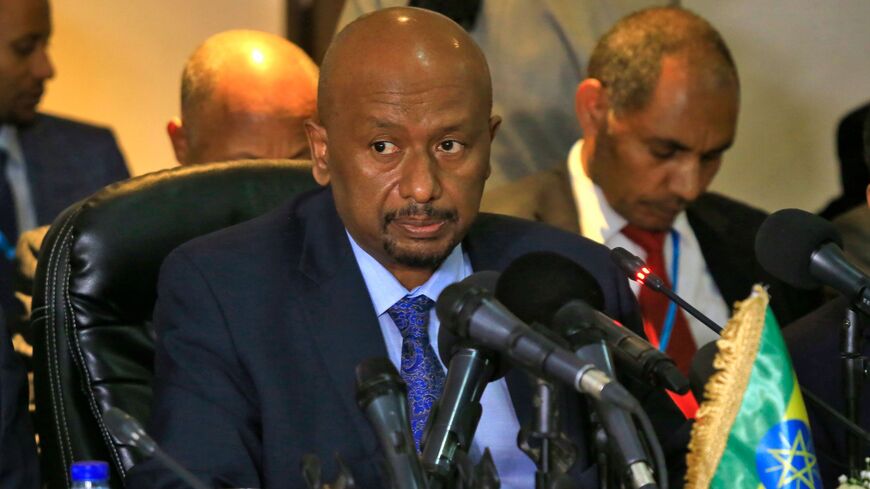 Ethiopian Minister of Water, Irrigation and Electricity Seleshi Bekele takes part in a trilateral meeting to resume negotiations on the Grand Ethiopian Renaissance Dam, in the Sudanese capital of Khartoum on Dec. 21, 2019. - ASHRAF SHAZLY/AFP via Getty Images

CAIRO — Ethiopia’s Ambassador to the United States Seleshi Bekele recently called for a return to the negotiating table regarding outstanding issues with the Grand Ethiopian Renaissance Dam (GERD) — an invitation that fell on deaf ears in Cairo and Khartoum at a time when Addis Ababa is preparing to complete the third filling of the dam’s reservoir during the flood season expected to start in early July.

During a June 10 meeting with US Special Envoy for the Horn of Africa Michael Hammer, Bekele — who also holds the position of the chief negotiator in the GERD talks — stressed his country’s interest in resuming the tripartite negotiations led by the African Union (AU).

Meanwhile, the Ethiopian Foreign Ministry confirmed in a June 10 statement Addis Ababa’s readiness for the third filling of the dam’s reservoir on schedule.

Egyptian President Abdel Fattah al-Sisi raised the tone as he spoke recently of Ethiopia’s move to fill the dam without prior agreement with Egypt.

Speaking to reporters in the Menoufia governorate on June 13, Sisi said, “I won’t say much except that [no] one will touch Egypt’s water,” adding that the Egyptian government has been carrying out unprecedented projects to make the most of available water.

An Egyptian diplomatic source who is well-informed on the GERD issue told Al-Monitor on condition of anonymity, “Egypt’s position on the negotiations with Ethiopia over the GERD has been clearly stated in several official meetings with diplomats. We said that Egypt believes in a peaceful diplomatic solution to resolving any technical or legal dispute regarding the dam or its future impact on Egyptian and Sudanese water security.”

“The negotiations have been stumbling due to the absence of good intentions [on the part of Ethiopia] to reach an agreement, which always disrupts the talks. The basic item of negotiation, which is to reach a comprehensive and legally binding agreement on the dam’s filling and operation, is still not recognized by Ethiopia, which is at the core of the problem,” the source said.

“I don’t think any negotiations will lead somewhere if Ethiopia continues to stick to this approach,” he added.

The source added, “We held several meetings in the past under the AU sponsorship in a bid to agree on the items that should be included in the negotiations in terms of technical and legal aspects. But no item has been agreed upon because of the Ethiopian intransigence.”

“Ethiopia continues to see many issues relating to the dam and affecting Egyptian and Sudanese interests in the Nile water as a form of national sovereignty, which is inconsistent with the rules of international law for transboundary rivers,” he added.

In a statement to Al-Arabiya channel on May 27, Kifle Horo, GERD project manager, said that Egypt and Sudan might be affected by the filling operation, which will nevertheless continue as it is an “automatic process,” as he put it.

This was the first time that the Ethiopian side acknowledged the potential damage the filling operations of the GERD could have on both Egypt and Sudan — as Ethiopia insisted in the past on the benefits of the dam.

Prior to the trial operation of the dam in February, Ethiopian Prime Minister Abiy Ahmed urged on Jan. 20 Egypt and Sudan to cooperate in building “peace and coexistence” considering that the GERD is the appropriate project to achieve this “higher purpose.”

The Egyptian diplomatic source said, “We have yet to receive any real initiative to sponsor or start talks with Ethiopia, whether by the AU or any international or regional mediators.”

Cairo has been seeking via diplomatic channels to invite and encourage the concerned international powers to take a decisive position in relation to the dispute with Ethiopia over the GERD and to constantly warn of the perils of slipping into a regional dispute over the Nile water, which may threaten international interests in the region as well.

In a meeting with European Commission President Ursula Gertrud von der Leyen during her visit to Cairo on June 15, Sisi touched on the GERD issue, stressing “Egypt’s keenness on reaching a binding, legal agreement that achieves the interests of all parties.”

Regarding the possibilities of a dialogue in order to reach a quick agreement before the third filling of the dam, Salah Halima, head of the Egyptian Council on African Affairs Salah Halima told Al-Monitor, “Ethiopia continues to be intransigent and evasive in a bid to carry out the third filling stage of the dam unilaterally, without any consideration to the Egyptian and Sudanese interests.”

“Addis Ababa’s call for resuming talks is a little too late and not serious in any case, as the Ethiopian authorities are still managing the Nile water through unilateral decisions and the imposition of a fait accompli,” he said.

Halima added, “Egypt has exhausted efforts to resolve the conflict by peaceful means and has the right to legitimate defense of its interests if it senses any aggression that might threaten its national water security.”

He stressed that “the terms of the comprehensive agreement on filing and operating the GERD have been clear since the 2020 meetings [held] in Washington, and there’s no need to go back to the negotiating table for this.”

The GERD talks came to a halt and faltered in April 2021 following the last meeting between Egypt, Sudan and Ethiopia that was held under AU auspices in Kinshasa, the capital of the Democratic Republic of Congo.

“Ethiopia rejected proposals put forward by Egypt and supported by Sudan to develop the negotiating process and enable countries and parties participating in the negotiations as observers to actively engage in the talks, participate in the conduct of negotiations, and propose solutions to controversial technical and legal issues,” the Egyptian Foreign Ministry said in a statement following the last round of talks on April 6, 2021.

Nermin Tawfik, a researcher on African affairs and the general coordinator at the Pharos Center for Consulting and Strategic Studies, told Al-Monitor, “Ethiopia’s previous behavior in managing the GERD issue shows that it is not serious about relaunching negotiations and is just playing for time.”

“The ongoing conflicts in Ethiopia, mainly the Tigray crisis, continue to affect the Ethiopian administration’s decision-making process, as the ruling regime has always relied on the GERD as a national project that could bring together the conflicting Ethiopian ethnic groups,” she added.

Tawfik believes that the international positions regarding the dispute over the GERD are limited to issuing diplomatic statements only.

“The US has not played a serious role in the negotiation file over the filling and operation of the dam so far. This has become clear since Ethiopia withdrew from the talks when [former US President Donald] Trump was still in office,” she said.

“Today, with President Joe Biden’s administration, it is true the US government seems to understand the paramount importance of this issue to the Egyptian people. Yet there has been no action on the ground except for some diplomatic statements,” Tawfik added.

Resuming negotiations over the contentious issues of filling and operating the dam remains unlikely unless Ethiopia shows good faith in implementing the terms of the Declaration of Principles Agreement that was signed between Egypt, Ethiopia and Sudan in March 2015 to turn the GERD dispute from a conflict issue to a project of cooperation and joint management of the water of the Blue Nile, in a bid to serve the interests of the three countries and reduce the potential severe damage from water retention and storage on the Ethiopian plateau.