The opening of the land port between Egypt and Sudan comes as part of a series of conciliatory steps between the two countries. 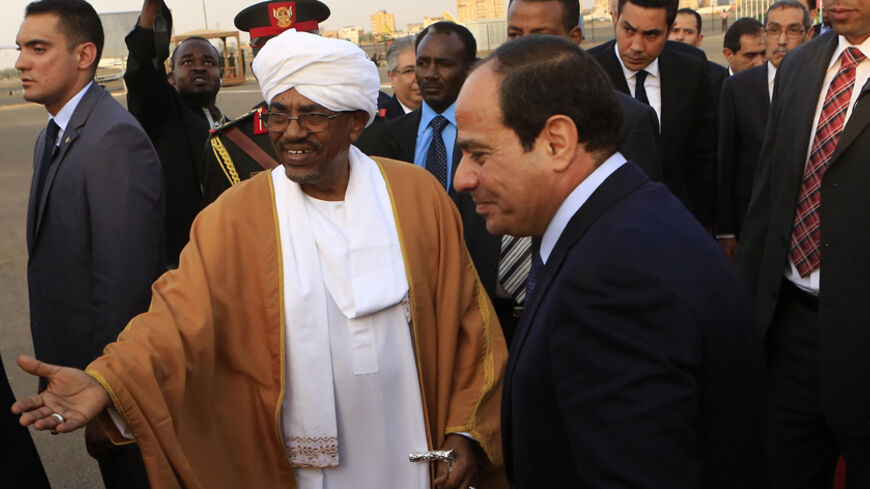 CAIRO — The opening of the land port between Egypt and Sudan on Aug. 27 triggered many questions about the extent of harmony and reconciliation between the two countries; things have been tense since the days of former Egyptian President Hosni Mubarak.

Cairo has been trying to win over the hearts of the Sudanese government and people since President Abdel Fattah al-Sisi took power. This is despite concerns that Omar al-Bashir’s Islamist regime in Sudan preferred the Muslim Brotherhood, which saw several of its members flee to Sudan after Mohammed Morsi’s ouster. However, national security matters pushed the Egyptian government to overcome this issue and try to reach rapprochement with Sudan once again.

The rapprochement initiatives of the Egyptian government with Sudan began to take shape after the surprise visit of Sisi to Khartoum on June 27. Moreover, the inauguration of the Eshkeet-Qustul land port was expedited to serve the rapprochement, despite having been delayed more than three years.

Sudanese Ambassador to Cairo Abdel Mahmoud Abdel Halim was upbeat about Egypt-Sudan relations in an interview with Al-Monitor. “The relations now are at their best and are kicking off significantly,” he said, describing the opening of the border crossing as a “historical step” aimed at increasing the social and cultural communication space first and foremost.

“The higher Egyptian-Sudanese committee will convene in Cairo soon and will be presided by the Egyptian prime minister and the first vice president of Sudan. This meeting will affirm that both sides are committed to coordinate, cooperate and complement each other in issues of shared interest and regional matters,” Abdel Halim added.

Hamdi Abdel Rahman, expert in African affairs and professor of political sciences, told Al-Monitor over Skype: “The relations between Egypt and Sudan cannot stop at the political dispute related to the rulers. The constant tensions and conflicts are transitional and do not express the countries’ strategic inclinations. Besides, geography always prevails over disputes.”

Observers of Egyptian-Sudanese affairs consider that opening the crossing is an initiative that reflects the seriousness of both governments to make way for cooperation and make it easier for people and goods to pass.

“This land crossing will be a quick road to development and communication between the Egyptian and Sudanese people. It’s enough that it will overcome the transport crisis and the increase in intra-region trade prices. The crossing will constitute a gateway for Egypt to overcome the crisis related to the consolidation of economic relations with its regional surroundings in Eastern and Central Africa,” Abdel Rahman said.

As soon as the crossing was opened, meetings took off between investors and the chambers of commerce in Egypt and Sudan to discuss the magnitude of trade deals to exchange products, especially meat, which is at the forefront of goods that Egypt needs from Sudan to achieve food security.

In spite of mutual overall positive statements between Egyptian and Sudanese officials regarding the opening of the land port and attempts at rapprochement and integration, there are still security concerns on the part of Cairo on how to manage the new land crossing with Sudan. Cairo continues to express reservations about implementing the Four Freedom Agreement signed with Sudan, which provides for the free movement of individuals between the two countries.

In an interview with Al-Monitor, an Egyptian security official said, “The transit measures through the land crossing for individuals are basically similar to those implemented at airports, as Sudanese are not allowed to enter without transit visas.”

“Before opening the land crossing, there were many security measures and agreements between the two countries to secure the route and prevent the infiltration of any element that could harm the national security of both countries. The border guards are coordinating together in this regard,” the source, who spoke on the condition of anonymity, said.

“Securing the Egyptian-Sudanese border continues to be an issue of great concern to Cairo, especially given the tension and security instability at the domestic level, which pushes Egypt to be vigilant and cautious with regard to its land ports on its borders,” he said.

Abdel Rahman commented on the Egyptian official’s statement, saying: “There is no doubt that there are clear threats posed to the Egyptian security through the borders, especially with Sudan, which are easily infiltrated given the lack of sufficient security and monitoring forces. That is why this issue remains of great concern for Egypt, which explains Cairo’s reluctance to sign the Four Freedom Agreement.”

Hani Raslan, head of the Sudan and Nile Basin Studies Program at the Cairo-based Al-Ahram Center for Political and Strategic Studies, said in an interview with Al-Monitor: “[Cairo] showed some security reservations after the escape and infiltration of some elements affiliated with the Muslim Brotherhood, especially in light of the policies by Bashir to shelter leaders and members belonging to the Brotherhood, who have fled from Egypt.

“However, both countries should have reached a security agreement before opening the route and before regulating the transit through the land port.”

On the other hand, negotiations between Sudan and Egypt are continuing about opening a land route to the west of the Nile at the Argeen port in the Halayeb-Shalateen Triangle, which continues to be a disputed area between the two governments. The dispute was renewed with the announcement of the Sudanese National Elections Commission (NEC) on Sept. 10 that the Halayeb region is considered a Sudanese electoral district.

However, the head of the General Authority for Egyptian Ports and Dry Land at the Egyptian Ministry of Transport, Maj. Gen. Gamal Hijazi, told Al-Monitor, “The Argeen road was completed three months ago, and the Sudanese side also completed the road from Argeen to Dongola over a distance of 472 kilometers [293 miles].

“There is an agreement with Sudan to establish this road, which was ratified by the Egyptian and Sudanese parliaments. The road will open by the end of the current year.”

Despite the tug-of-war between the governments in both countries, the Sudanese and Egyptians are so far the biggest beneficiaries of opening the land route, which serves as a great opportunity to improve interaction between the two peoples.