Egypt and Sudan have traded fiery statements over the disputed border region of the Halayeb-Shalateen Triangle. 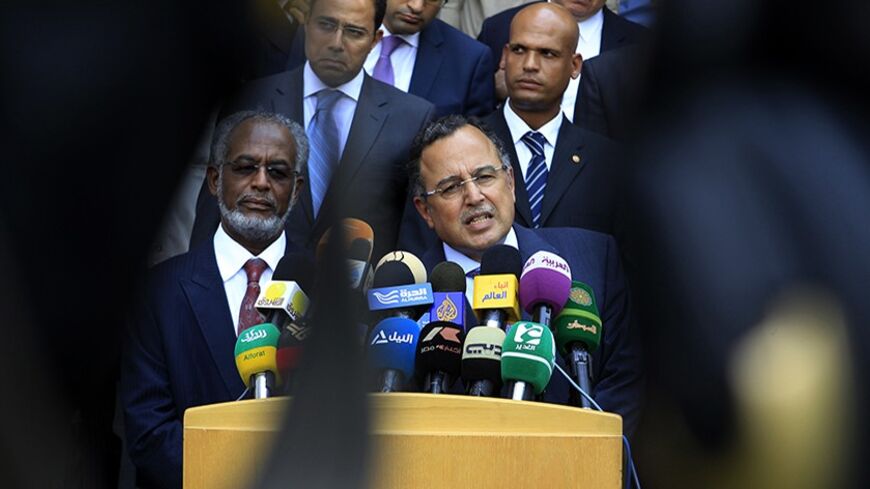 CAIRO — The Egyptian-Sudanese dispute concerning the sovereignty of the Halayeb-Shalateen Triangle continues to be a source of constant tension in relations between the two countries. The escalatory rhetoric has risen between officials from both countries, without any real diplomatic solutions on the horizon for this issue, which has been on hold since the reign of late Egyptian President Gamal Abdel Nasser and Sudan’s independence in 1956.

The debate between Egyptian and Sudanese officials was renewed this time around when Sudan’s Minister of State at the Presidency Al-Rashid Haroun announced on Jan. 6 that the Halayeb border region with Egypt was 100% Sudanese, and that discussions and understandings were possible with Cairo in this regard. Egypt, on the other hand, rejected this statement when its Foreign Ministry spokesman, Ambassador Badr Abdel Ati, issued a news release published by Egyptian media on Jan. 7, which read: “The Halayeb-Shalateen Triangle is part of Egyptian territory and subject to Egyptian sovereignty. Cairo will not accept any compromise solutions because its position is clearly defined.”

In this regard, a diplomatic source with close ties to the Egyptian government told Al-Monitor: “The relationship with Sudan is marred by many unresolved issues, particularly the dispute over the Halayeb Shalateen Triangle, which remains unsettled despite all international legal or official efforts. Add to that Khartoum’s espoused stances, which might be detrimental to Egyptian interests, such as its support for the building of the Ethiopian Renaissance Dam.”

The source, who wished to remain anonymous, explained, “This is not the right time for Cairo to deal with the disagreement over the Halayeb area with Sudan. The country is living in a state of security alert, with army troops concentrating their efforts to secure Egyptian borders, particularly in Sinai and the western border with Libya. This is a result of the fears that elements might infiltrate the country to harm Egyptian national security. The present transitional period also does not allow entering into a regional engagement with another country. But there are policies that the Egyptian government has adopted to exploit the Halayeb area for the benefit of the Egyptian economy, and to achieve real development there.”

On Nov. 27, 2013, the Egyptian cabinet formed a special committee tasked with the implementation of an urgent plan to develop the Halayeb and Shalateen area, through investments totaling 764 million Egyptian pounds ($110 million). These investments were used to complete road and water networks as well as housing projects for the settlement of the regions inhabitants. This move reflected the government’s interest in this region, considered to be one of the most important tourist and investment destinations in Egypt.

“Egypt considers the Halayeb and Shalateen region to be rich in resources, and of special strategic importance politically and economically,” said Council of Ministers spokesman, Hani Salah, speaking to Al-Monitor.

Salah added that the cabinet was considering signing agreements permitting the exploitation of the region’s gold and manganese deposits, as well as activating the Shalateen Mining Co. through coordinated efforts between the Ministry of Petroleum and the armed forces.

Deposed President Mohammed Morsi’s administration faced overwhelming popular disapproval when Sudanese officials were quoted as saying that it had expressed willingness to negotiate on restoring the Halayeb and Shalateen region to Sudan, during a visit by Morsi to Khartoum in May 2013. However, the Egyptian presidency denied those statements at the time.

With the backdrop of Egypt asserting its claim on the Halayeb region, and its attempts to exploit the natural resources and riches there, Sudan’s ambassador to Egypt, Kamaluddin Hassan, spoke with Al-Monitor about his country’s position on this issue.

“We must recognize that an ongoing problem exists between Egypt and Sudan concerning the Halayeb-Shalateen Triangle. In fact, a conflict exists as a result of Cairo and Khartoum’s insistence on their respective viewpoints in this regard. We hope that this conflict would soon be resolved in a brotherly fashion between the two countries. But I also hope that this issue not be raised again in Egyptian media because doing so has caused a lot of damage to Egyptian-Sudanese relations, and Sudan is of the opinion that our interests are greater than to be confined into one specific area,” said Hassan.

Similarly, Egypt’s ambassador to Sudan, Abdel Ghaffar al-Deeb told Al-Monitor: “The political leaderships of both countries had previously agreed that the Halayeb and Shalateen region be an integrated area used for economic development, especially after Sudanese President [Omar] Hassan al-Bashir announced that Sudan did not intend for Halayeb to be the source of disagreement and conflict with Cairo.”

Groups of political activists, headed by former member of parliament Ahmad Raslan, formed a popular delegation that went to Halayeb city, where it held a town hall meeting to assert Halayeb and Shalateen’s Egyptian identity, chanting the slogan “Halayeb is Egyptian.”

The Egyptian government also opened seven electoral stations in Halayeb and Shalateen cities during the constitutional referendum Jan. 14-15. According to official estimates, the majority of the region’s inhabitants voted in favor of the new Egyptian constitution.

The history of the conflict

The Halayeb-Shalateen Triangle lies on the African side of the Red Sea, encompassing 20,580 square kilometers (7,946 square miles). Its three largest cities are Halayeb, Abu Ramad and Shalateeen, with Egypt imposing its full security control over the region in 2000.

The conflict between Egypt and Sudan over the Halayeb-Shalateen Triangle began in 1958, after Sudan gained its independence and decided to secede from Egypt. Subsequently, the Sudanese administration included the region in Sudan’s electoral districts. Friction endured between the two countries throughout the 1980s and 1990s, with the conflict primarily focusing on petroleum and gold resources. In addition, the Egyptian army made 39 raids inside Sudanese borders in 1995. The crisis emerged anew in 2010, when Sudan insisted that the region be considered part of its electoral districts.

Hani Raslan, an expert in Sudanese affairs at the Al-Ahram Center for Strategic Studies, spoke to Al-Monitor about this issue. “Sudan resorts to causing problems with Egypt every time it faces internal unification crises and every time it tries to prevent rifts from occurring inside the country. It would have been better if it had held on to larger and richer areas of land that became part of South Sudan when the latter seceded in 2010. Furthermore, the 1899 agreement states that the border line between Egypt and Sudan lies on the 22nd parallel north of the equator; yet Halayeb is located further north of that line,” said Raslan.

As of yet, neither Egypt nor Sudan announced the adoption of official measures to solve the ongoing conflict over the region. This comes at a time when the Egyptian government is fully exploiting the area’s resources and maintaining its security control over the region.