In an interview with Al-Monitor, new Halayeb-Shalateen parliamentarian Mamdouh Amara spoke about the dispute between Cairo and Khartoum over the area, as well as the main problems facing development in remote regions. 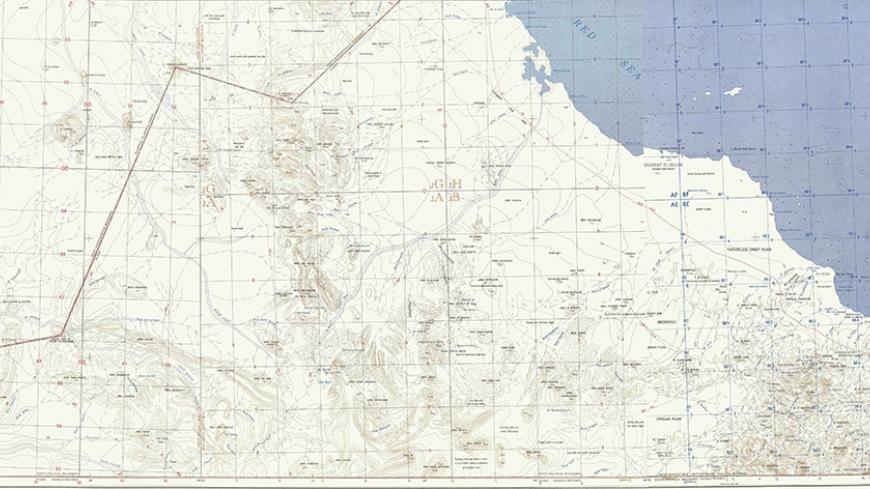 The Halayeb-Shalateen Triangle, a contested area on the border between Egypt and Sudan, is depicted on a map prepared by the US Army Corps of Engineers in 1954. - Wikimedia Commons

CAIRO — The Halayeb-Shalateen Triangle is an area of land just under 8,000 square miles (13,000 square kilometers) on the Egyptian-Sudanese border. While it is of great importance to Egypt due to its location on the country’s southern border, north of the so-called administrative boundary set by the British in the early 20th century, Sudan has been determined to lay claim to the area as a way to preserve the country’s sovereignty.

Sudanese President Omar al-Bashir has stated, “The Halayeb-Shalateen Triangle is a Sudanese area but we are not going to war for it — it will be reclaimed through negotiations.” Meanwhile, Egyptian President Abdel-Fattah al-Sisi said during a TV interview before assuming the presidency, “The Halayeb-Shalateen Triangle is part of Egyptian territory … And we urge Sudan not to start a conflict with Egypt.” For the first time ever, a representative of the disputed region has been elected to the Egyptian parliament in a bid to strengthen the country’s claim. Al-Monitor interviewed Mamdouh Amara about the problems facing his constituency, the government’s plan to develop it and the nature of the Egyptian-Sudanese dispute.

Al-Monitor:  What are the main issues the Halayeb-Shalateen Triangle is dealing with?

Amara:  The region is facing problems related to health care and education. The government has allocated 100 million Egyptian pounds [roughly $11.2 million] to develop the region’s hospital by establishing new medical departments. However, due to its remoteness from the capital, doctors refuse to work there, which raises a human resources problem. And for the same reason, teachers refuse to work in the region. This is why they should be offered incentives to encourage them to work in the Halayeb-Shalateen Triangle. We also lack science teachers.

Al-Monitor:  The government announced that it is planning to invest 764 million Egyptian pounds [$86 million] to develop the Halayeb and Shalateen area. How will the government spend these funds?

Amara:  The money will help fund the building of administrative facilities as well as developing roads, water and solar energy plants. However, the region’s main problem is not the facilities and buildings, but human resources.

Al-Monitor:  You have called for the establishment of public university branches in the region to meet its need to offer several programs of study. Are you currently in contact with the minister of higher education to achieve this goal?

Amara:  I have met the minister at the parliament and he promised to visit the Halayeb and Shalateen area to study this request.

Al-Monitor:  You have mentioned that more students in your constituency are leaving secondary school for vocational education. How will you address this issue?

Amara:  Education in Halayeb and Shalateen is on the decline due to the lack of science teachers. This is why more students are opting for vocational education. I will ask the Ministry of Higher Education to organize competitive exams to fill the gap in teachers of certain majors in Halayeb and Shalateen. This is because the last teacher eligibility tests did not take into account geographical distribution.

Al-Monitor:  Doctors are refusing to work in Halayeb and Shalateen. Do you have plans to encourage doctors to serve in your region?

Amara: I will demand a 1,000% salary raise to encourage doctors to come work in the Halayeb-Shalateen Triangle and legislation that binds doctors to work in such remote areas, in addition to bonuses to attract doctors.

Al-Monitor:  Does the Halayeb-Shalateen Triangle need special legislation from parliament to solve its problems?

Amara:  Of course we do. The current laws are hard to implement here, and we need laws that aim to develop border regions, including raising the budget allocated for development in these security-sensitive areas. Egypt’s enemies take advantage of the difficult living conditions of the people living in border regions to destroy the country.

Al-Monitor:  Why is the Halayeb-Shalateen Triangle left out of the investment plans, despite its important resources that usually attract capital?

Amara:  This is due to its distance from the capital and poor infrastructure. The government is planning to build an airport near the area. If this plan ever sees the light of day, it will be quite beneficial. The constitution stipulates that the cabinet and parliament must commit to developing border areas.

Al-Monitor:  Some are concerned that Sudan might use the harsh living conditions of the people in Halayeb and Shalateen to its advantage and assert Sudan’s sovereignty over the region.

Amara:  Any misinterpretation of the Halayeb and Shalateen issue could fuel more tension between Sudan and Egypt.

Al-Monitor:  Could the kinship between the tribes of Halayeb-Shalateen and Sudan play a role in strengthening Sudanese-Egyptian relations?

Amara:  Certainly, and even though the government called for mutual visits between those tribes and taking advantage of this relationship, both governments have to approve.

Al-Monitor:  Are there any parliamentary visits to the Sudanese parliament with the purpose of easing the tension in the Egyptian-Sudanese relations?

Amara:  The Egyptian parliament has yet to organize such visits.