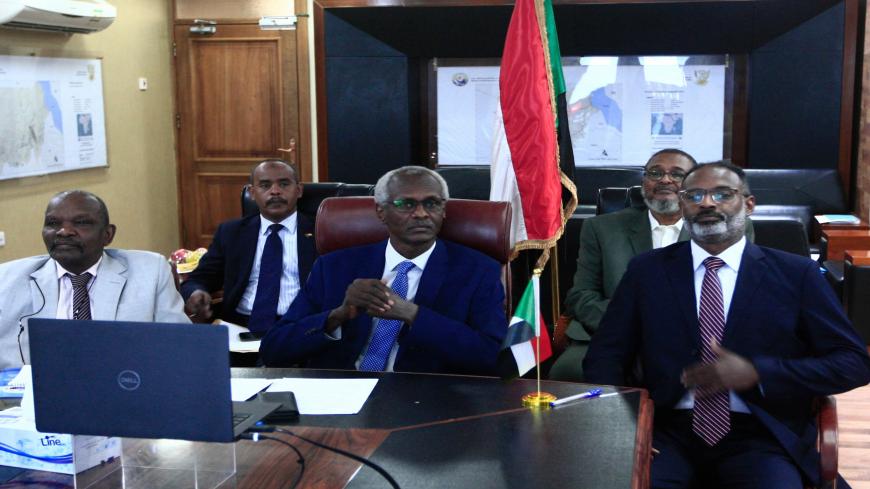 Sudanese Minister of Irrigation and Water Resources Yasser Abbas (C) participates in a videoconference with his Egyptian and Ethiopian counterparts (unseen) in Khartoum, Sudan, Nov. 1, 2020. - EBRAHIM HAMID/AFP via Getty Images

A correspondent in Egypt
November 6, 2020

CAIRO — An Egyptian military delegation, headed by the chief of staff of the Egyptian army, Mohammed Hegazy, arrived in Khartoum Oct. 31, for talks with Sudanese officials on a number of issues, namely military cooperation.

Several media outlets, most notably Al-Araby Al-Jadeed, a news website based in the United Kingdom and opposing the Egyptian regime, said the Egyptian delegation and the Sudanese military leaders will discuss the disputed region of the Halayeb-Shalateen Triangle, which lies on the border between Egypt and Sudan, and its fate.

In a joint press conference following the talks in Khartoum Nov. 1, Hegazy said the coming period will see a qualitative leap in the military relations between Egypt and Sudan, especially on the levels of military training and protecting the common borders.

Mohamed Othman Hussein, chief of staff of the Sudanese army, said at the same conference that they reached amazing results reflecting the complete agreement between the two countries on all the common issues.

However, the two officials did not mention the Halayeb and Shalateen issue.

The issue over the disputed border region has recently reemerged in light of reports about Israel supporting Sudan’s claim to the region as a condition for the normalization agreement announced between the two countries on Oct. 23. Details of the agreement have yet to be revealed.

Further fueling speculations was Israeli Prime Minister Benjamin Netanyahu, who on Oct. 27, showed a map where the Halayeb-Shalateen Triangle is part of the Sudanese territories, as he spoke via videoconference about allowing an Israeli aircraft to fly over Sudanese airspace.

Sudanese media insinuated that the video is tantamount to an Israeli recognition that the triangle is part of the Sudanese territory. While a number of Egyptian observers and politicians condemned the video, the Egyptian Ministry of Foreign affairs and other official institutions refrained from making any comments. Al-Monitor tried to reach out to the ministry spokesperson over the phone, to no avail.

Mounir Mohammad, an independent researcher on Israeli affairs and author of several publications on the Arab-Israeli conflict, told Al-Monitor that the video does not require an official response from the Egyptian state. He believes the discussions between the Sudanese and Egyptian delegations in Khartoum probably did not tackle the Israeli position on the disputed region.

Mohammad said, “It is not up to Israel to decide on the Halayeb-Shalateen Triangle, and it cannot support Sudan in claiming the right to the triangle area or pressuring Egypt to rescind its rights to the region.”

He added that Israel had probably showed the map to please Sudan, which had allowed Israeli planes to fly over its airspace, or “to calm the Sudanese public opinion that is against any normalization with Israel and to convince it of the benefits of such a deal for some national issues, including the Halayeb and Shalateen Triangle. Yet these benefits are unrealistic and Israel cannot just grant them.”

Abdallah Sinawi, a journalist focusing on political affairs, does not agree. He believes that Netanyahu’s video has very dangerous indications. In an article he wrote Oct. 28 for Shorouk News, Sinawi said the Israeli position may point to a fuming crisis at the Egyptian southern border and to “Israeli attempts to deepen any existing dispute between Egypt and Sudan, including the conflict over the Halayeb and Shalateen border area.”

On Oct. 23, the White House announced that Israel and Sudan reached a preliminary agreement under US auspices to normalize ties, as part of US efforts to advance normalization between Israel and Arab countries. The United Arab Emirates and Bahrain already signed peace agreements with Israel in September.

Meanwhile, some regional media outlets that oppose Sisi’s regime, such as Al Jazeera, claimed in an August report that Sisi could agree on granting Sudan sovereignty over the triangle area under US pressure, particularly in case Sudan insisted on obtaining sovereignty over the area as a condition to accept the normalization deal.

Also, these regional media outlets recalled the 2016 case of the Tiran and Sanafir islands, which politicians accused Sisi of giving up to Saudi Arabia as part of the border demarcation agreement between the two countries.

Mamdouh Amara, a member of parliament representing the Halayeb-Shalateen region, denied the state’s intention to give up sovereignty of the triangle to Sudan.

He told Al-Monitor, “The issue of maritime border demarcation was a new concept and its implementation was controversial as it was unknown whether the international conventions on sea borders would put the Tiran and Sanafir islands under Egyptian or Saudi sovereignty. This issue is completely different from the Halayeb and Shalateen issue. The latter regions lie within the historical borders of Egypt that have been recognized for thousands of years. The proof is that Egyptian elections are held in Halayeb and Shalateen.”

The first round of this year’s Egyptian parliamentary elections were held Oct. 25-26 in Halayeb and Shalateen. The press and media circulated photos of voters heading to the ballot boxes to vote amid heavy army and police deployment to ensure security.

Ahmad Moukhar, a researcher focusing on Sudanese affairs at the Institute of African Studies and Research at Cairo University, said Israel is currently using the issue of the Halayeb and Shalateen Triangle to its advantage in light of the push for normalization with Arab countries. But, he said, these Israeli games will soon end, “particularly since Israel does not share borders with Halayeb and Shalateen to exert any kind of pressure in this regard.”

He added, “Saudi Arabia is the only party that could play a role in the Egyptian-Sudanese dispute over the region, given that the [Saudi] coasts face the Halayeb and Shalateen Triangle [on the Red Sea coast].”

Of note, the Sudanese government had submitted in December 2017 a letter to the United Nations, expressing its opposition to the Saudi-Egyptian maritime border demarcation agreement signed in 2016, claiming that it includes the recognition of Egypt’s sovereignty over the disputed Halayeb and Shalateen Triangle.