Border dispute among many straws weighing on Egypt's back

Egypt has upped its game in, and its claim to, the Halayeb triangle border area, as Cairo's relationship with Sudan heats up. 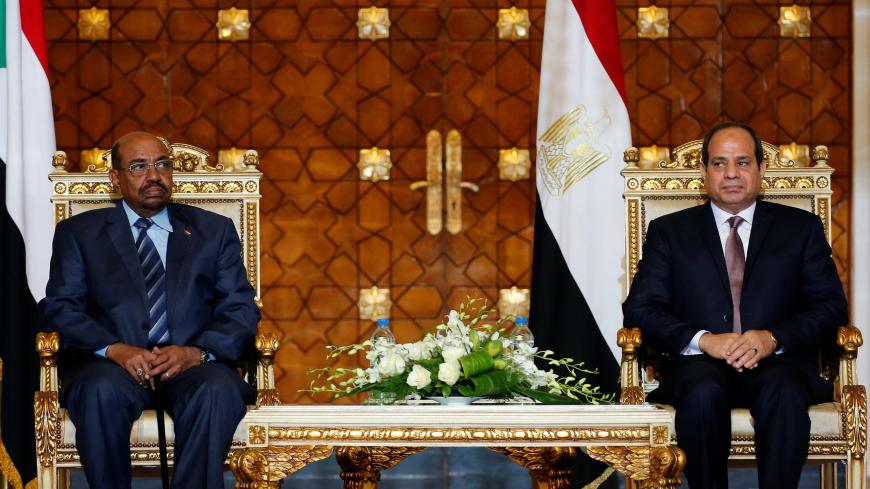 Egyptian President Abdel Fattah al-Sisi (R) and Sudanese President Omar al-Bashir meet ahead of the signing of a number of agreements between the two countries at the El-Thadiya presidential palace, Cairo, Egypt, Oct. 5, 2016. - REUTERS/Amr Abdallah Dalsh

CAIRO — The long-running land dispute between Egypt and Sudan is rearing its head again and each side is taking steps that incite the other. The tension, fueled by several issues, has grown to the point where Egyptian President Abdel Fattah al-Sisi, in an effort to calm the situation, announced today that his choice is not to go to war with Sudan or its ally Ethiopia.

The other issues feeding the discord include Egypt's concern that Sudan will let Turkey build a military base nearby and Egypt's frustration that Sudan is siding with Ethiopia in a high-stakes conflict over the Grand Ethiopian Renaissance Dam, which Egypt fears will reduce its supply of water from the Nile River.

The land feud involves the Halayeb triangle, a disputed area that encompasses the cities of Halayeb, Abu Ramad and Shalateen. Halayeb and Shalateen lie on the official border between Egypt and Sudan on ​​20,000 square kilometers (7,722 square miles, or almost 5 million acres) on the Red Sea coast. The land has been disputed for decades, but the discord has gained much media attention recently.

On Dec. 21, Saudi Arabia reaffirmed its recognition of the triangle as Egyptian territory. Sudan responded by renewing its formal objection to the United Nations regarding the Egyptian-Saudi border demarcation agreement signed in 2016.

Then on Dec. 25, Sudanese President Omar al-Bashir agreed to give Turkey — which is no friend to Egypt — temporary control of Suakin Island in the Red Sea. Turkey said it plans to renovate the ancient port, which once hosted the Ottoman navy. In return, Sudan will enjoy Ankara's military, economic and political support. Turkey also plans to develop shipyards for both civilian and military ships in the Red Sea and build a hospital, a university, a free-trade zone in Port Sudan, power stations and a new airport.

But what Egypt and Saudi Arabia fear is that Turkey will build a military base on the island, though Ankara denies it.

On Dec. 29, Egyptian Minister of Awqaf Mohamed Mokhtar made a high-profile move in the land dispute by delivering a Friday sermon in the city of Halayeb, and Friday prayers were held at Al-Tawbah Mosque there for the first time.

Mokhtar was accompanied by a delegation of senior officials from the ministry, which announced it will build 100 houses in the triangle. He was also accompanied by Minister of Higher Education Khalid Abdul Ghaffar and Gov. Ahmad Abdullah of the Red Sea governorate, who announced a large set of national projects. Also, several medical convoys organized by South Valley University in cooperation with Zagazig University arrived there to serve the region's residents.

Sudan withdrew its ambassador from Egypt on Jan. 4 and reiterated its complaint against Egypt to the United Nations Security Council on Jan. 8.

Mohamed Anwar Sadat, the head of Egypt's Reform and Development Party, told Al-Monitor that Egypt, through the recent convoys and the influx of senior officials to the triangle area, conveyed a message confirming its sovereignty over the area.

"The recent government measures are not a media stunt that will fade. There are real development projects that are not limited to economic and infrastructure projects and that include popular initiatives and serious work on the part of civil society organizations to connect with the people of that region," he said.

Egyptian parliament member Mamdouh Amara, who represents the disputed area, told Al-Monitor, "The citizens of Halayeb and Shalateen were living before 1981 in mountains and valleys without any facilities. But there are currently integrated urban communities where health, social and sports care is accessible. The state has spent 3 billion [Egyptian] pounds [$169 million] in four years in the triangle of Halayeb, Shalateen and Abu Ramad to support infrastructure. Also, a total of $56 million has been earmarked for development in slum areas, and the construction of 2,000 housing units is underway, of which about 1,500 have been completed. Add to this that the ‘Berenice-Halayeb’ road, which is 280 kilometers [174 miles] long, has been paved, and work is underway to turn the Berenice military airport into a civilian airport in order to make Berenice closer to Cairo.” Amara pointed out that the state has built primary, preparatory and secondary schools.

Abbas Mansour, the president of South Valley University, told Al-Monitor that the Sudanese claim to the triangle is weak, not only because of all the documents and treaties that confirm it belongs to Egypt, but because residents of that area love Egypt and believe its sovereignty is not up for discussion.

Shawki Abdul Latif, the undersecretary of the Ministry of Awqaf, told Al-Monitor, "The Halayeb and Shalateen triangle is an integral part of Egypt. … [The triangle] residents belong to Egypt just like babies belong to their mothers.”

Abdul Latif called on the leaders of Sudan, mainly Bashir, to reconsider what he said are their irresponsible statements that unnecessarily cause tension between the two countries. He claims the statements aim to divert people's attention from Sudan's political and economic situation, as some major opposition parties call for Bashir to be overthrown and the country continues to suffer the consequences of the 2011 secession of South Sudan, which took away 75% of the oil production — about 470,000 barrels per day.

But Sudan disputes Egypt's claim to the people's loyalty and has threatened to sue Egypt over alleged mistreatment of Halayeb residents.

“Egyptian authorities continue to target the citizens of Halayeb with arrests, harassment, torture and shooting under various pretexts," said Sudanese parliament member Ahmed Issa Omar of the Halayeb district, as quoted by the Sudanese Center for Press Services.

The Sudanese Embassy in Berlin noted in a Dec. 5 statement that Ahmed Issa Heikal, the chairman of the Red Sea parliamentary bloc in Sudan, has said previously that the Halayeb dispute will be resolved before long and Sudan will retake control: “Whatever the Egyptian authorities do, they will not be able to retake … Halayeb, Shalateen and Abu Ramad because their residents are Sudanese and an integral part of Sudan."

Amr al-Gohary, the undersecretary of the Egyptian parliament’s Economic Committee, told Al-Monitor the development of Halayeb and Shalateen is a national security issue in the wake of Sudan's recent actions regarding the Ethiopian dam and its agreement with Turkey regarding Suakin Island. A lack of development would foster terrorism, he said.