Hot on the heels of Egypt's recent ceding of Red Sea islands to Saudi Arabia, the country's row with Sudan over the Halayeb and Shalateen triangle has resurfaced. 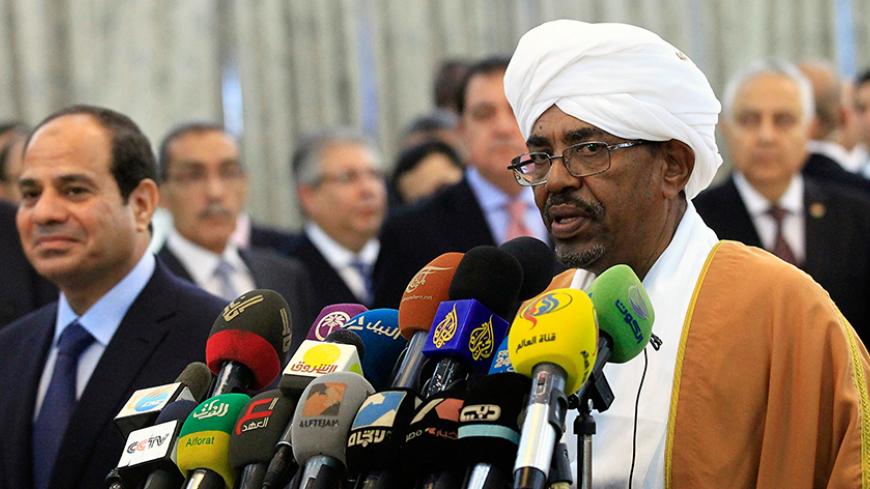 CAIRO — The maritime border demarcation agreement under which Egypt ceded the Red Sea islands of Tiran and Sanafir to Saudi Arabia has brought back to the surface the dispute between Egypt and Sudan over the Halayeb and Shalateen triangle. While Khartoum insists on international arbitration or peaceful negotiations to decide the fate of this disputed region along Egypt’s southern border, Cairo refuses to discuss the issue.

On April 17, the Sudanese Foreign Ministry issued a press release in which it called for direct negotiations with Egypt in a bid to resolve the dispute over the region, similarly to what happened with Saudi Arabia, or for international arbitration, as provided for in international law, similarly to how Egypt regained the town of Taba from Israel in 1989.

The press release, which followed numerous unsuccessful diplomatic attempts aimed at starting negotiations with Cairo, emphasized that the agreement between Egypt and Saudi Arabia regarding the maritime border also affects Sudan given its connection with the two regions of Halayeb and Shalateen and the surrounding shores. “The Sudanese Foreign Ministry is closely following up on this agreement and its consequences to make sure it does not prejudice the sovereign, historical and legal rights of Sudan in Halayeb,” read the statement.

A diplomatic official working on the African dossier at the Egyptian Foreign Ministry told Al-Monitor, “Egypt categorically refuses to discuss the issue or to go for international arbitration, and it has made this clear to Sudan during several high-level and diplomatic meetings.”

The official, speaking on condition of anonymity, said, “There should be a political settlement to this issue, which is constituting a major obstacle to Egyptian-Sudanese relations.”

He noted that the Sudanese political administration is using the dispute over the sovereignty of Halayeb “to place pressure on Cairo regarding thorny issues. Chief among these is the Nile water and the Renaissance Dam crisis with Ethiopia.”

He added, “The negotiations between Egypt and Saudi Arabia over the maritime border demarcation agreement did not address the Halayeb shores of the Red Sea, and the issue was not raised in any of the official meetings.”

Sudanese President Omar al-Bashir had asked Saudi Arabia in October 2015 to take on the role of mediator between his country and Egypt to put an end to the conflict between the two countries over the Halayeb border triangle. His request came after Riyadh played a role in ending the crisis of the Sudanese miners detained in Egypt last year.

The dispute over the Halayeb region dates back to 1902, when the administrative border between Egypt and Sudan set by the British differed slightly from the border set by the Anglo-Egyptian Condominium in 1899. According to the 1899 boundary agreement, the 22nd parallel marked Egypt’s southern border, which indicates that the Halayeb region falls under Egyptian sovereignty. However, following Sudan's independence and separation from Egypt in 1956, the dispute arose over Egypt and Sudan’s inclusion of the Halayeb area within their administrative borders. This led Sudan to file a complaint against Egypt with the United Nations in 1958. Subsequently, Egyptian forces entered the Halayeb region in 1995 following the assassination attempt on President Hosni Mubarak as Sudan was accused of involvement.

Sudanese presidential assistant Ibrahim Hamid told Al-Monitor, “We are constantly seeking to prevent the border dispute from affecting our relationship with Egypt. We gave away Sudanese territory in the city of Halfa, which was completely submerged for the sake of the High Dam construction and the Egyptian people’s interests.”

“There is an African agreement whereby borders inherited from the colonial power should be respected in accordance with international treaties and agreements,” Hamid explained.

Observers of the Egyptian-Sudanese relations believe that the dispute over Halayeb and Shalateen has always been politically used in order to place pressure on Egypt. However, the dispute has never hampered cooperation between the two countries on other issues.

Hani Raslan, Head of the Sudan and Nile Basin Studies at Al-Ahram Center for Political and Strategic Studies, told Al-Monitor, “The dispute over the Halayeb region has not impeded the signing of important agreements with Sudan, knowing that the High Dam Convention was signed at a time when Sudan was filing a complaint against Egypt near the UN because of Halayeb.”

Raslan added, “Ever since Bashir's Islamist regime rose to power, it has been using the Halayeb issue politically against Egypt, as it resorts to domestic mobilization by creating a foreign enemy and portraying Egypt as a rival and sometimes an enemy. The Sudanese now feel that Egypt is treating their country condescendingly."

“The Sudanese administration is now using the dispute over Halayeb as a pretext to justify an alliance with Ethiopia against Egyptian interests in the Nile River water. Sudan is taking pro-Ethiopia positions in the construction of dams that pose a threat to Egypt's water security,” Raslan further commented.

He also ruled out the potential issuance of a Security Council resolution in favor of Sudan, saying, “Sudan is now an internationally isolated state due to US sanctions. In order for it to pass this resolution, it must have a strong international policy to be able to mobilize and convince the Security Council to consider this issue.”

The Halayeb issue remains a fundamental reason behind the chill in Egyptian-Sudanese relations and a direct threat to Egyptian national security, despite all of Cairo’s attempts to seek rapprochement with and give special attention to Sudan, which is a priority on the Egyptian foreign policy agenda.