Lt. Gen. Abdel Fattah al-Burhan, head of state in Sudan's transitional government, has brought up once again the disputed Halayeb border area with Egypt at a time when relations between the two countries are witnessing rapprochement following the ouster of Omar al-Bashir. 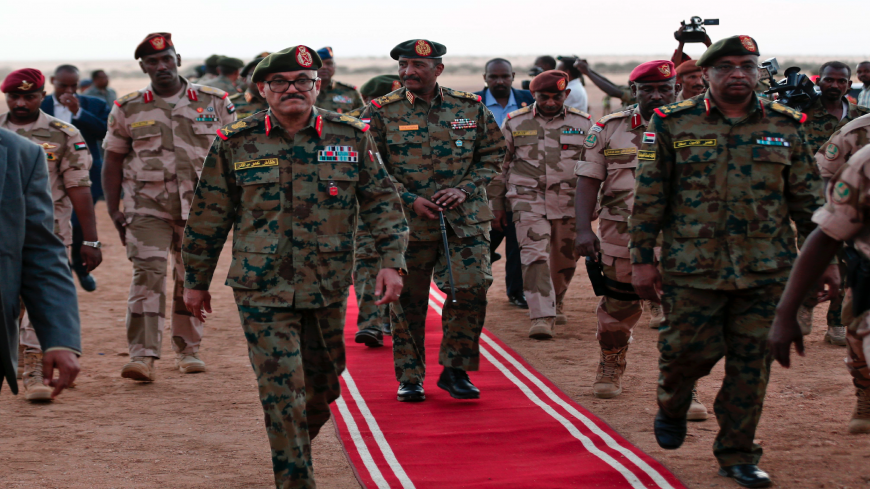 President of the Sudanese Transitional Council, Lt. Gen. Abdel Fattah al-Burhan (C), walks alongside a military officer during an army exercise on the outskirts of the capital Khartoum on Oct. 30, 2019. - Photo by ASHRAF SHAZLY/AFP via Getty Images

In a spirited speech delivered before army officers and soldiers, Lt. Gen. Abdel Fattah al-Burhan, chairman of Sudan’s Transitional Military Council, has brought up once again a disputed border region with Egypt, which has long been a source of contention between the two neighboring countries.

In a speech delivered Aug. 24 in the Wadi Seidna military zone in Khartoum on the occasion of the 66th anniversary of the army, Burhan said the army would not abandon an inch of Sudan’s territories. “We shall not abandon or forget our right until the flag of Sudan is raised in Halayeb, Shalateen and every contentious area along the Sudanese borders,” he said.

Burhan said his country’s unity and borders are widely targeted in what revived a long-standing and recurrent conflict between the two countries over the border area controlled by Egypt, known as the Halayeb Triangle, which includes the Halayeb, Shalateen and Abu Ramad areas. It is a conflict that dates back to the British colonial era in 1899.

Ever since the 1950s, Sudan has claimed the Halayeb Triangle that overlooks the Red Sea coast on the Egyptian-Sudanese border, with an area of ​​about 20,580 square kilometers (nearly 5 million acres). Sudan argues that it falls within its sovereignty.

Despite the conflict between the two countries over the mineral-rich region since Sudan gained independence from Anglo-Egyptian rule in 1956, the region has been open for trade and personnel movement from the two countries without restrictions from any party, until 1995 when the Egyptian army took control of it.

Cairo says the Halayeb Triangle is Egyptian, and in 2016 it refused to start negotiations or resort to international arbitration to determine the right to sovereignty over the region.

In March 2019, the Sudanese Foreign Ministry summoned the Egyptian ambassador to Khartoum, against the background of the Egyptian Ministry of Petroleum's announcement whereby an international bid would be opened to explore and exploit oil and gas in the disputed area.

Sudan reiterates every year its complaint before the UN Security Council regarding the disputed area, calling for international arbitration.

Ahmed ruled out that Egypt would resort to international arbitration, which requires the approval of the two countries. “Egypt considers that this issue is not a subject of dispute. The situation is stable and the region falls within Egyptian sovereignty, so there is no justification for there to be an issue,” he said.

In this regard, Ayman Shabana, professor of political science at the Institute of African Studies and Research affiliated with Cairo University, played down Burhan’s statements. He told Al-Monitor, “Burhan’s speech was just a statement made before his forces at a military ceremony, and he just wanted to preserve the stature of the army before the public opinion. Sudan will not take subsequent measures in this regard. Cairo has been used to such statements ever since Omar al-Bashir was president.”

Shabana said Burhan’s statements are not serious, and this is evidenced by the fact that Cairo did not take any diplomatic step to respond thereto. They did not summon the Sudanese ambassador to Cairo to ask him to clarify the statements, and the Egyptian Foreign Ministry did not issue a statement to respond thereto, he added.

He also said that Egypt would not take the matter seriously unless Sudan took military steps toward the disputed area, and he considered that this matter is a fictitious assumption that will not materialize.

Shabana said the political leadership in Egypt puts these statements into perspective and believes that relations with Sudan and the issues they share, such as the Grand Ethiopian Renaissance Dam file, trade cooperation and Red Sea security, are more important at the present time.

Shabana ruled out that Burhan’s statements would lead to a political crisis between the two countries. He said the Sudanese leadership has domestic priorities related to the economic situation, bringing about peace and implementing the transitional process obligations.

However, Amani al-Taweel, director of the African program at Al-Ahram Center for Political and Strategic Studies, told Al-Monitor that Burhan’s statements cannot be interpreted separately from the visit of Egyptian Prime Minister Mustafa Madbouly to Sudan Aug. 15, during which he met with Sudanese Prime Minister Abdalla Hamdok, which reflects Egyptian support for the transitional government and its reform program.

Taweel said Burhan’s statements wanted to convey a message to the Egyptian administration whereby the military is in control and has the upper hand in Sudan. “It seems that Burhan has concluded that Madbouly’s visit was in the interest of civilians at the expense of the military component,” Taweel added.

Power in Sudan is shared by the military and civilians under the umbrella of the Sovereignty Council that was formed in August 2019 for a period of three years until democratic elections are held.

The council includes five members of the military council headed by Burhan — which has ruled the country in April 2019 when the army ousted Bashir — in addition to six other members of the civilian opposition coalition that led demonstrations against Bashir’s rule in December 2018.

Members of the opposition have concerns over the possibility that the military would be motivated by greed to rule again in a country that has been for decades dominated by the military with the support of Islamists.

Taweel indicated that Burhan’s statements do not necessarily reflect the opinion of all members of the Transitional Council, especially considering that the military and civilian components accuse each other of failing to tackle the growing popular discontent about the lack of solutions to the stifling economic crisis plaguing the country.

The Sudanese army has economic institutions operating in the field of war production, meat export, agriculture and mining.

However, Burhan rejected these statements and said in a speech to the army chiefs Aug. 23 that the army companies had not monopolized the country’s resources. “There are losers who want to find something to attribute [their] failure to,” he added.

Burhan said such statements aim at stirring the pot between the army and the people, all the while attributing economic failures to the army’s investments and companies.

Taweel said the domestic instability and controversy between the internal parties has inevitably had regional repercussions on Egypt.

“The Halayeb Triangle issue is not a current priority for the two countries. … Unresolved issues can be discussed within joint high committees that will convene to develop a vision for resolving these types of issues,” she added.