Sudan recently announced it was including the disputed Halayeb area as an electoral district for its elections in 2015, proving a setback to Egypt-Sudan relations that were gradually improving after Abdel Fattah al-Sisi’s election as president. 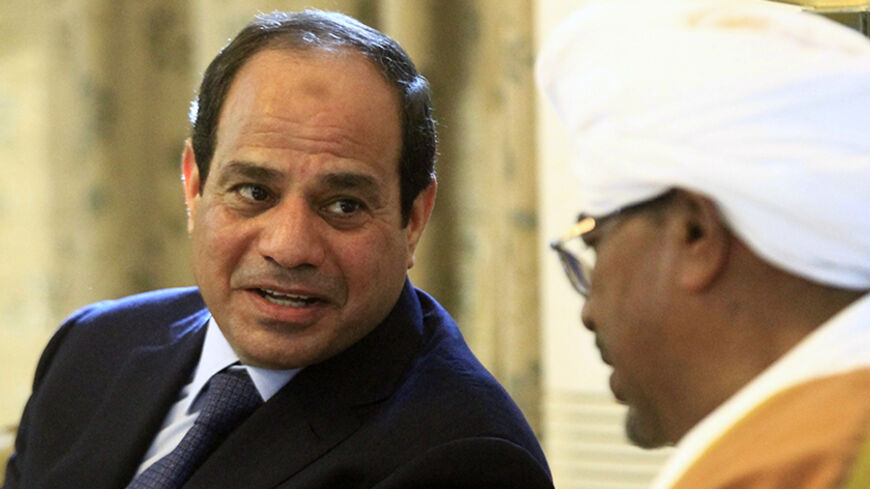 CAIRO — Egyptian-Sudanese relations are currently witnessing a silent confusion after Khartoum approved an earlier decision to declare the disputed area of Halayeb and Shalateen, on the borders of the two countries, an electoral district for both the parliamentary and presidential elections at the beginning of 2015.

Cairo is also preparing to conduct parliamentary elections with the participation of the same electoral district at the end of this year, and considers this area to be an integral part of Egyptian territory, according to the Egyptian Foreign Ministry.

This creates further complications, especially with the increasing demands from political parties in Egypt that Egyptian President Abdul Fattah al-Sisi act quickly to resolve the matter before the Sudanese elections, believing that Sudan has violated international law with its decision, which they described as anti-Egyptian.

In accordance with international law, a single area cannot be adopted as an electoral district by two countries. International law professor Ahmed Rifaat told Al-Monitor, “There are three types of borders that separate countries, according to international norms: the administrative, customs and political borders. The most important of these is the political border since it is linked to the idea of a state’s sovereignty within its territory.” Rifaat considered Sudan’s decision to include Halayeb within a Sudanese electoral district as a violation of international law, since Sudan does not have the right to supervise elections within Egyptian borders.

He also explained that Egyptian sovereignty over the area of Halayeb is defined by lines of demarcation in accordance with international agreements, while an administrative understanding between the two countries was issued in 1902 to authorize Sudan to administer the affairs of Sudanese tribes displaced to those lands. Rifaat added, “Egypt canceled this agreement, and there are no longer Sudanese tribes in Halayeb and Shalateen.”

Egyptian political analyst and columnist Attia Issawi told Al-Monitor that there are three possible solutions to the matter.

The first option is to conduct a referendum in the region on whether residents wish to remain with Egypt or join Sudan; this worries the Sudanese, who fear a majority will vote in favor of Egypt.

The second option is to refer the case to international arbitration, an option feared by both parties. They are both convinced of certain procedures they see as legally binding. The Egyptians cling to the convention of 1899, which stated that the border line is at 22 degrees north, meaning the land is part of Egyptian territory. Sudan bases its argument on the administrative resolution issued in 1902, which gave the authority to the British occupation and the Egyptian-Sudanese leadership that ruled Khartoum, and for them to be responsible for the area, since it is closer geographically to Khartoum. While this decision was taken by Egypt at the time, it was an administrative resolution, not an international agreement like the 1899 border demarcation Egypt uses as its basis for its claim to the area.

On the other hand, the Sudanese Electoral Commission announced that the area of Halayeb has been a Sudanese electoral district since 1953, and Khartoum refuses to give up a single inch of land.

However, Myriam al-Sadeg al-Mahdi, deputy leader of Sudan's National Umma Party (NUP), told Al-Monitor by phone that the escalation of the Halayeb crisis, and the announcement from the current Omar al-Bashir regime about national sovereignty in this region, is only a reflection of the crisis of Egyptian-Sudanese relations following the coup on the Muslim Brotherhood in Egypt.

"Unfortunately, the current regime in Sudan distanced the issues of Halayeb and the waters of the Nile from their true context, and made them subject to political positions," Mahdi said. "Under the reign of the Muslim Brotherhood and [President Mohammed] Morsi in Egypt, the issue of Halayeb was not raised, while Sudan sided with Egypt on its opposition to the Ethiopian Renaissance Dam, without taking into account the Sudanese interest. However, today, in light of Sisi’s presence, they support the Renaissance Dam and returned to discuss Sudan's sovereignty over Halayeb."

Mahdi demanded that both the Egyptian and Sudanese regimes work to put the issue of Halayeb back in its legal context, to resolve it in accordance with legal documents, as well as taking into consideration the opinion of people from the region.

The political secretary of the Popular Congress Party of Sudan, Kamal Omar, criticized both the Egyptian and Sudanese governments for using the area of Halayeb for political blackmail in the absence of a genuine desire to end the crisis, as well as both parties’ refusal to resort to international arbitration.

With regard to including Halayeb in the electoral district for the parliamentary elections scheduled for the end of this year in Egypt, and the votes of its citizens in the Sudanese elections early in 2015, Omar explained to Al-Monitor in a phone interview that this represents a violation of international law, which has never happened before. “The citizens of Halayeb cannot have a duplication of national loyalty, and this requires the attention of both the Egyptian and Sudanese regimes," he said.

The setback in relations comes after there were signs of gradual improvement following Sisi’s visit to Khartoum shortly after his presidential victory this year, and the opening of a new land port linking the two countries. Sudan’s decision to consider the Halayeb area as a Sudanese electoral district once again highlights the confusion that surrounds Egypt-Sudan relations.

The issue of Halayeb and Shalateen becomes a flashpoint in Egypt-Sudan relations each time there is a crisis between the two, and fades when relations improve. The current escalation over the disputed area is a clear indication that ties between Egypt and Sudan are in need of repair.