Although claiming to be independent, some suggest Sudan may in fact be on Ethiopia’s side with regard to the latter’s dispute with Egypt over the Renaissance Dam. 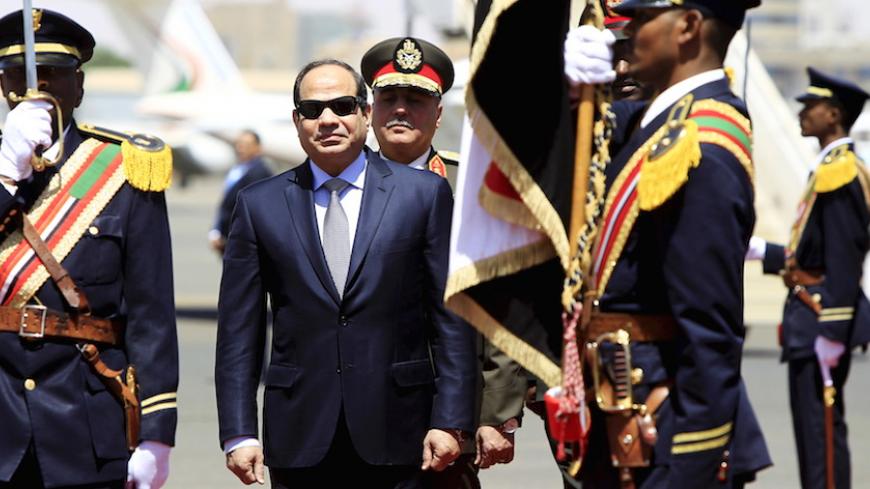 Egyptian President Abdel Fattah al-Sisi (C) inspects a guard of honor upon his arrival at Khartoum International Airport, ahead of a signing ceremony of an Agreement on Declaration of Principles between Sudan, Egypt and Ethiopia on the Grand Ethiopian Renaissance Dam Project, in Khartoum, March 23, 2015. - REUTERS/ Mohamed Nureldin Abdallah

CAIRO — There are fears that the dispute over Halayeb and Shalateen, a small border region claimed by Cairo and Khartoum, will cast its shadow over Egyptian-Sudanese coordination on the negotiations over the Renaissance Dam between the two countries and Ethiopia.

On April 18, state-owned channel Ethiopian TV interviewed Sudanese President Omar al-Bashir, who said that the dam benefits both Sudan and Ethiopia. Egyptian media considered this declaration as clearly reflecting the escalating crisis on the Halayeb triangle between Cairo and Khartoum. Bashir's remarks came a few hours after Sudan demanded, in an official Foreign Ministry statement April 17, direct negotiations with Egypt to resolve the crisis in a way similar to how it dealt with Saudi Arabia in regard to the islands of Tiran and Sanafir or via international arbitration. But Cairo rejected the demand, stressing that the triangle is Egyptian territory and that it will not negotiate or resort to international arbitration on the matter.

The Halayeb area is located on the African side of the Red Sea. The area contains three major towns: Halayeb, Abu Ramad and Shalateen. The area belongs to Egypt politically and administratively but is subject to a border dispute between Egypt and Sudan.

A government source in the Egyptian Committee on the Renaissance Dam told Al-Monitor that Egypt fears that the Halayeb and Shalateen crisis with Sudan would escalate to a new stumbling block in the Renaissance Dam negotiations between Egypt, Sudan and Ethiopia. Cairo had put in place a number of alternative scenarios to resolve the crisis of the hampered technical track, and Egypt counts on Khartoum’s support for the Egyptian position toward Addis Ababa.

According to the source, who spoke on condition of anonymity, the Halayeb and Shalateen issue had affected the Renaissance Dam negotiations several times before.

In February, there was tension during the meeting in Khartoum of the Renaissance Dam Tripartite Commission between the Egyptian and Sudanese delegations. Egypt objected to the maps supplied by the French companies conducting border studies between Egypt and Sudan, as the maps showed the disputed Halayeb and Shalateen area to be situated on the Sudanese side of the border. The meeting ended with Egypt requesting that topographic maps that do not show the border demarcation between the three countries be used instead.

Ambassador Mona Omar, who is the former deputy foreign minister for African affairs, told Al-Monitor that the Sudanese president's remarks — in which he said that the dam brings many benefits — shows that the Sudanese position in the dam negotiations completely differs from the Egyptian position. “There are currently no negotiations over the Renaissance Dam between the three countries. The matter depends on ending the crisis of the contracts with the consulting firms involved in producing technical reports regarding the damage that the dam could cause Egypt and Sudan. … Our chance now depends on the French advisory reports becoming internationally recognized documents proving the damage caused by the dam,” she said.

Samir Ghattas, an Egyptian member of parliament and head of the Middle East Forum for Strategic Studies, expected Sudan to use the Halayeb and Shalateen issue to pressure Egypt in the Renaissance Dam negotiations by likening the issue to that of the Tiran and Sanafir islands. “The result is the same whether or not Egypt complies with the request to sit down and negotiate the Halayeb crisis because Sudan supports Egypt only in official statements, while in reality Sudan is an ally of Addis Ababa in all of the latter’s decisions with regard to the Renaissance Dam,” he told Al-Monitor.

Ghattas pointed out that the Egyptian government is adjusting its negotiating line by requesting a political track parallel to the technical negotiations, which have exhausted their utility in light of the harm that will befall Egypt when the dam starts undergoing tests in a few months.

For his part, Hani Raslan, the head of the Nile Basin Studies Unit at Al-Ahram Center for Political and Strategic Studies, told Al-Monitor that Sudan’s bargaining with Egypt regarding the Halayeb issue will directly impact the dam negotiations in the coming period, saying, "Sudan will use the Halayeb crisis as a pretext to justify an open alliance with Ethiopia against Egypt."

Raslan said that Khartoum tried to hide the Sudanese-Ethiopian alliance by making contradictory statements, either by pretending to mediate between Egypt and Ethiopia or by announcing that it is a completely independent party.

On the dam negotiations, a government source pointed out that the recent visit by Egyptian Minister of Irrigation Mohamed Abdel Ati to Sudan and Ethiopia to push the negotiations forward resulted in an agreement to resume the work of the Tripartite Commission and to sign contracts with the two French companies to quickly finalize their studies determining the dam’s negative effects.

Raslan said that the contracts will probably be signed despite Egyptian reservations about how the studies are being conducted and their design flaws that may cause inaccurate results. This would be a collapse of the Egyptian negotiating position and a big failure, according to him.

From time to time in the past, Khartoum denied accusations that it was siding with Ethiopia because of the Halayeb dispute. Egypt used this denial to grasp at straws as it tried to find an ally in its negotiations, but it seems that things are changing after the direct confrontation over Halayeb and Shalateen between the Egyptian and Sudanese foreign ministries.