Sudan and Ethiopia have recently agreed to resume the negotiations on the Nile dam that Addis Ababa is building, amid Egyptian silence. 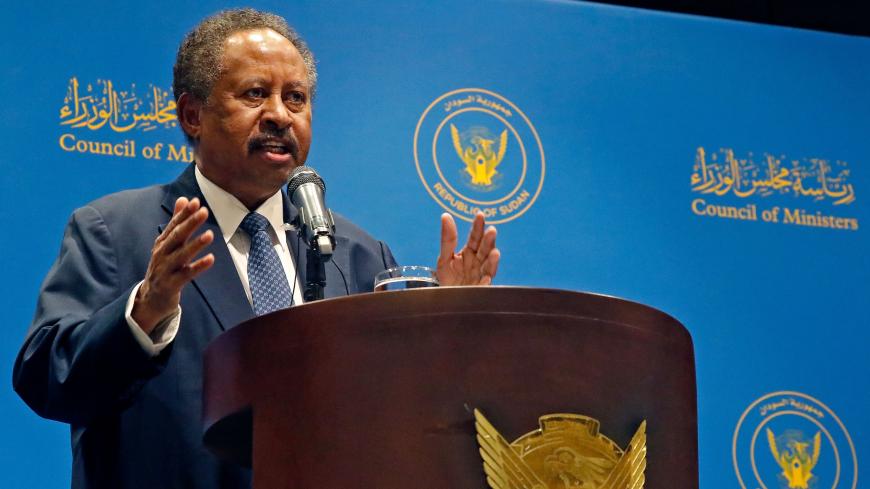 Sudan recently backtracked on its position regarding the resumption of its participation in negotiations over the controversial giant hydroelectric dam  Ethiopia is building on the Blue Nile, as Khartoum and Egypt continue to voice concerns over its effects on the Nile water flow.

Sudan announced Dec. 13 that it had reached agreement with Ethiopia for negotiations on the Grand Ethiopian Renaissance Dam to resume within a week. The announcement came during Sudanese Prime Minister Abdalla Hamdok’s visit to Addis Ababa, where he met with his Ethiopian counterpart, Abiy Ahmed.

On Dec. 14, Celchi Bekele, the Ethiopian minister of water, irrigation and energy, visited Sudan, where he met with Sudanese Water and Irrigation Minister Yasser Abbas to discuss the resumption of the tripartite negotiations over the dam.

The two ministers agreed to resume negotiations and grant a greater role to African Union experts to allow them to converge the views of the three countries under the African Union umbrella.

However, Abbas backtracked Dec. 15 on the agreement to resume the talks, saying at a press conference in Khartoum that there was no specific date for the resumption of negotiations. He attributed the delay to the fact that both his country and Egypt want to agree on a new methodology of negotiations with Ethiopia. He said that his country wants a different methodology for negotiations, and that Sudan would refrain from participating unless there a new approach.

Abbas said his country agrees with Ethiopia on the need to give African Union experts a greater role in the dam talks, but ruled out a bilateral Sudanese-Ethiopian agreement that would exclude Egypt. He said there is still a chance for the African Union to play a role in the negotiations to reach a tripartite agreement.

Ahmed al-Mufti, a Sudanese expert in international law on water, told Al-Monitor that Abbas confirmed the rapprochement with Ethiopia but provided no details.

Mufti said the recent Sudanese moves are giving Ethiopia more time to turn the status quo into a fait accompli and unilaterally implement the electrical generation phase in June 2021 and then the second filling phase of the dam in July 2021.

Sudan boycotted the last round of negotiations with Egypt and Ethiopia held Nov. 21. It was the first time that Khartoum had refused to attend the negotiations.

Sudan rejects the methods of negotiations between the three countries, saying they have proven useless over the past rounds.

The African Union has no objection to expanding the role of its experts in the negotiations. The chairperson of the African Union Commission, Moussa Faki, said in a Dec. 10 statement that he hoped the parties to the crisis would allow the African Union to help resolve the outstanding disputes.

On Nov. 4, the three countries failed to agree on the experts’ role in the negotiations or on the methodology, paths and timetable for the talks. Egypt opposed a detailed Sudanese proposal on granting a greater role to the African Union experts to converge views and propose compromises. Meanwhile, Ethiopia agreed to maximizing the role of the African Union experts, and presented a similar proposal to Sudan's.

Experts who spoke with Al-Monitor questioned the ability of the African Union experts to reach a compromise formula acceptable to the three parties, claiming some experts may be biased. This comes amid concerns that Ethiopia would exploit the dispute between Cairo and Khartoum and prolong the negotiations.

Last year, the United States tried, upon the request of Egypt, to mediate the crisis by hosting four months of talks in Washington with the participation of the World Bank. However, the negotiations collapsed in February; Egypt unilaterally signed a draft agreement on filling and operating the dam, while Ethiopia did not attend the signing and Sudan refused to sign.

Cairo says the dam could adversely affect its annual share of the Nile River, on which it relies to meet more than 95% of its freshwater needs. About 85% of the Nile water comes from the Blue Nile, where the $4.6 billion dam is being built. Meanwhile, Addis Ababa says the dam is vital for greasing the wheels of its economy and lifting millions out of poverty.

Sudanese officials say they think the dam can regulate the Blue Nile waters and generate electricity Sudan can benefit from. However, it is seeking guarantees regarding its safe and adequate operation in order to preserve its own dams, including the Roseires Dam, the largest in Sudan.

There are pending technical issues as far as the Grand Ethiopian Renaissance Dam is concerned, including how it would operate during  drought years; how much water would Addis Ababa release to the two downstream countries? There are also pending legal issues such as whether the agreement and its dispute resolution mechanism should be binding to the parties, which is what Egypt and Sudan are calling for.

Mohamed Abdel Ati, the Egyptian minister of water resources and irrigation, told the Saudi Asharq News service Dec. 12 that if the three countries show political will, his country is willing to resume negotiations at any time.

Hani Raslan, head of the Sudan and Nile Basin Countries Unit at Al-Ahram Center for Political and Strategic Studies, ruled out that any Sudanese-Ethiopian rapprochement or coordination efforts regarding the dam negotiations would come to fruition, especially amid the mounting tensions on the border between the two countries.

Raslan told Al-Monitor that the escalation occurring on the Sudanese-Ethiopian border indicates that the relationship between the two sides has become lukewarm in the wake of a unilateral Sudanese honeymoon with Ethiopia during the dam negotiations.

The Sudanese army announced Dec. 15 that its forces were ambushed by Ethiopian forces and militias during a security patrol in the Jabal Abutiour area in the state of Gedaref, which is adjacent to the Ethiopian border. Four Sudanese army forces, including an officer, were killed in the incident.

But Ethiopia’s prime minister said Dec. 17 that the incident would not affect his country’s relations with Sudan.

Sudanese newspaper accused the Ethiopian army of being involved in the incident.

Raslan disagreed with Sudan’s call for giving a greater role to African Union experts and Khartoum's refusal to resume talks. “The Sudanese negotiating delegation should have announced the suspension of its participation in the negotiations as a result of the Ethiopian intransigence in reaching an agreement satisfactory to the three countries,” he said.

Asked about the future of the negotiations, if resumed, Raslan said, “Ethiopia will issue the same old positions it has been issuing for a whole decade in order to prolong the negotiations and impose a fait accompli. Unfortunately, the Sudanese negotiating delegation has always been a partner in such efforts.”