Sudanese reports recently revealed that the United Arab Emirates is seeking an initiative to bring the views of Egypt, Sudan and Ethiopia closer so as to break the deadlock in the negotiations on the Grand Ethiopian Renaissance Dam. 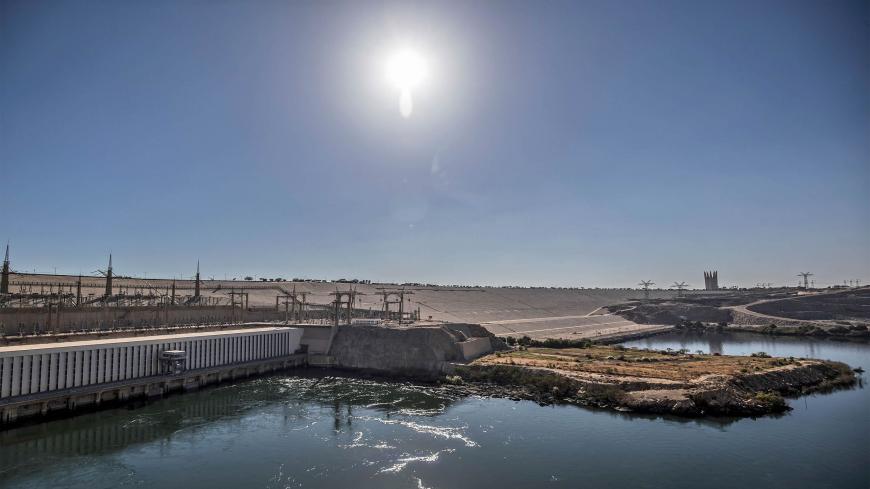 A general view shows the High Dam in Aswan, some 920 kilometers south of the capital Cairo, Egypt, Jan. 3, 2021. - Khaled Desouki/AFP via Getty Images

CAIRO — The Sudan News Agency (SUNA) reported Jan. 13 that the United Arab Emirates (UAE) is seeking an initiative and mediation to converge the views of Egypt, Sudan and Ethiopia with the aim to break the deadlock in the negotiations on the Grand Ethiopian Renaissance Dam (GERD).

According to SUNA, an Emirati Foreign Ministry delegation visited Khartoum Jan. 12 where it met with officials from the Sudanese ministries of foreign affairs, and irrigation and water resources. The Sudanese officials briefed the Emirati delegation about Sudan’s position in the GERD dossier. A well-informed source cited by SUNA said the Emirati initiative did not come upon a Sudanese request.

The UAE has yet to officially comment on the report, while Emirati media have remained radio silent.

A few days earlier, on Jan. 10, Khartoum announced the failure to reach a binding and legal agreement on the filling and operation of the dam during the latest round of GERD negotiations between Egypt, Ethiopia and Sudan, sponsored by the African Union (AU). “We cannot continue this vicious cycle of circular talks indefinitely,” Sudanese Irrigation Minister Yasir Abbas said in a statement, calling for a change in the negotiations’ mechanism.

In another statement released Jan. 11, Abbas said that his country requested that the AU experts play a greater role to facilitate negotiations and bridge the gap between the disputed parties. A day earlier, Egypt, along with Ethiopia, had expressed reservations on the Sudanese proposal to expand the role of AU experts.

Observers and experts on the Nile water file who spoke to Al-Monitor believe that the UAE move may lead to understandings between the three countries, as the UAE enjoys good relations with all three parties.

Tarek Fahmy, a professor of political sciences at the American University of Cairo, told Al-Monitor over the phone, “The Emirati move comes at a critical time amid the failure of the three parties [Egypt, Ethiopia and Sudan] to reach a binding agreement during the last meeting. This failure indicates that the negotiations are part of a vicious circle and that the negotiations management through the AU has failed.”

According to Fahmy, the UAE initiative is also “an attempt to end the current border dispute between Sudan and Ethiopia, which threatens to spill into a military conflict that will destabilize the Nile Basin countries, and eventually Egypt.”

Sudan and Ethiopia are currently engaged in a border dispute in Al-Fashqa region. On Jan. 14, Khartoum banned flights over the disputed border area claiming an Ethiopian military aircraft entered its airspace in what it described as “a dangerous escalation.”

On Jan. 13, the UAE called on both Sudan and Ethiopia to avoid further escalation and stressed “the importance of their key and active roles in the stability and prosperity of Africa and the region.”

The Emirati Al-Watan newspaper wrote in its editorial piece Jan. 15, “Any border disputes, particularly if tainted with violence, will consist of a stumbling block to any potential agreement [in the GERD issue].”

Fahmy noted, “It is the first time that the UAE has taken serious action in this dossier, which is a positive move since the Gulf country is well appreciated and well respected by the three sides. Also, the UAE has major investments in the Nile Basin and the Horn of Africa, which explains its keenness to maintain stability in the region.”

He believes that “the UAE may use its investments as a card to pressure Addis Ababa to yield to serious negotiations. Joining this dossier delivers a clear message that the UAE supports the Egyptian administration’s position in the GERD dossier. That is another political dimension of the cooperation between the two countries.”

Anadolu New Agency said in a Dec. 2 report that the UAE has invested in more than 90 projects in Ethiopia in the agriculture, industry, real estate, construction, drilling, mining, health and hospitality sectors.

Abbas Sharaki, head of the natural resources department at Cairo University's Institute of African Studies and Research, told Al-Monitor via phone, “The UAE’s role is of tantamount importance particularly since the AU-sponsored negotiations failed because of the lack of a serious political will to solve the crisis in Ethiopia and the latter’s increasing inflexibility due to its domestic problems. This is added to the fact that the AU has weak influence on the three countries, unlike the UAE.”

He noted, “The UAE meets all requirements to serve as a mediator given that it enjoys good relations with the three countries and has investments in all of them."

Sharaki added, “The Ethiopian side has always rejected mediation and that applies to the US interference in the GERD file last year. Addis Ababa refused to sign the Washington declaration back then, claiming that the Trump administration is biased toward Egypt. Ethiopia should not in any case try to impose a fait accompli by continuing to fill the GERD reservoir.”

He said in case the tripartite negotiations fail, “The UN Security Council will be the last resort for all sides and the international will will be imposed on all of them.”

Hani Raslan, head of the Sudan and Nile Basin Countries Unit at Al-Ahram Center for Political and Strategic Studies, told Al-Monitor, “The UAE supports and has good relations with the Ethiopian regime. Yet it has not made any efforts lately so as to make the Ethiopian position more flexible or try to contain the crisis.”

He said, “The success of the UAE initiative depends on the suggested content [of this initiative] as well as on the will and support to make such an initiative a success. The initiative will be welcomed in case it meets the legitimate Egyptian and Sudanese demands. Water is a question of life and death and a national security matter for Egypt, and there are redlines not to be crossed.”

He explained that Egyptian Minister of Water Resources and Irrigation Mohamed Abdel Ati’s visit to Khartoum Jan. 14 aimed to discuss and coordinate positions on the GERD negotiations, following the Egyptian reservations on the Sudanese proposal to expand the role of AU experts in the negotiations.

Meanwhile, Egyptian President Abdel Fattah al-Sisi hosted Jan. 14 a Sudanese military delegation, headed by Lt. Gen. Shams El Din Kabbashi, a member of the Sovereign Council of Sudan. Their discussion was centered on the latest developments in the Sudanese-Ethiopian border crisis and the GERD issue. Sisi said he is looking forward to the continuing cooperation and coordination on all matters of mutual interest with Sudan.

Fahmy concluded, “Time does not serve Egypt or Sudan, which are pressured to continue to negotiate with Ethiopia. The closer we are to the second phase of filling the dam, the bigger the problem. The UAE steps are taken in this context.”