The latest round of talks between Egypt, Sudan and Ethiopia over the controversial Nile River dam again collapsed amid Sudanese objections and calls for African Union experts to take on a greater role in resolving the dispute. 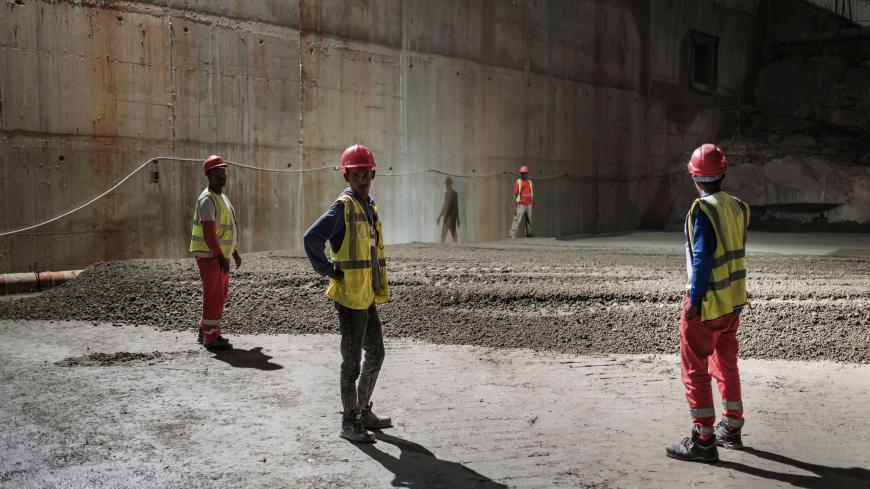 Workers stand at the construction site at the Grand Ethiopian Renaissance Dam near Guba in Ethiopia, on Dec. 26, 2019. - EDUARDO SOTERAS/AFP via Getty Images

CAIRO — The latest round of negotiations brokered by the African Union on the filling and operation of the Grand Ethiopian Renaissance Dam (GERD) between Egypt, Sudan and Ethiopia has ended with another failure. The dispute resurfaced over the role of experts and observers representing the AU and the World Bank and their role in facilitating the dialogue and resolving the dispute over technical and legal issues.

The ministers of foreign affairs and water for Egypt, Sudan and Ethiopia met Jan. 10 during the last round of negotiations led by South Africa, the current AU chair, in a bid to reach a binding legal agreement on the rules for filling and operating the dam, based on the recommendations of the AU Commission that convened several times in 2020.

The Egyptian Ministry of Foreign Affairs explained the reason behind the failure of the latest meeting in a Jan. 10 statement on Facebook. “Sudan insists on mandating experts appointed by the AU Commission to propose solutions to the controversial issues and to elaborate the GERD agreement. Egypt and Ethiopia have reservations about this proposal, due to the right of the three countries to formulate the texts and provisions of the agreement for the filling and operation of the dam. The AU experts are not specialists in the technical and engineering fields related to the management of water resources and the operation of dams.”

The ministry did not name any measures that Egypt will take, saying only that the South African minister of foreign affairs, who spearheaded the meeting on behalf of the AU, will submit a report to the president of South Africa and look into the what can be done.

Sudan’s Minister of Water Resources Yasser Abbas expressed Sudan's strict stance in this round of negotiations in statements to the Sudanese News Agency after the meeting ended. He said, “We called for changing the negotiation mechanism and widening the role of experts to enable them to play a key role in facilitating the negotiations. We cannot continue this vicious cycle of endless discussions regarding the direct threat the GERD poses to the Roseires Dam, which has a storage capacity of less than 10% of the GERD capacity, if the operation and filling proceed without an agreement and daily exchange of information.”

Sudan submitted a strongly worded note to Ethiopia and the AU in protest against the Ethiopian minister of irrigation's letter to the AU, Sudan and Egypt Jan. 8 announcing his country’s resolve to continue filling the dam to a second target in July at a rate of 13.5 billion cubic meters, with or without an agreement. The Ethiopian minister wrote that Ethiopia does not have to notify or or exchange information with the downstream countries prior to filling and operating the dam.

The Ethiopian Ministry of Foreign Affairs' statement issued after the Jan. 10 meeting blamed Sudan for the failure of the talks, but asserted that Ethiopia is heeding the Sudanese concerns regarding security, exchange of information and other technical matters. The statement added, “Ethiopia took the initiative to immediately establish an effective and reciprocal data exchange mechanism.”

The calm tone of the Ethiopian Foreign Ministry’s statement stands in contrast to the strict stance Addis Ababa had taken at the onset of the round of negotiations on Jan. 3. It had asserted that it would not accept any agreement regarding the GERD without a comprehensive water treaty in the Blue Nile to change the unjust status quo and that it would not accept any agreement that would undermine its right to use that water.

The latest round of negotiations comes as part of the meetings held at the level of presidents and ministers of water and foreign affairs under AU brokerage launched six months ago. Egypt had referred the GERD dispute to the UN Security Council in June 2020, and it was agreed that dialogue would resume under the AU.

The current meeting took place amid an escalation between Khartoum and Addis Ababa. There is a border dispute in Al-Fashqa region, which is part of Al-Qadaref state in eastern Sudan. The situation almost reached war between the two countries when the Sudanese army intervened on Dec. 26 and liberated it from the Ethiopian farmers who had occupied it with the help of Ethiopian militias for years.

Egyptian observers believe that the strict Sudanese stance during the latest round of talks will not appease Egypt and note the unlikely prospects for coordinating on joint positions, evidenced by the difference in opinion between the Egyptian and Sudanese technical and political delegations during the talks.

Hani Raslan, a specialist on African affairs and the Nile Basin at Al-Ahram Center for Political and Strategic Studies, told Al-Monitor, “The Sudanese position appears to be tough, but what it is proposing is not the appropriate means to reach a solution. It is also insisting on giving a greater role to AU experts in resolving the dispute between the three countries, as these experts are not specialists in water and dam matters.”

Raslan added, “The main problem lies in the Ethiopian intransigence and the lack of political intention to sign any binding agreement.”

Raslan said, “South Africa must now take a firm stand through the AU against Ethiopia or declare the AU’s failure to reach a solution. But these options are unlikely due to South Africa’s collusion with Ethiopia and support for its stances since the beginning of the negotiations.”

The Democratic Republic of the Congo (DRC) will assume the presidency of the AU in its next session at the beginning of February. The DRC, an upstream country, has supported Cairo in negotiations on managing the Nile water. It was the only upstream country that did not sign the Entebbe agreement, which Egypt and Sudan rejected for not protecting their historical rights to the Nile waters.

Raslan said, “The DRC’s presidency of the AU might be better to some extent, at least in holding a party accountable for the failure of negotiations.” He added, “The AU’s mediation is bound to fail due to the structural imbalance, which showed that the slogan of ‘African solutions’ is a tool to waste time, stall and exploit the AU to serve political interests.”

Rawiya Toufic, a professor at the Faculty of Economics and Political Sciences at the University of Cairo, told Al-Monitor that the change in Sudan will not alter the nature of the dispute and the complicated track of negotiations. She said, “The Sudanese stance is not enough to change the Ethiopian perspective. The Sudanese statements varied in intensity and concern toward the unilateral Ethiopian behavior, but the gist of its stance did not change much.”

She noted, “Egypt and Sudan agree that there should be a binding legal agreement including clear rules to solve the current and future disputes over the dam. Ethiopia, however, is still stalling, while no middle ground exists. Either Ethiopia agrees to have a binding agreement or no agreement will be reached at all. We cannot bank much on the change of the AU presidency, as it is not an influential factor.”

Tensions between Egypt, Sudan and Ethiopia continue, and the prospects of achieving progress at the annual African Union summit in February remain bleak.