Egypt, Sudan kick off another round of Nile dam talks

A new round of meetings between the Nile Basin countries has resumed as Sudan and Egypt try to unite on controlling damage from the Ethiopian dam. 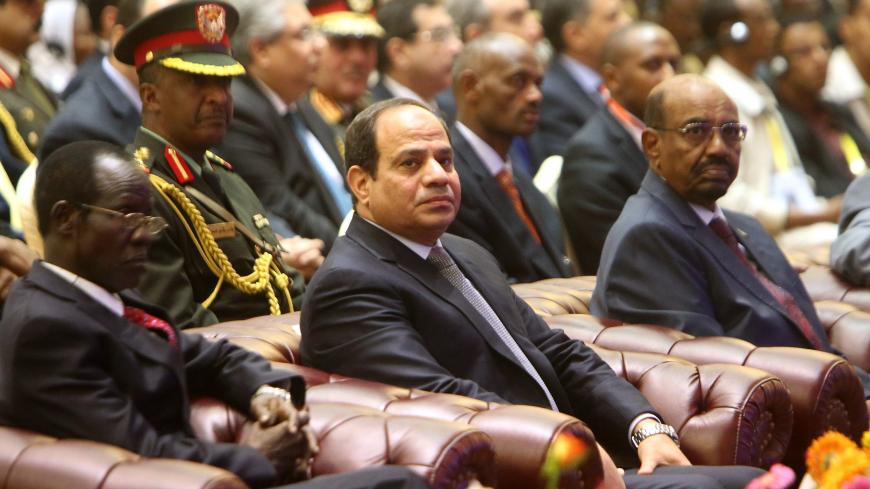 The second round of GERD negotiations sponsored by the African Union were suspended Aug. 10. The second round of talks came at Sudan’s request after Ethiopia refused to sign an agreement on how the GERD should be filled and operated. Egypt and Sudan sent letters Aug. 5 to South Africa, which heads the AU, expressing their rejection of Ethiopia's unilateral filling of the GERD.

An Aug. 15 Egyptian-Sudanese statement following the discussions between Madbouly and his Sudanese counterpart, Abdullah Hamdouk, outlined conditions for the resumption of negotiations with Ethiopia. The statement read, “It has been agreed to continue negotiations to reach a binding agreement about filling and operating the dam. It is also important to reach an effective and binding mechanism to settle disputes and a coordination mechanism between the three countries to ensure the safety of operation of all facilities and water projects affected by the dam.” The statement stressed the need “to avoid any unilateral measures before reaching an agreement that pleases all three parties.”

A well-informed Egyptian government source told Al-Monitor, “The Egyptian-Sudanese stances were largely aligned during the recent rounds of negotiations, while Ethiopia stalled on reaching a binding agreement in the GERD issue. Sudan now realizes the danger of Ethiopian stalling … as this would affect Sudan’s water interests.”

Egyptian-Sudanese coordination on the Nile water affair is not new. The two countries were on the same page during negotiations with the upstream Nile countries on an organizational and legal framework in the Entebbe Agreement, beginning in 1999 and ending in 2010. The upstream Nile countries signed the agreement without the approval of Egypt and Sudan, who froze their membership in the Nile Basin Initiative in June 2010. But this Egyptian-Sudanese cooperation started to fade in light of the policies adopted by the ousted Sudanese regime headed by Omar al-Bashir, who mirrored the Ethiopian policy. As a result, Ethiopia and Sudan had similar stances and defended the GERD during the negotiation talks at their onset in 2011. But since the fall of Bashir, Sudan has been expressing stances closer to Egypt.

Sudan's former ambassador to Egypt, Abdul Mahmoud Abdul Halim, told Al-Monitor, “Madbouly’s visit was not just a matter of protocol. Its timing and content are important for coordinating united stances to resume the GERD negotiations.”

Abdul Halim noted, “Egypt and Sudan wanted to underline their desire to continue the negotiations under the AU umbrella to resolve the pending issues and reach a binding agreement for the operation and filling of the dam, boost their credibility and intention for dialogue through Africa and push the AU to fulfill its responsibilities in resolving the dispute among the African countries.”

Amani al-Tawil, director of Egypt and Sudan research at the Sudan Center for Strategic and Policy Studies, told Al-Monitor, “The Egyptian-Sudanese coordination in the GERD issue might be a good step, albeit insufficient, in facing the strict Ethiopian stances on the negotiation table.”

Tawil said, “The unified Egyptian-Sudanese stances might help curb the Ethiopian stalling, but there should be space for pressure from regional and international parties that can influence the Ethiopian stance, like the Gulf countries that have strong investments in Ethiopia.”

During a meeting between the foreign and water ministers of Egypt, Sudan and Ethiopia Aug. 16, it was decided to resume technical negotiations Aug. 18, when each state submitted its own proposal for a unified agreement on the dam’s filling and operation. They agreed to choose a technical and legal representative from each country to compile the proposals submitted by Egypt, Sudan and Ethiopia, with the participation of observers from the World Bank, the United States, the European Union and the AU.

Hani Raslan, an adviser at Al-Ahram Center for Political and Strategic Studies, told Al-Monitor, “Ethiopia does not want any agreement that binds it on how to use the water. Its stances have proven that its main goal behind the GERD is water hegemony over the Blue Nile, as a prelude to strategic hegemony over the Horn of Africa and the Nile Basin.”

Raslan added, “Ethiopia adopted a negotiation strategy in the past years that still stands. It creates new obstacles during each round of negotiations then calls for their resolution, only to disagree later over the procedural dimensions of the suggested solutions. Besides, Ethiopia is overwhelming the negotiations with details to distract focus from the main agenda or goal behind them and to debilitate Egypt and Sudan and leave them with no choice but to withdraw from the negotiations. With that, Ethiopia can justify taking unilateral measures related to using the Nile waters.”

The current round of negotiations is expected to continue until Aug. 28 and a joint proposal is to be presented to South African President Cyrille Ramaphosa. The ability of Egypt and Sudan to hold all the parties to the outcome of the negotiations depends on the success of these negotiations. A successful agreement would be comprehensive and binding, cover all the technical and legal aspects of both storage and operation of the dam and avoid harming Sudanese and Egyptian interests, as well as set clear mechanisms to resolve disputes and coordinate joint water management.