Egypt and Sudan are currently increasing coordination on the issue the controversial dam Ethiopia is building on the Nile River. 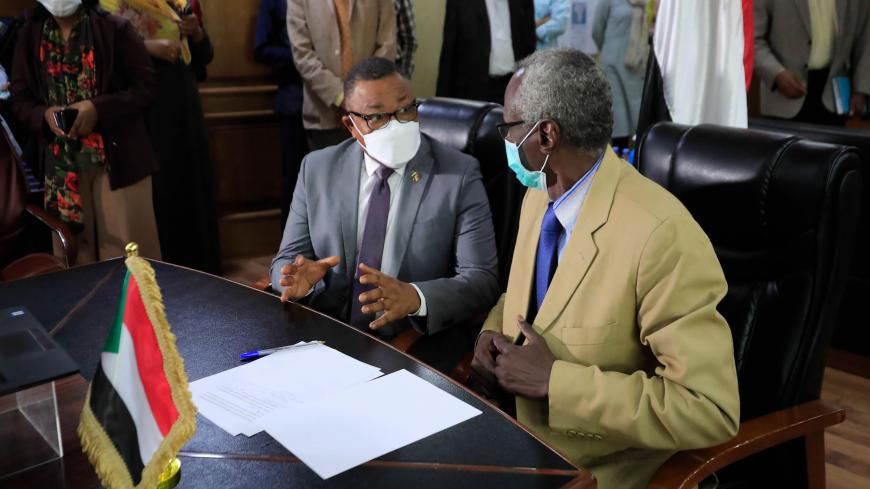 Sisi had not visited Khartoum since the Sudanese revolution and the ouster of President Omar al-Bashir in April 2019. The official and diplomatic relations between the two countries had gained momentum recently, culminating in the military cooperation agreement. The chief of staff of the Egyptian army, Lt. Gen. Mohamed Farid, who arrived in Khartoum March 2, described the agreement as “achieving an unprecedented level of military cooperation … at a time when Egypt and Sudan face common challenges and multiple threats to the national security of the two countries.”

Speaking at a press conference following his March 6 meeting with Abdel Fattah al-Burhan, head of Sudan’s Sovereign Council, Sisi expressed his country’s dissatisfaction with the Ethiopian stances regarding the GERD and the attempts to control the waters of the Nile, saying, “We reject any approach that seeks to impose a status quo and extend control over the Blue Nile through unilateral measures that do not take into account the interests and rights of the two downstream countries,” stressing that the GERD affects the vital interests of Egypt and Sudan.

Speaking about the possibility of resuming the GERD negotiations, Sisi said, “We discussed ways to put the negotiations back on track by forming an international quartet made up of the United States, United Nations, European Union and African Union [AU] to mediate in the negotiation process,” noting that reaching a fair, balanced and legally binding agreement regarding filling and operating the GERD before the next flood season is imperative.

During a March 5 call between Egyptian Minister of Foreign Affairs Sameh Shoukry and UN Secretary-General Antonio Guterres, Shoukry stressed his country’s support for a Sudanese proposal to expand the umbrella of mediators in the GERD negotiations to be through an international quartet since the AU’s efforts to reconcile the three countries and formulate an agreement that would achieve the interests of all had failed.

Meanwhile, Ethiopia began to impose a fait accompli policy and initiated the first phase of filling the GERD in July 2020, and announced its intention to complete the second phase by storing 13 billion cubic meters of floodwater next July.

In a meeting with leaders, officers and soldiers of the armed forces during an educational symposium of the Egyptian army on the occasion of Martyr Day on March 9, Sisi reiterated Egypt's keenness to resolve any pending issues with Ethiopia through negotiations, saying, “We have always remained calm without showing emotion, pretension or antagonism and we insist on resuming negotiations.”

He continued, “These negotiations will certainly come to an end and we must reach a binding legal agreement."

An Egyptian government source familiar with the Nile Basin file told Al-Monitor on condition of anonymity, “Resorting to international quartet members as mediators instead of observers [in the GERD negotiations] has become an Egyptian-Sudanese condition to resume negotiations. Many scenarios [which he did not name] can happen if Ethiopia refuses to agree to the international quartet mechanism and resume negotiations in good faith in order to reach a binding legal agreement on the GERD in a way that secures the strategic interests of Egypt and Sudan in the Nile waters and preserves Ethiopia's rights to generate electricity.”

Article 10 of the Declaration of Principles signed by Egypt, Sudan and Ethiopia in March 2015 stipulates that the three countries commit to settling any dispute through talks or negotiations and they can ask for mediation. However, since Egypt raised the dispute with Ethiopia to the UN Security Council in June 2020, the AU-brokered negotiations failed to make any progress over six months on the pending legal issues in terms of reaching a binding agreement that guarantees the protection of the Egyptian-Sudanese water security from any future Ethiopian actions, be it in the GERD or any other water projects on the Blue Nile.

Ethiopia refused to resume negotiations through any international mediator other than the AU, as Ethiopian Foreign Ministry spokesman Dina Mufti revealed in a statement March 9, saying, “Solving the outstanding issues does not require other mediators. This tendency to adhere to agreements of the colonial era in the name of reaching binding agreements is unacceptable.”

Observers believe that coordination and joint Egyptian-Sudanese positions will be the strongest card to confront unilateral Ethiopian stances, especially with further Egyptian-Sudanese cooperation in the military field at a time when Sudan faces another security crisis with Ethiopia in al-Fashqa region in eastern Sudan, where armed Ethiopian groups are trying to gain control with the help of the Ethiopian government.

Sayed Fleifel, a professor of African studies at Cairo University, told Al-Monitor, “Sisi's visit to Sudan had a strategic nature, especially in the context of political tension with Ethiopia over the GERD on the one hand and the tension on the Sudanese-Ethiopian borders on the other. Cairo is well aware of the strategic importance of Sudan, which has always been a political supporter to Egypt.”

Speaking about military cooperation, Fleifel noted, “There has always been ongoing coordination [between Egypt and Sudan]; after the 1967 [Arab-Israeli War and the Egyptian military defeat], all Egyptian military and air colleges moved to Khartoum, and the new army recruits were trained in Sudan, while Sudanese forces participated alongside Egypt in the October War [also known as Yom Kippur War in 1973].”

Maj. Gen. Nasr Salem, a retired officer of the Military Intelligence Service and former adviser at Nasser Military Academy, told Al-Monitor, “Cooperation with Sudan in the military field and others will strengthen Egypt's negotiating positions with Ethiopia to reach a political and technical solution before the second filling in July, especially since Ethiopia is now facing both Egypt and Sudan together.”

He added, “There has been no coordination in the positions between Egypt and Sudan throughout the negotiations with Ethiopia on the GERD since 2012. Without a doubt, the [current] unified Egyptian-Sudanese position will be stronger in the face of any unilateral Ethiopian actions.”

Salem added, “Egypt firmly rejects any unilateral Ethiopian action, and we hope that any developments will be in the interest of the Nile Basin countries without having to take any other measures, as Cairo is still dealing with this conflict through diplomatic and legal solutions.”

As the Egyptian-Sudanese ties gain further momentum, questions remain about the strength of the tools that the two countries possess in persuading Ethiopia not to dispose of the Nile River's water unilaterally and to stop any preparations for the second filling until an agreement is reached, so long as it protects the two downstream countries and ensures coordination and joint management of the waters of the Blue Nile with trust and good faith.