Fears have arisen that the negotiation process over the Renaissance Dam will be affected by political tension in Sudan after its suspension from the African Union. 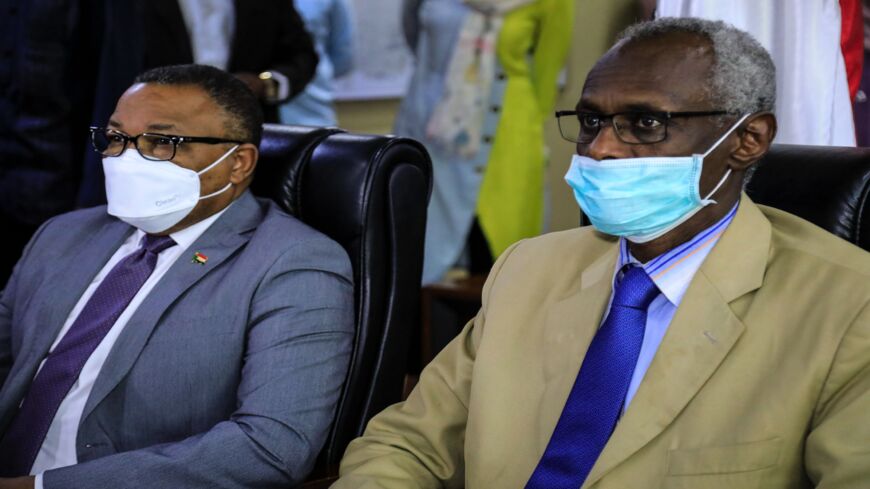 Sudan's Minister of Irrigation and Water Resources Yasser Abbas (R) and Minister for Foreign Affairs Omar Gamar al-Din are pictured during a video conference with their Egyptian and Ethiopian counterparts, to discuss future steps in Grand Ethiopian Renaissance Dam (GERD) negotiations, in the capital, Khartoum, on Jan. 10, 2021. - ASHRAF SHAZLY/AFP via Getty Images

CAIRO — Less than 24 hours after the coup by Sudanese army chief Lt. Gen. Abdel Fattah al-Burhan on Oct. 25 against the civilian element of the transitional period, the African Union (AU) suspended Sudan's membership and participation in all of its activities.

This comes as the AU seeks a compromise formula between Egypt, Sudan and Ethiopia to resume negotiations on the Grand Ethiopian Renaissance Dam (GERD). These African efforts follow the presidential statement on the GERD adopted by the UN Security Council calling for a resumption of the AU-led negotiations.

Negotiations between Egypt, Sudan and Ethiopia are still suspended since Ethiopia completed the second filling of the GERD lake. The Egyptian and Sudanese international diplomatic escalation against Ethiopia is so far restricted to recommendations to return to the negotiating table. Meanwhile, all mediation attempts to bridge the views of the three countries or start a new round of talks to reach a binding agreement on the filling and operation of the GERD have faltered.

Prior to the dissolution of the civilian government in Sudan, Christophe Lutundula, foreign minister of the Democratic Republic of Congo — which currently holds the presidency of the AU for a one-year term — visited Sudan on Sept. 15 to discuss the possibilities of resuming negotiations.

In turn, Sudanese Foreign Minister Mariam al-Mahdi was in constant contact with Cairo to coordinate actions against unilateral Ethiopian practices during the process of the second filling of the GERD. This raised questions about the impact of the government’s dissolution and the continuation of political tension in Sudan on Egyptian movements and stances on the GERD dispute.

In this context, Amani al-Taweel, director of the African program at Al-Ahram Center for Political and Strategic Studies, told Al-Monitor over the phone that freezing Sudan’s AU membership at the present time will undoubtedly negatively affect Egyptian-Sudanese actions regarding the GERD.

“These actions will lose momentum, and the pressure against Ethiopia to return to negotiations would be eased,” she said.

Taweel argued that Ethiopia sought to disrupt negotiations by taking quick actions aimed to freeze Sudan's membership in the AU. “Such decisions are not usually rushed toward any African country, which shows that the decision was triggered by Ethiopia,” she explained. “It falls in Ethiopia's interest to have an unbiased reason it can invoke before the international community to delay negotiations until the Abi Ahmed regime settles its internal problems, most notably the ongoing tension and war in the Tigray region.”

Ever since the removal of the Omar al-Bashir regime in April 2019, Sudan — in particular its military element entrusted to run the transitional phase with the participation of the Forces for Freedom and Change — had taken hard-line stances against Ethiopia.

The Sudanese army liberated the lands of Al-Fashqa from the grip of the Ethiopians. Sudan also rejected Ethiopia’s unilateral moves in the GERD and demanded guarantees binding Ethiopia to reduce any expected adverse effects it may suffer because of the GERD.

Paradoxically, a rapprochement was felt between Ethiopia and Sudan at the beginning of the transitional phase. Ethiopia contributed to the negotiations between the Sudanese parties until the drafting of the Constitutional Charter for the 2019 Transitional Period.

Commenting on the possibility of Ethiopia returning to the GERD negotiation table, Ethiopian Foreign Ministry spokesperson Dina Mufti affirmed Oct. 28 that his country will respect and acknowledge the AU decision in this regard. Mufti said Ethiopia respects the AU’s decision to suspend negotiations as a result of Sudan’s frozen membership.

Speaking to Al-Monitor, Haidar Youssef, a Sudanese water resources expert, criticized Ethiopia’s attempt to use the current situation in Sudan as a pretext to delaying the negotiations. “Ethiopia is moving forward with the GERD construction and getting ready for the third filling without waiting for the outcomes of the negotiations, whether with Egypt or with Sudan,” he said.

He noted that the political situation in Sudan is still not clear. “Although the return to negotiations is linked to unfreezing Sudan's AU membership, the negotiations themselves would be futile if Ethiopia continues to take unilateral actions. This will remain true even if a binding legal agreement is agreed upon.”

Youssef said, “Previous negotiations were held through various administrations and governments in Sudan 10 years ago, and Ethiopia has yet to fulfill any of Egypt or Sudan’s demands after the issuance of the international panel of experts’ report. It did not conduct studies to assess the safety of the GERD or its environmental, economic and social impacts, and it continues with the dam construction.”

In this vein, Youssef warned the political tension in Sudan could outshadow the Nile water issue. He explained, “We are now experiencing a climate change as the Nile River discharges increase. … Ethiopia’s refusal to coordinate and its concealment of important information regarding the management of the filling and operation of the GERD threaten Sudan.”

Mohamed Abdel Karim, a researcher specializing in African affairs, downplayed the repercussions of tension in Sudan on the course of the GERD negotiations. He reassured Al-Monitor, “The situation in Sudan is not dangerous for Egypt. Even if the negotiations had resumed, they were not expected to bring anything new. The emerging tension in Sudan is a good pretext invoked by Ethiopia. It might take some of the pressure off Addis Ababa.”

Abdel Karim added, “The negotiations cannot be relied on to solve the GERD crisis, especially amid Ethiopia’s insistence on monopolizing the decision to complete the dam. It would be unrealistic to opt for negotiations in light of the behavior shown by Ethiopia.”

He explained that Egypt took alternative measures to indirectly confront Ethiopia by ramping up its diplomatic outreach in the Nile Basin region, such as with Uganda and South Sudan. “This is the most important alternative path for defending Egyptian interests in the Nile waters,” he said. “This would also rebuke the Ethiopian narrative that Egypt is estranged from its African surroundings.”

In his speech at Cairo Water Week on Oct. 24, President Abdel Fattah al-Sisi reiterated the need to “reach, in the shortest time possible and without procrastination, a balanced and legally binding agreement” to the GERD crisis. He warned, “No one will emerge as the winner in a reckless struggle over the source of life, which shall be provided to every human being without discrimination.”

Meanwhile, Cairo’s monthly presidency of the African Peace and Security Council as of Nov. 1 will allow it to exert more diplomatic efforts within the AU to keep any decisions issued on Sudan from prejudicing the GERD issue.

Of note, Sisi had also reiterated in a meeting with the president of the Democratic Republic of Congo on Nov. 1 his firm stance reaching a legally binding agreement on the GERD filling and operation, under the AU umbrella.