The Sudanese army carried out a military coup that will undermine the fragile democratic transition process in the country and deepen its economic crisis. 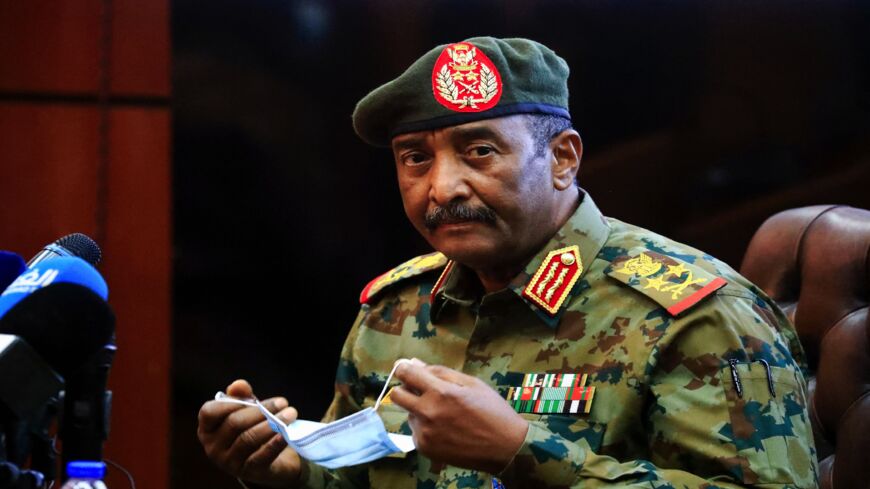 Sudan's top army general, Abdel Fattah al-Burhan, holds a press conference at the General Command of the Armed Forces in Khartoum on Oct. 26, 2021. Angry Sudanese stood their ground in street protests against a coup, as international condemnation of the military's takeover poured in ahead of a UN Security Council meeting. - ASHRAF SHAZLY/AFP via Getty Images

The Sudanese army has overthrown its civilian partners in power through a military coup that is bound to undermine the fragile democratic transition process in the country and deepen its economic crisis.

In a televised speech on Oct. 25, Abdel Fattah al-Burhan, commander-in-chief of the Sudanese armed forces, announced the dissolution of the transitional government led by Prime Minister Abdalla Hamdok, and of the Sovereignty Council, where military and civilian officials have shared power since its establishment in 2019 to oversee the transitional phase in Sudan.

Burhan said the army would take over and a technocratic government would be formed to run the country until elections are held in July 2023.

However, it remains unclear whether the Sudanese military will be ready to relinquish power by then.

Burhan also declared a state of emergency and suspended key articles of the constitutional document governing the transitional period.

After former President Omar al-Bashir was ousted in April 2019 following a monthslong popular uprising, the Transitional Military Council that took power back then and the leaders of the civilian protests signed in August 2019 a power-sharing agreement that stipulated a three-year transitional period. Subsequently, the transitional period was extended until the end of 2023 after the Sudanese government concluded a peace agreement with several armed rebel movements in the country.

Under the power-sharing agreement, the Sovereignty Council headed by Burhan was formed, and a government headed by Hamdok was established with the main task to prepare for general elections that would end with the handover of power to a civilian authority.

Hours before Burhan's speech, Sudanese military forces arrested Hamdok at his residence in Khartoum and took him to an unknown destination after he refused to issue a statement in support of Burhan's decisions, the Sudanese Ministry of Information reported.

Hamdok was released on Oct. 26 and returned to his home. It remains unclear whether he is under house arrest.

Also, during the military takeover, security forces arrested several civilian leaders from the Sovereignty Council, in addition to ministers in the transitional government and political leaders. The arrests were preceded by cutting off internet service and closing the main bridges in the country.

The Sudanese quickly took to the streets to protest against the military coup. Videos showed massive rallies that roamed the capital as protesters blocked main roads, set tires on fire and set up barricades to prevent army vehicles from crossing.

The Central Committee of Sudanese Doctors reported deaths and injuries among the protesters after the Sudanese security forces opened fire as of Oct. 26.

Major civil and professional forces in the country, including the Forces of Freedom and Change, the Sudanese Professionals Association and other parties that led the 2019 protests called for open civil disobedience and urged people to continue to demonstrate against the coup.

The Doctors Syndicate announced a general strike in hospitals except for emergency cases and withdrew from military hospitals. The Sudanese Bankers' Association and Sudanese Central Bank employees also went on strike.

Sarah Abdul Jalil, a member of the media committee of the Sudanese Professionals Association, told Al-Monitor Burhan’s attempt to impart a reformist character to his decisions aims to mislead international public opinion and undermine democracy. “Burhan carried out an unconstitutional coup, and it will bring Sudan back to the stage of the Transitional Military Council.”

She believes Burhan's decisions reveal his intention to eventually refuse to hand over power to civilians.

According to the constitutional document, the Sovereignty Council should first be headed by a military figure (Burhan) before civilians assume its leadership. Accordingly, Burhan has to hand over the presidency of the council to civilians in November of this year until elections are held in 2023.

In another speech on Oct. 26, Burhan justified his decisions, saying “the army's move is not a coup but rather [aimed] to correct the course of the revolution.”

He accused the civilian forces of attempting to monopolize the transitional period and excluding the army from the scene, adding he was forced to intervene to solve a growing political crisis he claimed nearly led to a civil war.

But shortly after Burhan spoke, the prime ministry’s office issued a statement expressing concerns about the safety of the detained Cabinet officials.

The statement accused Burhan and army leaders of coordinating with Islamists and other politicians connected to the National Congress Party, Bashir’s party that was dissolved in 2019, with the aim to control the country and the Sudanese revolution.

Since the failed coup attempt on Sept. 21, tension had flared between the military and civilian politicians in Sudan, as the two sides exchanged accusations of seeking to monopolize power. Burhan had called for the transitional government to be dissolved, which was rejected.

Amani al-Taweel, director of the African program at Al-Ahram Center for Political and Strategic Studies, told Al-Monitor Burhan's decisions were expected, given the escalations that led to a stalemate between the civil and military officials.

Taweel said, “Burhan will provide assurances to the international community that a government will be formed quickly, especially since he tried to flirt with Washington when he pledged in his speech to fully abide by the international agreements signed during the transitional government period, which include normalizing relations with Israel within the Abraham Accords.”

The United States, European Union, and United Nations have all denounced the coup. US Secretary of State Antony Blinken said his country rejects the dissolution of the transitional government in Sudan by security forces and calls for its immediate restoration without preconditions.

Meanwhile, it is worth noting that Sudan’s army leaders have strong ties with Egypt and some Gulf states such as Saudi Arabia and the United Arab Emirates. The latter refrained from criticizing the military takeover and instead called on the Sudanese parties to remain calm and practice restraint.

Taweel said the Egyptian position is compatible with the Gulf position, especially with Saudi Arabia. “It seems Egypt may play a role in the next stage.”

She said the phone call between Egyptian Foreign Minister Sameh Shoukry and US Special Envoy for the Horn of Africa Jeffrey Feltman shortly after the coup in Sudan “indicates the possibility that there will be a regional move in the next stage to avoid confrontations with protesters in Sudan preserve internal security.”

Sudan is suffering under a stifling economic crisis, which is likely to be overshadowed by the military coup, at a time when the country is facing an acute shortage of bread, fuel, medicine and basic commodities, with continued unrest in east Sudan, where protesters have closed the main ports on the Red Sea and the main road between Khartoum and Port Sudan.

Heinisch said, “Hamdok was leading the discussions with donors, international financial institutions and Sudan’s major creditors on debt relief that culminated in the country reaching the decision point of the HIPC debt relief initiative in June 2021. Upon successful completion of economic reforms after another three years, Sudan is supposed to reach the HIPC completion point, which would further reduce external debt to $6 billion. This is now at risk. The US already threatened that the coup could have consequences for debt relief,” he added.

“Besides debt relief, the coup puts donor support at risk. The US has already announced a halt of $700 million in economic assistance [for Sudan]. If military rule is cemented, other — especially Western — donors will probably follow suit and suspend budget support. Furthermore, the International Monetary Fund and World Bank could halt assistance as well,” Heinisch says.

“Another point that needs attention is the future of foreign direct investment (FDI). The government targeted FDI of several billion dollars. Projects presented span different sectors and reflected the diversification efforts of the transitional government. It is now likely that investor interest faces a major setback,” Heinisch concluded.