The Sudanese military is increasing its repression of demonstrations calling for a civil state. 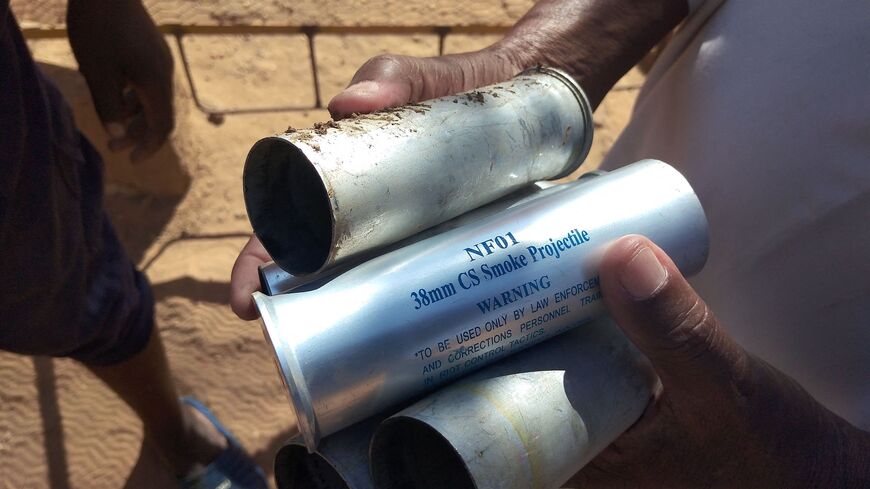 A Sudanese man holds empty tear gas canisters launched by security forces during a protest in the city of Umdurman on Nov. 13, 2021. - AFP via Getty Images

The Sudanese security forces cracked down on hundreds of thousands of pro-democracy demonstrators who took to the streets across the country on Nov. 13 to reject the army’s tightening grip on power.

According to the Sudan doctors union, security forces used live ammunition and tear gas to disperse protesters and at least five protesters were killed, four from gunshot wounds and one from inhaling tear gas.

The union, which supports the protesters, added in a statement that many protesters were injured in “brutal attacks by the security forces.”

The US Embassy in Sudan expressed deep regret over the deaths in Saturday’s demonstrations. In a tweet, it condemned the use of excessive force.

The police denied using live ammunition against the crowds of demonstrators, saying the demonstrations were not peaceful and reporting that 39 officers were seriously injured.

Pro-democracy groups in the country participated in the demonstrations, including the Central Council of the Forces for Freedom and Change (FFC-CC), the Sudanese Professionals Association and the Resistance Committees, who led the protests that ousted former dictator Omar al-Bashir in 2019.

The protests came two days after Gen. Abdel Fattah al-Burhan, formed a new Sovereignty Council, the temporary ruling authority in Sudan, with himself as its president. Last month he led a coup to overthrow the coalition of civilians that had been sharing power with the army since 2019 to oversee the transitional process.

Following the overthrow of Bashir in April 2019, the Transitional Military Council that took power in cooperation with the leaders of the civil protests signed a power-sharing agreement that determined a transitional period until the end of 2023.

Accordingly, the Sovereignty Council headed by Burhan worked with the government headed by Prime Minister Abdullah Hamdok to prepare for general elections and a handover of power to a civilian authority.

But in an Oct. 25 coup, Burhan announced the dissolution of the transitional government led by Hamdok, who has since been under house arrest along with dozens of officials and other political leaders.

The military’s seizure of power deepened its political crisis. The move was condemned by several Western countries, including the United States, along with the United Nations, the European Union, and the African Union. These parties called for a return to pre-coup conditions, the immediate release of detainees, and an end to Hamdok’s house arrest.

Since then, the country’s pro-democracy groups have denounced the coup and vow to continue mass civil disobedience in the hopes that Burhan would resign.

According to the United Nations, since the coup, at least 14 protesters have died from excessive force by the security forces. That toll does not include the protesters killed on Saturday.

Jonas Horner, senior analyst for Sudan for the International Crisis Group, told Al-Monitor that Burhan lacks the constitutional authority to appoint a new Sovereign Council and its composition is not in keeping with the requirements of the constitutional declaration that governs this transitional period.

Horner said, "Burhan's reasoning for the takeover was spurious and divorced from the reality of the country's context. The military's dissolution of the transitional government was indeed a coup," he added.

Burhan justified the coup by saying that he wants to correct the course of the revolution that overthrew Bashir two years ago. He accused the civil forces of trying to monopolize the transitional period and exclude the military. He said he was forced to intervene to solve a growing political crisis that he claimed nearly led to a civil war.

In response, Western donors that supported Sudan’s democratic transition, including the United States and the World Bank, froze their aid in an effort to pressure the coup leadership into backing down.

A joint statement by several Western powers on Nov. 12 read that the military's actions complicate efforts to resume the democratic transition.

On Nov. 11, UN special envoy to Sudan Volker Peretz said in a briefing to the UN Security Council, “The unilateral appointment of a new Sovereign Council makes it more difficult to return to the constitutional order.”

The Minister of Culture and Information in Hamdok’s ousted government, Hamza Balloul, said in a video published by his office, “Do not negotiate with coup supporters. The civil state is our choice and we will fight for it. It is the Sudanese people who have the final say.”

Balloul took part in Saturday’s demonstrations after his release earlier this month.

Sudanese civil groups called for another mass demonstration on Nov. 17, urging people to continue demonstrating until the army reverses its actions. These events could lead to an escalation with the security forces.

“There is increasing prospect of the military splintering and dividing as some sections of junior officers may begin siding with protestors. This would drive significantly increased violence. To date, protesters in the street have demonstrated in a staunchly nonviolent fashion,” Horner said.

Mediation efforts by the United Nations, the Arab League and South Sudan have so far failed.

"Despite significantly greater international pressure on the military, they are unlikely to return control of the transition or the country to civilians," Horner concluded.