The head of the Sudanese Sovereign Council, Lt. Gen. Abdel Fattah al-Burhan, called for the dissolution of the government, further escalating the tension with his civilian partners in governance. 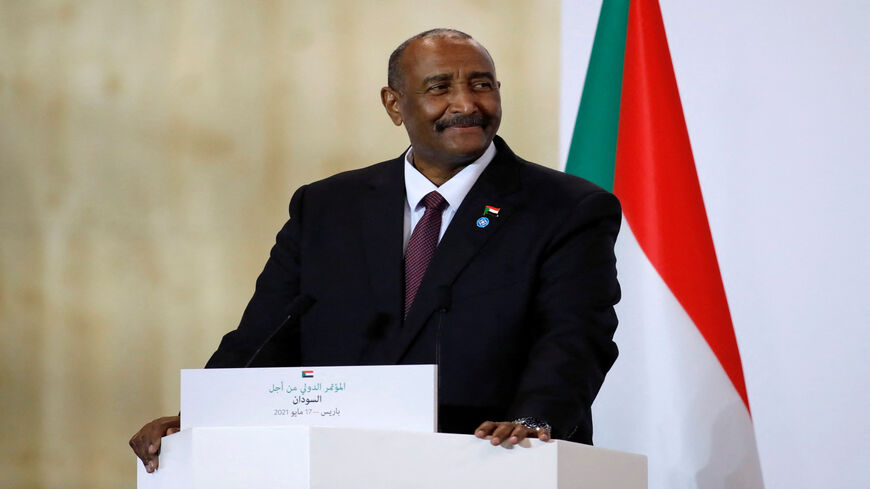 Sudan's Sovereign Council Chief General Abdel Fattah al-Burhan gives a press conference with the French president and Sudanese prime minister during the International Conference in support of Sudan at the temporary Grand Palais in Paris, France, May 17, 2021. - Sarah Meyssonnier/POOL/AFP via Getty Images

The head of the Sudanese military and chairman of the Sudanese Sovereign Council, Lt. Gen. Abdel Fattah al-Burhan, has recently called for the dissolution of the transitional government, in the latest escalation against his civilian partners in the government, at a time when the country is hit by a severe political and economic crisis that may undermine the fragile democratic transition.

Speaking to Sudanese army commanders in Khartoum Oct. 11, Burhan said that the only solution to the political and legislative crisis in the country is the dissolution of the current Cabinet and the expansion of the political parties’ participation in governance.

Burhan further called for the need to “speed up the formation of the constitutional court, the appointment of an independent chief of justice and the formation of a parliament that represents all the people, while excluding the former ruling party,” in reference to the National Congress Party of deposed President Omar al-Bashir.

Since the failed coup attempt against Sudan's transitional government Sept. 21, tension has flared between the military and civilian leaders in Sudan, with the two sides accusing each other of seeking to monopolize power.

Following the ouster of Bashir in April 2019, the Transitional Military Council that took power and the leaders of the civil protests signed in August of that year a power-sharing agreement stipulating a three-year transitional period.

The transitional period was later extended until the end of 2023 after the Sudanese government concluded a peace agreement with a number of armed rebels in the country.

The current authority consists of the Sovereign Council, led by Burhan, and a government, headed by Abdalla Hamdok, which is tasked with preparing for general elections leading to the handover of power to a civil authority.

In his Oct. 11 speech, Burhan said, “There are attempts to exclude the armed forces from the transitional landscape.”

He noted that some political forces — which he did not name — are trying to preoccupy the public opinion by fabricating problems with the armed forces and Rapid Support Forces, government forces led by the intelligence services, questioning their patriotism and involving them in issues that impede the political transition.

Burhan further stressed that the security and military services’ leadership “is not a place for political bidding and will not be subject to the current quotas, and any decision regarding it needs to be taken by those elected by the people.”

On Oct. 7, the deputy head of the Transitional Military Council, Lt. Gen. Mohamed Hamdan Dagalo, said that the council’s military component will not hand over the police and general intelligence services to the civilian government.

Dagalo’s remarks angered the government that viewed them as “a clear violation of the constitutional document” that serves as a road map for the transitional period.

Meanwhile, Burhan’s escalation toward his civilian partners came following two meetings with Hamdok to discuss the political crisis in an attempt to settle differences between the military and civil wings of the authority.

But Burhan's latest statements indicate that the talks reached a dead end.

Amjad Farid, a former adviser to Hamdok, said that the government dissolution or Cabinet reshuffle is an inherent right of the prime minister or the transitional legislative council only when formed, not for any other party.

Farid told Al-Monitor, “While Burhan demanded the dissolution of the government based on his position in power, he has no right or authority to do so. Even if he expresses his opinion as a regular Sudanese citizen, this behavior is irresponsible given the position he fills in the transitional power bodies.”

Farid said, “Burhan does not have separate powers other than the administrative powers delegated to him by the  council he heads. The Sovereign Council exercises its constitutional powers as a single body, in which decisions are taken by a two-thirds majority according to the constitutional document. Therefore, [Burhan’s] call is unconstitutional, contrary to the law and irresponsible.”

The Sudanese press recently reported that the General Intelligence Service imposed a travel ban on influential leaders in the government, further fueling the crisis. Most of the leaders targeted by the ban are members of the Empowerment Elimination, Anti-Corruption and Funds Recovery Committee that is tasked with dismantling the financial and political legacy of Bashir.

However, in an Oct. 13 statement, the General Intelligence Service denied any involvement in this matter and said that it was not within its mandate to impose any travel ban.

On Sept. 26, military leaders had removed the security forces guarding the members of the Empowerment Elimination, Anti-Corruption and Funds Recovery Committee. The army also removed the number of bodyguards for Mohamed al-Fiqi, head of the committee and member of the ruling Sovereign Council, who had accused the army of using the failed coup as a pretext to seize power.

Jonas Horner, senior analyst for Sudan for the International Crisis Group, told Al-Monitor that the call to dissolve the government represents an overreach by Sudan’s military.

Horner said, “[The] completion of Sudan’s transition to a civilian government would imperil the military’s tight hold over the economy and its impunity over abuses during and after the Bashir years.”

The economic and political deterioration angered many Sudanese amid suspicions that the military seeks to seize power. The Forces of Freedom and Change, the main civil forces in the country, called for the transfer of the Sovereign Council’s presidency to civilians to resolve the current crisis in the country and to promote civil democratic transformation.

However, the same civil forces have become divided, as a new faction defected from the Forces of Freedom and Change. Since the failed coup attempt, this new faction has been coordinating positions with the army and calling for the dissolution of the government and the expansion of the ruling coalition. Minister of Finance Jibril Ibrahim and Darful Gov. Minni Minawi are at the head of this faction.

In addition to the deteriorating political situation in the country, Sudan is suffering from a stifling economic crisis, while civilian officials accuse the army of fomenting unrest in eastern Sudan, which led to the closure of the country's main port. As a result, Khartoum has seen severe shortages of bread, fuel, medicine and imported basic commodities in recent days. The army denied these accusations and said that the recent unrest is due to political maneuvering and mismanagement by the civilian authorities.

Since Sept. 17, the tribal Supreme Council of Beja Opticals and Independent Amaudiyas in eastern Sudan has closed all Red Sea ports and the main road between Khartoum and Port Sudan, in protest against what it described as marginalization of the eastern regions in terms of development, and called for the government's dissolution.

Farid said that the council’s demands are fair. However, he noted, “The leaders in eastern Sudan [of the tribal council] are biased toward the military authorities [in Sudan] as they attempt to weaken the civilian government by closing roads and escalating the economic and living conditions. These moves reflect the irresponsibility of the leaders in eastern Sudan in dealing with the current political crisis.”

He added, “It has become clear that the current crisis is not between the military and civilian components, but rather between forces that seek a democratic civil transition and others that want to return to dictatorship and military totalitarianism.”

Meanwhile, the United States warned that any attempt by the Sudanese military to monopolize power will lead to a resumption of the sanctions that had crippled the country during Bashir's rule, while suspending debt relief and international financing, which are among the greatest achievements of the transitional period.

Horner said, “There have been calls from Burhan to Forces of Freedom and Change breakaways and groups from the Beja [tribe] protesting in eastern Sudan for a turn away from the current and politically balanced government and a turn back to a more technocratic Cabinet. However, while government performance urgently needs to improve, this call is based rather more on narrow political interests than a genuine hope of seeing a more active and impactful government.”