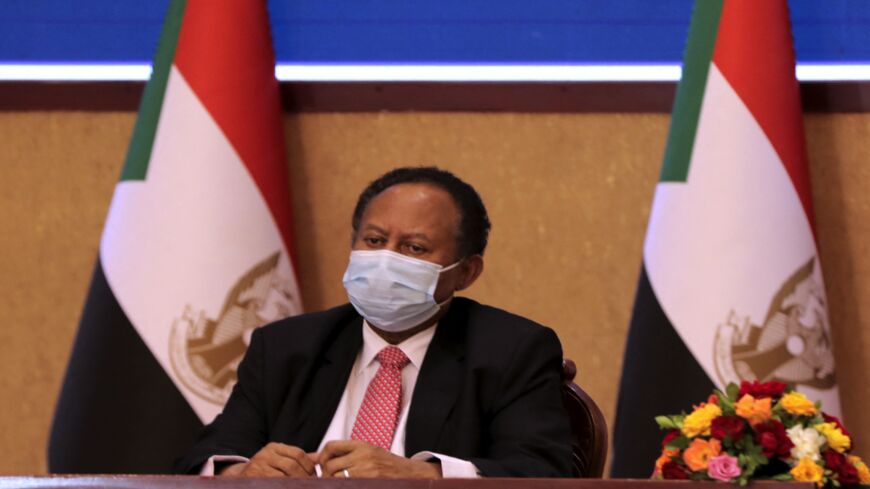 Sudan's Prime Minister Abdalla Hamdok looks on during a deal-signing ceremony with Abdel Fattah al-Burhan (unseen) to restore the transition to civilian rule in the country in the capital, Khartoum, on Nov. 21, 2021. - AFP via Getty Images

Miriam al-Mahdi said 12 of the 17 government ministers from the Forces of Freedom and Change coalition, including herself, tendered their resignations directly to Hamdok after he failed to alert them that he had been released from house arrest and had planned to make a deal with the military junta.

Speaking during a virtual event hosted by a Washington-based think tank on Monday, Mahdi described the prime minister’s move as “supportive of the coup.”

“We expect[ed] him to call us even for 10 minutes before he goes to this gathering,” Mahdi said during the Atlantic Council event today. “But none of that happened.”

Hamdok and dozens of other civilian leaders were detained by the Sudanese military under generals Abdel Fattah al-Burhan and Mohamed Hamdan Dagalo (also known as “Hemedti”) on Oct. 25.

The prime minister reportedly refused for weeks proposals to lead a new government approved by the military, which would have violated Sudan’s constitutional transition process.

The country’s longtime dictator, Omar al-Bashir, was ousted by the military amid popular protests in 2019. A joint civilian-military government has been tasked with guiding the country’s path toward democratic elections in 2023, but that was thrown into disarray last month by Burhan’s coup.

A host of world leaders and international institutions swiftly condemned the military’s move and demanded the reinstatement of the civilian government.

The Biden administration also rallied Arab Gulf leaders to publicly call for a reversal of the coup after the Wall Street Journal reported Egypt’s president personally assured Burhan of regional leaders’ support prior to the seizure of power.

Then, in a surprise move yesterday, Hamdok was released from house arrest and appeared on state television alongside Burhan. The agreement announced by the two would see the release of detained officials and Hamdok appoint a technocratic government.

The United States and the European Union praised the agreement as a first step but called on security forces to fulfill the promised release of detainees and said violence against protesters must stop.

US Secretary of State Antony Blinken said he was “encouraged” by the deal but called on all sides to “further talks and redouble efforts to complete key transitional tasks on a civilian-led path to democracy in Sudan.”

The UN’s chief envoy on Sudan, Volker Perthes, praised on Monday the release of four Sudanese Cabinet officials, adding, “But if the ‘political agreement’ is to be taken seriously, all detained should be released immediately.”

Madhi said she and other ministers were caught off guard by the agreement.

During a meeting following Hamdok and Burhan’s television announcement yesterday, the ministers agreed to release a statement calling the deal “far from the aspirations of our people” and “nothing more than ink on paper.”

Four other ministers did not attend the meeting, Mahdi said, as two of those are still detained. One other minister did not agree to resign, she said.

“We don’t question [Hamdok’s] integrity as a patriot or as a leader. … But what happened yesterday was a setback,” she said today. “We can’t take his word, but [rather] it needs to be shown by deeds.”

Why It Matters: The 14-point agreement appears to give in to the demands of the international community, but without the backing of his Cabinet, Hamdok’s domestic legitimacy appears to have suffered a significant blow.

Sudanese protesters aren’t buying the deal. Thousands of demonstrators were in the streets again on Sunday demanding an end to the military’s role in the government.

The reconciliation was also slammed by the country’s largest Islamist party, Umma, the Sudanese Communist Party and the influential Sudanese Professionals’ Association, an umbrella group for unions, which called it “political suicide” for Hamdok.

“Hamdok might have miscalculated this time because the street is ahead of him,” said Mohanad Hashim, journalist and former director of content at Sudanese state television, during the Atlantic Council event on Monday.

“What they don’t want is military oversight over Sudan,” Hashim said.

The unpopularity of the deal at home raises questions as to whether the agreement has brought Sudan any closer to stability and democratic transition.

“What we’re looking at here is a weaker prime minister who is bereft of his political support system,” said Kholood Khair, managing partner at Khartoum-based think tank Insight Strategy Partners.

“This begs the question: What can the prime minister do now to push through these transitional priorities when he doesn’t have a buffer between himself and the military?” Khair said at the Atlantic Council event.

The agreement is vague on the path forward toward implementing transitional steps toward the 2023 elections. Political wrangling over just such steps was used by Burhan as a pretext for last month’s coup, suggesting the new agreement may prove to be more theater than substance.

“The deal itself is kind of unstable, and that raises questions about how long it can last,” said Khair said.

What’s Next: Some $19 billion in international debt relief for Sudan remains frozen. It remains to be seen whether the World Bank, the United States and other international donors will accept the agreement and restore paused aid.

Price said Sudan’s return to the path toward democracy “starts with the reinstitution of the prime minister, but it certainly doesn’t end there.”

The Biden administration is calling for the full implementation of Sunday’s agreement and the lifting of the military’s state of emergency in Sudan, Price said.

Earlier on Monday, Mahdi praised the United States' role in urging international leaders for a unified message condemning Burhan’s coup and forcing the concessions but said more pressure is needed.

“The message they need to convey to the military is that they cannot mess with political parties,” she said earlier today.

Mahdi said the outcome of Hamdok’s deal with the military remains to be seen, but the international community and “especially the US can take it in the right direction.”

Hamdok on Monday told Reuters that he agreed to return to the premiership in part so as to preserve the country’s economic opening to the world after decades of isolation.

"We will continue our contacts with international financial institutions, and the new budget that will begin in January will proceed on the path of economic reform and open the door to investment in Sudan," Hamdok said.

Know More: Sudan’s protest leaders are showing little sign of backing down after 15 people were killed last week in the deadliest day since the military seized power last month.