Sudan’s prime minister, Abdalla Hamdok, has resigned amid fears of a civil war owing to a severe political deadlock. 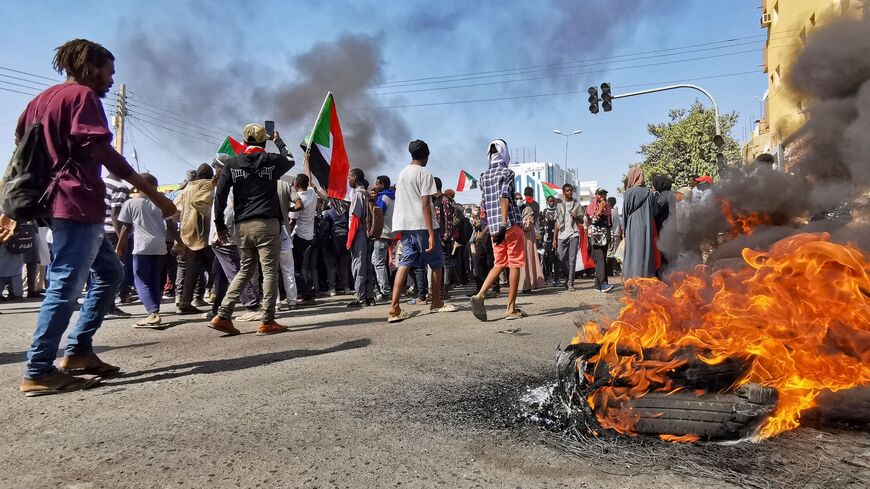 Sudanese protesters rallying against the military, walk past tires set ablaze by fellow demonstrators in the capital Khartoum, on Jan. 6, 2022. -The protests came following the resignation of the civilian prime minister Abdalla Hamdok, leaving the military fully in charge. - AFP via Getty Images

CAIRO — Sudan's prime minister Abdalla Hamdok affirmed he was stepping down from his position amid political deadlock following the military coup that disrupted the country's fragile transition to democracy.

Hamdok, representing the civil movement, made the announcement Jan. 3 in a speech broadcast by Sudanese television.

“I have had the honor of serving my countrymen for more than two years. During this period, I sometimes did well and sometimes failed,” he said. “I have decided to return to you what you have entrusted me with and I announce my resignation from the post of prime minister.”

Hamdok warned that the major crisis plaguing Sudan, which is primarily political, “is about to become a comprehensive crisis,” pointing out that the division between the civilian and the military components was reflected in the performance of the Sudanese state and urging for dialogue as a solution.

Addressing the army, Hamdok said, “The people are the final sovereign authority.”

Muhammad al-Orabi, former Egyptian foreign minister and member of the parliamentary foreign relations committee, opined, “The Sudanese political forces must promptly unify their demands to preserve the supreme interests of the country. The perpetuation of the political division exacerbates the political, economic, and social crises, in light of continued mass protests, albeit peaceful.”

Orabi assured Al-Monitor that the Sudanese people alone should decide their fate. “Experience has proved that the people’s will must be fulfilled. Hamdok’s resignation will not affect the political scene much, because his reinstatement after the events of Oct. 25, 2021 was rejected by a wide section of the Sudanese people. This is why a cabinet that has the support of the street must be formed expeditiously.”

Hamdok's resignation comes during political tension in Khartoum, after several rallies across all parts of Sudan, rejecting the political agreement concluded Nov. 21, 2021 between him and Gen. Abdel Fattah Al-Burhan, the current head of the Sovereignty Council and Sudan's de facto ruler.

Hussein Haridi, Egyptian ambassador and former assistant foreign minister, told Al-Monitor that Hamdok's resignation "reflects the lack of political and national consensus on how to move forward. … The resignation did not change the main circumstances in the political scene in Sudan much, especially since the political decision is still in the hands of Burhan.”

Haridi warned, “The situation could climax into armed conflicts and civil war, especially as dozens of civilian protesters were killed.” He argued Hamdok decided to step down since he did not want to become a partner in the killing of protesters.

Musab al-Hadi, Sudanese journalist with Al-Nokhba magazine, confirmed, “The aggravation of crises in Sudan, whether in eastern Sudan or elsewhere, as well as the deterioration of economic conditions, the failure to reach a political consensus on the political agreement, and the killing of protesters on a daily basis prompted Hamdok to quit.”

Meanwhile, coordination offices of the resistance committees in Sudan announced they are working on a new political charter, asserting they made great strides in reaching consensus on some outstanding issues. For their part, the US and the European Union renewed their support for the democratic transition in Khartoum.

Speaking to Al-Monitor, Hadi said, “The Sudanese people, after Hamdok's departure, will not stop calling for a complete civilian rule. It now refuses any representation of the military component as a partner in power. Hamdok's resignation will confuse the military component, especially since it is difficult to find an alternative to Hamdok with the same popularity. The resignation will further strengthen the Sudanese street’s will to rid itself of the military rule and establish full civilian rule.”

Ambassador Salah Halima, deputy chairperson of the Egyptian Council for African Affairs, called for a meaningful dialogue among the various political forces without excluding the military component. “It is not in the interest of Sudan to exclude any faction, as a partnership between the two components is in the best interest of the country,” he told Al-Monitor.

"The Sudanese people should realize that the deteriorating security and political situation in some volatile areas, such as eastern Sudan, South Kordofan and Darfur, prompted Burhan to carry out the military takeover on Oct. 25, 2021,” Halima continued. “Hamdok's resignation could have a dual effect. It could lead to a breakthrough, as it was in compliance with the desire of the forces rejecting the political agreement. But, on the other hand, it may further complicate matters by creating a political vacuum and posing a challenge to the military component to find a popular alternative to Hamdok.”

Halima called for a dialogue that would culminate in an agreement fulfilling the aspirations of most political forces. He said, “Those calling for the departure of the military component can set conditions in the reached agreement preventing the symbols of the military component from running in any upcoming elections. This will guarantee a post-transitional period with no military figures in the rule.  This is the solution to overcoming the impasse.”

In a tweet, US Secretary of State Antony Blinken urged the Sudanese stakeholders to commit to an immediate Sudanese-led, internationally facilitated dialogue. “Security forces must cease using lethal force against demonstrators & commit to an independent investigation,” he said.

Amani al-Tawil, an expert on African affairs at Al-Ahram Center for Political and Strategic Studies, argued Hamdok’s resignation is not in the military’s best interest.

“The military component will now have to face the people and political forces with no support from the civilian component. Hamdok’s departure will also disrupt all international programs dedicated to supporting Sudan economically,” she told Al-Monitor.

Tawil stressed the need to address the crisis for fear of military operations taking over state functions, especially in strife-torn regions such as eastern Sudan and southern Kordofan. “Hamdok committed suicide politically when he returned to his position in November 2021 under the political agreement,” she concluded.