Sudanese Prime Minister Abdalla Hamdok decides to cancel all appointments across governmental positions in the wake of the Oct. 25 incidents. 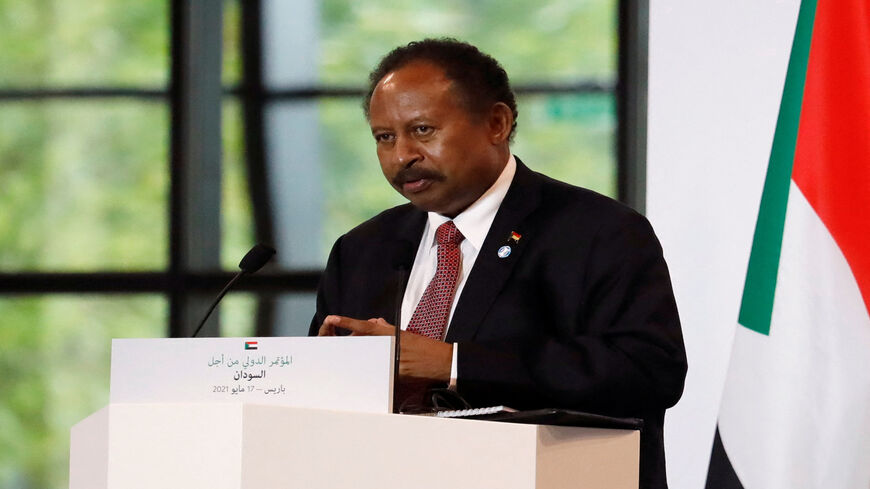 Sudanese Prime Minister Abdalla Hamdok gives a press conference with the French president and the Sudanese prime minister during the International Conference in support of Sudan at the temporary Grand Palais in Paris, France, May 17, 2021. - Sarah Meyssonnier/POOL/AFP via Getty Images

CAIRO — In response to the demands of nearly 16 political parties and components, Sudanese Prime Minister Abdalla Hamdok who regained his position, as per a political agreement concluded between him and Abdel Fattah al-Burhan, issued a decision to stop appointments and dismissals and to review all decisions of dismissal and appointment taken by Burhan following the Oct. 25 events. Hamdok stressed, during his meeting with party representatives, that all decisions taken by Burhan during his detention will be immediately reviewed.

Following the events of Oct. 25, in which Burhan overthrew Hamdok’s government and arrested him along with a number of members of his government, imposed a state of emergency, dissolved the former Sovereignty Council and suspended some provisions of the constitutional document, the current head of the Sovereignty Council moved to relieve the heads of government banks of their positions and appointed others in their place. He also relieved six Sudanese ambassadors, the incumbent Attorney-General Mubarak Mahmoud and seven public prosecutors of their positions. He appointed many new officials, in the Ministries of Foreign Affairs, Information, Justice, the Sudan TV & Radio Corporation and the Press and Publications Council of Sudan, and all companies’ boards of directors were dissolved.

In an exclusive statement to Al-Monitor, Halima called on all political parties in Sudan to stand behind the political agreement, so that the country can move toward ending the transitional phase and achieving the democratic path of transferring power. He emphasized that Sudan is facing many challenges, both internal and external, which requires everyone to stand in one trench to confront these challenges and preserve the unity and stability of Sudan. There are external challenges aimed at undermining the unity of Khartoum, including the border conflict with Ethiopia and the crisis of the Grand Ethiopian Renaissance Dam, and therefore the Sudanese people must agree with the political agreement as a safe haven to preserve the unity and safety of the country.”

During a press conference, UN Secretary-General Antonio Guterres warned the demonstrators opposing the political agreement that questioning this agreement would have serious repercussions on Sudan, saying, “I call for common sense. In Sudan, I understand the reaction of the Sudanese who say we do not want any solution with the army. But for me, the release of Hamdok and his return to his position is an important victory. I appeal to the Sudanese to give precedence to logic and to accept Hamdok and Burhan’s agreement to ensure a peaceful transition of power.”

On the continued outbreak of demonstrations rejecting the political agreement, Halima commented, “Partnership between the two components is a necessity and inevitable and required by the political scene now for the country. It is needed to move toward the democratic path of transferring power. Political parties must prepare themselves for the upcoming elections. It is normal to see opposing political forces in societies aiming to achieve the goals of the revolutions in general. The positive developments that occurred politically with the signing of the political agreement are in line with the goals of the Sudanese revolution.”

According to press statements of the minister of labor and social development in the dissolved transitional government, Tayseer al-Nourani, Burhan dismissed 860 public service workers, including people in leadership positions at embassies, banks and vital state institutions, and replaced them with others belonging to well-known Muslim Brotherhood elements. He stressed that the number of public service workers amounts to 2.5 million people, and the unemployment rate in Sudan exceeds 65%.

The decision as a whole is good and will create more opportunities for justice and transparency in reoffering these jobs to the Sudanese people. The choice will be based on competence, and the decision will reveal the flaws in many vacant jobs, according to Sudanese economist Muhammad al-Nayer.

Hamdok issued a decision assigning new employees to facilitate the tasks of the ministries and to end former appointments of ministry undersecretaries. Hamdok also dismissed the prime minister and the director general of police and his deputy, after reports of police violations against some Sudanese demonstrators.

The government should also issue instructions to banks to finance small projects for small Sudanese enterprises, to provide job opportunities and raise the production process of the state in general. The government must also increase the salaries of public workers in Sudan, especially since their wages do not meet the living needs of citizens.

The Sudanese political analyst, Amr Shaaban, attacked the decision, stressing that it is a failed attempt by Hamdok to absorb the anger of the Sudanese street, which strongly rejects the political agreement, and to legitimize the coup.

He told Al-Monitor, “The decision is worthless, and it does not aim to dismiss the 'fuloul' [remnants] of the Omar al-Bashir regime from the institutions. So far, Hamdok has neither dismissed nor prosecuted any of the remnants of the former regime.”

He said, “Hamdok is not recognized and has been classified as an ally of the military after he had been a symbol of the civil movement in the wake of the events of Oct. 25. When he agreed to sign the political agreement, he was considered a traitor by the Sudanese street, the rebels, the resistance and coordination committees, and the gathering of professionals and political forces."

According to Shaaban, protests are ongoing and will likely continue until the military component is no longer playing a role in the government and the whole political scene. People also want Burhan, Gen. Hamdan Dagalo (Hemedti), Shamseddine Kabbashi, Yasser al-Atta and Ibrahim Jaber to appear before a judicial court. People believe that they committed the massacre on June 3, 2019, and were members of the security committee of Bashir’s regime, which committed many crimes during that massacre.