Protests are sweeping eastern Sudan, which includes three of the country's poorest states. 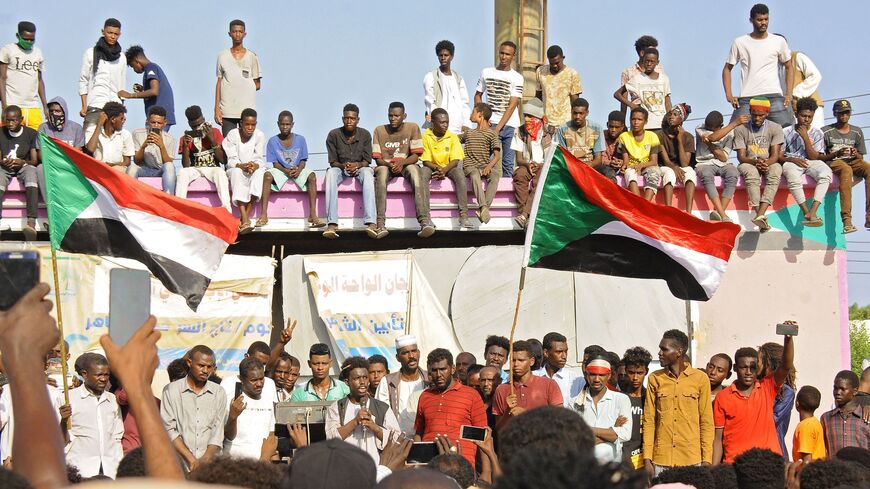 Sudanese protesters take part in a protest in Port Sudan in the east of the country to demand the government's transition to civilian rule, on Oct. 21, 2021. - IBRAHIM ISHAQ/AFP via Getty Images

CAIRO — The Beja tribes have been protesting in eastern Sudan, calling for the dissolution of the government in light of the poor economic conditions in the area and for the abolition of the Juba Peace Agreement.

On Sept. 24, protesters shut down the port in Port Sudan, which is seen as the first commercial outlet in the country. They also blocked the main roads connecting eastern Sudan to the capital Khartoum, a move that has halted imports and exports from and to Sudan since the protests broke out in the beginning of September.

The protests in the east were accompanied by demonstrations in Khartoum this week, where thousands of citizens staged a sit in calling on the military to topple the government. US envoy for the Horn of Africa Jeffrey Feltman arrived in Khartoum today for talks on the situation, which Sudanese Prime Minister Abdalla Hamdok has referred to as the “worst and most dangerous" crisis the country's democratic transition

Salah Halima, an Egyptian former assistant foreign minister, told Al-Monitor that the crisis is eastern Sudan is political and not a security issue.

The majority of the population in eastern Sudan strongly objects to the Juba agreement, which they believe excluded them from power and from benefiting from the region’s resources as eastern Sudan is both rich in agriculture and seen as Sudan’s gateway for imports and exports.

The Beja tribes in eastern Sudan, headed by the tribal Supreme Council of Beja Opticals and Independent Amaudiyas in eastern Sudan, reject the Eastern Path Agreement that outlines the sharing of resources and power under the 2020 Juba Agreement. The Beja people claim the agreement did not meet the expectations and aspirations of the region’s inhabitants and that it was signed by representatives who do not represent eastern Sudan.

Halima said that any solution to the crisis in eastern Sudan must be based on the constitutional charter, with dialogue between the parties to the crisis.

He expressed his deep concern that the ongoing tensions in the east will open the doors to external intervention in Sudanese affairs — something that could threaten the unity of Sudanese territories, especially with calls in eastern Sudan for autonomy and self-determination.

“There are two parties that can play a pivotal role in addressing the crisis: Cairo and Juba. Both capitals maintain strong relations with Sudan and have already played a major role in the Juba Peace Agreement. Egypt and South Sudan believe that stability in Khartoum is necessary for their national security,” Halima added.

Meanwhile, the Beja tribes set conditions for suspending the protests and reopening the roads and port: the dismissal of the transitional government and the abolition of the Eastern Path Agreement.

In a video message to the public recorded Oct. 11, rapporteur Abdullah Obshar said the Beja council will not back down on its conditions to end the protests.

Mohamed al-Nayer, who writes on economic issues for several local and foreign newspapers, told Al-Monitor that eastern Sudan is of strategic importance to the country, given its geographical location.

“Sudan’s territories stretch over 750 kilometers on the Red Sea coast, located in the east of the country. This means that the eastern region has great access to the Red Sea — a location that is seen as one of the most important waterways in the global trade movement,” Nayer explained.

“The eastern region is not only central for Khartoum but for other Sudanese states as it represents a commercial passage for several neighboring countries that do not have seaports such as South Sudan, Chad and Central Africa, all of which depend on Sudanese ports,” he said.

Nayer continued, “The transitional government should have taken the initiative to solve the crisis from the very beginning instead of stalling. The continuation of the crisis in eastern Sudan may further complicate the country’s political, security and economic scene.”

He noted, “Khartoum’s trade exchange through the eastern region amounts to $11 billion annually. The Sudanese Finance Ministry depends on seaports’ revenues as one of the most important sources of national income for the general budget. Therefore, it is surprising to see the government stalling in addressing the crisis there.”

Commenting on talks about using alternative ports, Nayer said, “No alternative ports will be as efficient as east Sudan’s seaports, which don’t only serve Khartoum but also neighboring landlocked countries.”

He stressed that the transitional government made a grave mistake by appointing a regional governor in Darfur and not for the rest of Sudan.

“The current government has also been preoccupied with major issues, overlooking the need to provide a decent life for citizens. This government must be dissolved and replaced by a technocratic government with no affiliations to any political parties, whose mission would be to provide a decent life for the Sudanese people, paving the way for free and fair elections and transiting the country toward a democratic rule,” he added.

In televised statements on Oct. 15, Prime Minister Hamdok announced that an international conference would be held soon to address the crisis in eastern Sudan.

He added that economic and social support is necessary for the eastern region, stressing that eastern Sudan has been marginalized for decades.

Gen. Abdel Fattah Abdelrahman al-Burhan, chairman of the Sovereignty Council of Sudan, called on Hamdok to dissolve the transitional government and form a new one.

But Hamdok rejected this request, and hundreds of Sudanese protested on Oct. 17 in front of the presidential palace demanding the dissolution of the government.

In a press statement on Oct. 11, the National Chamber of Importers in Sudan announced the closure of the eastern region has cost $65 million per day.

The chamber’s head, Shehab al-Din al-Tayeb, warned of more huge losses due to damage to exported and imported goods, some of which are expired. He added that there are around 3,000 trucks completely stopped on the national highway, causing losses up to $2 million per day.