In a joyful atmosphere and with regional and international participation, the Juba peace agreement was finally signed between Sudan and a number of armed factions at Freedom Square in Juba, the capital of South Sudan. 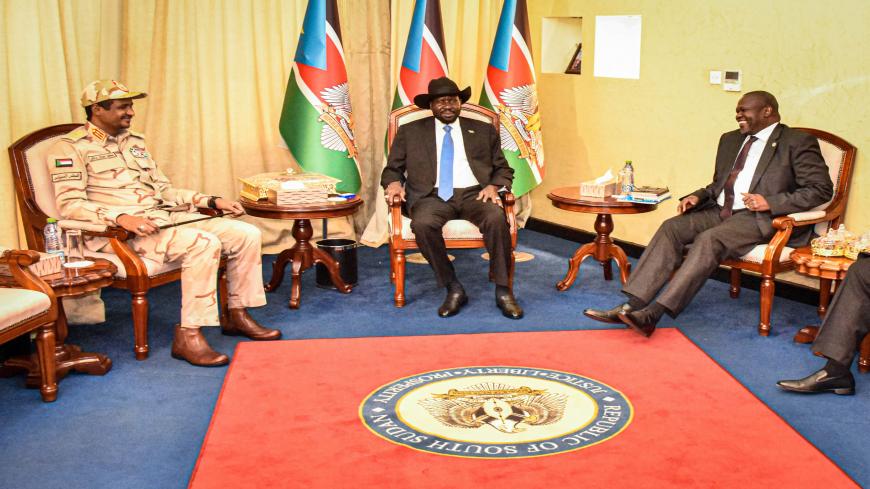 CAIRO — The Sudanese government and several armed groups signed the Juba peace agreement Oct. 3. The agreement had been postponed several times, but the signing ceremony was finally held at Freedom Square in Juba, the capital of neighboring South Sudan, in a joyful atmosphere and in the presence of regional and international figures including the presidents of Somalia, Chad and Djibouti, along with the prime ministers of Egypt and Ethiopia, the US envoy to North Sudan and South Sudan, and representatives from several other countries.

The Juba Agreement includes eight principles related to issues of land ownership, the system in Sudan being divided into districts instead of states, transitional justice and compensation, the development of the nomadic and pastoral sector, the sharing of wealth, and the development of the Darfur district and other marginalized ones in order to join other districts that have experienced development and power-sharing, in addition to the return of refugees and displaced persons to their homes. At the security level, the agreement underlined the need to integrate the fighters of the armed movements and factions that signed the agreement into Sudan’s national army.

The agreement was signed by Sudan’s transitional authority and a number of armed factions, namely the Sudanese Revolutionary Front, which includes five armed factions and four political movements.

Despite this, the agreement is set to mark the end of a dark history of wars and internal conflicts in Sudan that left hundreds dead and wounded, and resulted in the displacement of millions in Darfur, Blue Nile and South Kordofan.

The conflict in the Darfur region, which broke out in 2003, has claimed the lives of more than 300,000 people and displaced nearly 2.5 million people, according to United Nations data. People in Darfur had been demanding development in their area where they suffered for years from marginalization and ethnic discrimination, before the situation turned into an all-out war.

Noteworthy is that the Juba Agreement calls for achieving peace between Sudan and a number of armed factions, but does not mention South Sudan.

The Sudanese people hope the agreement could succeed in ending the fight and establishing the principles of peace and coexistence among all Sudanese factions, which was evident in the hundreds of citizens welcoming the agreement.

Mohammed al-Shazly, former Egyptian ambassador to Khartoum, told Al-Monitor that the Juba peace agreement is an important step on the right path to building the state of Sudan and unifying ranks. He stressed that Khartoum is in dire need of stability in order to achieve comprehensive development, especially since Khartoum faces several challenges at all levels, the most important of which is the armed conflict between the rebel factions in several districts in Sudan. This is in addition to the fact that the sanctions imposed on Sudan continue to impede development efforts, which, according to Shazly, requires all parties to reject violence and adhere to this agreement firmly in order to unify ranks.

In August 1993, the US State Department issued a decision to add Sudan to its list of state sponsors of terrorism. Former US President Bill Clinton issued Nov. 13, 1997, an executive order under which economic and trade sanctions were applied to Sudan. A large part of these sanctions remain in force until this day.

Shazly explained that the peace agreement will have many political and economic positive aspects, noting that the terms of the agreement were natural and logical, namely achieving the principles of peace and social justice, as well as integrating armed fighters within Khartoum’s national army.

However, he expressed concerns about the agreement still lacking certain factors since some factions and armed groups, such as the Sudanese Liberation Movement, are yet to sign.

Shazly pointed out that choosing Juba to sign the agreement has a great significance that lies in South Sudan's keenness to achieve peace in North Sudan, and to emphasize the strength and depth of relations between the two states, stressing that South Sudan and North Sudan possess huge natural resources, which requires everyone to overcome their differences and work together to achieve comprehensive development.

Ayman Shabana, professor of political science and director of the African Research Center at Cairo University, told Al-Monitor that the transitional government that is now ruling Sudan represents a strong opportunity to achieve peace throughout the country, especially since most of the armed factions have strongly contributed to overthrowing Omar al-Bashir’s regime, by gathering under the banner of the Forces of Freedom and Change alliance.

He stressed that these groups have a firm belief that the Bashir regime was an obstacle to achieving peace, and with its ousting those factions have previously declared that they are not in conflict with the Sudanese people and that they do not have any separatist intentions, but their issue is with the marginalization and isolation that some of them endured.

Shabana added that the decadeslong conflicts and wars in Sudan have made all parties fully convinced that military solutions are not the way to solve the crises that Sudan is experiencing, which is why the Juba Agreement seemed like a safe way to bring about peace and development, by achieving social justice and renouncing armed violence.

Shabana noted that having strong international support would further help the agreement achieve peace among all Sudanese factions.