The head of the Sudanese Sovereign Council, Lt. Gen. Abdel Fattah al-Burhan, and the leader of the Sudan People’s Liberation Movement-North, Abdelaziz al-Hilu, signed the Declaration of Principles agreement, paving the way for peace in Sudan. 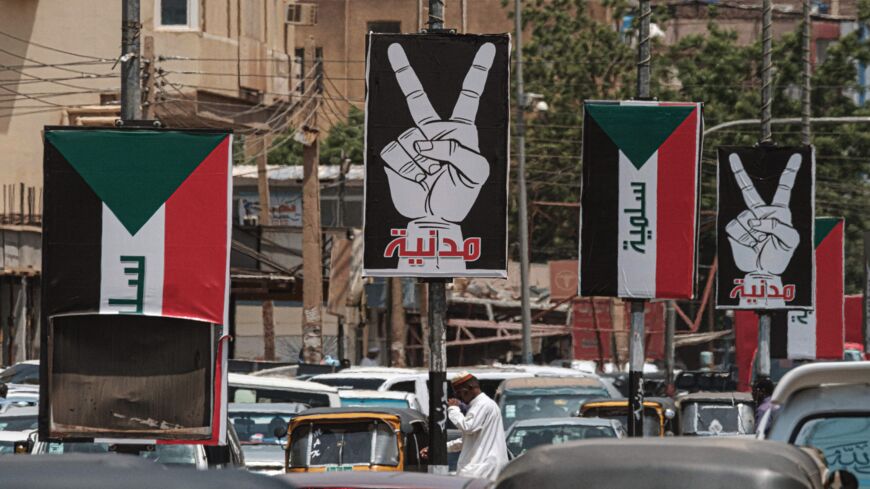 This picture taken on June 15, 2019, shows placards showing the victory gesture with the Arabic word "civilian" and others of the Sudanese flag with the word "peaceful" along a street in the Sudanese capital, Khartoum. - YASUYOSHI CHIBA/AFP via Getty Images

Analysts described this agreement as a historical and powerful step on the road to stability in Sudan, turning the page of war forever and moving forward on the path to peace, particularly since the agreement included several provisions, most notably the separation of religion and state.

The SPLM-N is popular in the Blue Nile and South Kordofan provinces. The movement was engaged in armed confrontations with the Omar al-Bashir regime from the 1980s until he was ousted in April 2019 as a result of the violence committed by the Bashir regime against its non-Muslim population. Meanwhile, Bashir had failed to storm the movement's headquarters in the town of Kauda on several occasions, since the movement was always a step ahead with its abundant weapons and military equipment.

Mohamed El-Shazly, former Egyptian ambassador to Khartoum, told Al-Monitor that the Declaration of Principles agreement is a serious step on the road to building a state governed by the Sudanese Constitution and law, specifically since the agreement included the separation of religion and state. He stressed that this separation would increase the unity and stability of the State of Sudan, particularly since the SPLM-N was the one that led the war and the struggle for the secession of South Sudan, and thus its involvement under the umbrella of the Sudanese state will allow for a large military force to join the Sudanese army in the future.

The Declaration of Principles agreement received broad acclaim among most of the forces participating in the revolution that toppled the Bashir regime in 2019, namely the Sudanese Professionals Association, the Sudanese Congress Party, the National Umma Party and the Sudan Revolutionary Front. In separate statements, these parties described the agreement as a major step toward a comprehensive peace in the country, especially since the agreement did not include the right to self-determination, which calms the Sudanese’s fears of a new secession scenario similar to the secession of South Sudan in 2011.

Shazly said this agreement will not only support the stability of Sudan at home, but its influence will also extend to Sudan's relationship with neighboring countries by raising the slogan of respecting all religions and separating religion from state. He stressed that building a state governed by the constitution and not imposing a specific religion will improve Sudan's ties with its neighboring countries, particularly since most of these countries are inhabited by non-Muslim residents.

The agreement called for the establishment of a civil, democratic state in Sudan that guarantees freedom of religion for all the Sudanese people by separating cultural, ethnic and religious identities from the state.

The state shall not adopt an official religion nor will it impose any on anyone, the agreement read, adding that the state shall be impartial with regard to religious and belief affairs as well as it shall guarantee and protect freedom of religion and religious practices, provided that these principles are guaranteed in the constitution.

Hani Raslan, an expert on African affairs at Al-Ahram Center for Political and Strategic Studies, told Al-Monitor that signing the Declaration of Principles agreement represents a major turning point in the history of Sudan, especially since it was initially signed by Sudan’s Prime Minister Abdalla Hamdok, who failed to get the Sovereign Council to approve it back in September 2020. This is why, he explained, the fact that the council itself signed on the agreement in March is a guarantee that it will be implemented.

He stressed that the Declaration of Principles will solve many of the problems and crises that caused the outbreak of civil wars in the south, which led to the secession of South Sudan.

Raslan added, “There are some political forces loyal to the Bashir regime that are working to use these issues to find a place for Islamists in the political scene once again, and to obstruct the peace and development paths that the Sovereign Council seeks, especially since Sudan is no longer included on the list of terrorism, which will accelerate the development process in Sudan. We hope that the Declaration of Principles will be translated into a peace agreement that carries a new start for Khartoum toward peace and comprehensive development.”

The agreement also stipulated that personal status laws should not be based on religion, custom and beliefs, in a manner that does not conflict with basic rights, and that Sudan shall have a single professional national army operating according to a new unified military doctrine, and that its loyalty would only be to the country, not to a party or group.

On March 29, Omar al-Dukair, head of the Sudanese Congress Party, told Sky News Arabia he was happy with the agreement concluded between Burhan and Hilu, stressing that the Declaration of Principles will help build a state of democracy and citizenship for all, and will replace the language of weapons and violence with the language of dialogue and debate. He called on all parties to work to mobilize efforts and complete the peace process as soon as possible in order to devote time for reform.

Sudanese journalist Musab al-Hadi told Al-Monitor, “Introducing secularism as a reality in the life of the Sudanese people will be a new experience in the history of the Sudanese state, especially that since the colonization of Sudan ended, the political elites have not been on a permanent agreement. Although separating religion and state can contribute to the country’s stability, I do not believe it will completely end the long conflict of war, since it is a deep-rooted, ideological conflict.”

Hadi added, “If we carefully examine the records of the modern history of Sudan, religion was not in isolation from the life and legislation of the Sudanese, so the Declaration of Principles agreement may reduce the tension, but in no case will the agreement put a permanent end to the conflicts.”

The Declaration of Principles also stipulated that the process of integrating and unifying forces be gradual, and it must be completed by the end of the transitional period. Meanwhile, the round of direct talks between the Sudanese government and the SPLM-N will start on April 20 in South Sudan.