Why Egypt is now getting involved in South Sudan

Egypt oversaw the successful signing of a deal to unify the Sudan People's Liberation Movement after it achieved similar foreign policy successes in neighboring countries such as Palestine and Libya. 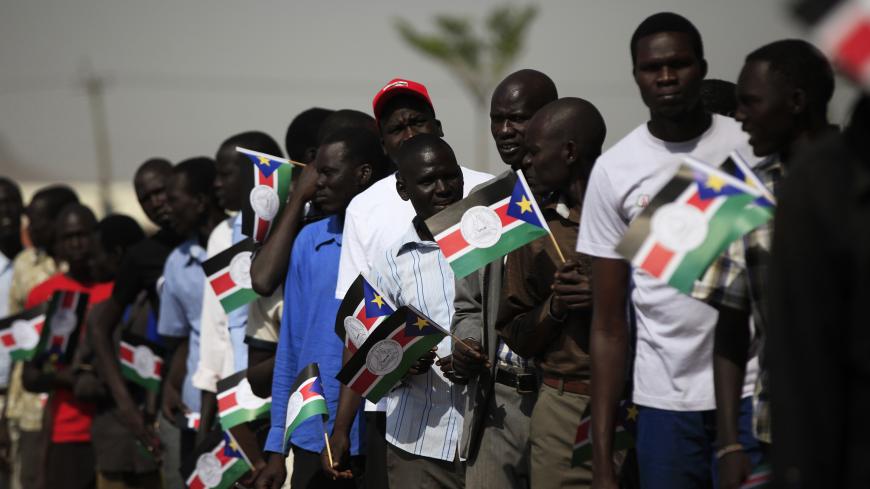 Men wait in line to get inside a hall during a rally for the Sudan People's Liberation Movement youth in Juba, South Sudan, Feb. 15, 2014. - REUTERS/Andreea Campeanu

CAIRO — On Nov. 16, after four consecutive meetings with all concerned parties, the Cairo "Declaration of Unification" of Sudan People's Liberation Movement (SPLM) was signed at the headquarters of the Egyptian General Intelligence under the auspices of Egyptian President Abdel Fattah al-Sisi and President of Uganda Yoweri Museveni. The parties agreed that the General Intelligence would follow up on the implementation of the items included in the agreement, without disclosing more details.

Following the signing, the Egyptian state agency said in a statement that the document will allow for the return of Sudanese refugees to their countries and internally displaced persons to their areas of origin under the supervision of the Egyptian intelligence.

Observers described the agreement as a successful move to heal the rift and end the ongoing South Sudanese conflict. But it raises many questions, especially since Cairo was not involved in the past in the unification of the SPLM to put an end to the conflict that has been ongoing since the South Sudanese Civil War erupted in December 2013 between the government forces of South Sudanese President Salva Kiir Mayardit and supporters of his former first deputy, Riek Machar. Thousands of civilians have been killed and millions have fled to neighboring countries.

According to the United Nations High Commissioner for Refugees, about 1,800 refugees from South Sudan arrived daily in Uganda in the past year, and they now account for 1 million people. There are another 1 million South Sudanese refugees spread in Sudan, Ethiopia, Kenya, the Democratic Republic of Congo and the Central African Republic.

The SPLM was established in 1983 when then-Sudanese President Jaafar Nimeiri deployed a military force led by John Garang from the Dinka tribe to stop the military uprising led by some 500 soldiers in South Sudan. However, Garang joined the rebels and created the SPLM, saying his move aimed at ending the control of the Khartoum central government, not achieving independence from Sudan. The war continued until 2005, when the Comprehensive Peace Agreement was signed. As per the agreement, Garang was named first vice president of Sudan. However, a dispute over the nature of relations with Khartoum emerged between Garang and his deputy Mayardit. When Garang was killed in a helicopter crash, Mayardit replaced him and named Machar as first deputy.

In 2011, South Sudan gained independence from Khartoum, and two years later, on Dec. 15, 2013, a civil war erupted in South Sudan between Mayardit and his supporters from the Dinka tribe, and Machar and his followers from the Nuer tribe. The war ended on Aug. 17, 2015, with the signing of a peace agreement calling for the return of Machar to his position as first deputy to Mayardit.

In July 2016, Mayardit dismissed Machar following armed clashes between their supporters in Juba, the South Sudan capital. Sporadic confrontations are still ongoing between the two parties.

In his article published in the Egyptian newspaper Al-Shorouk on Nov. 21, South Sudanese author Deng Aling said that Egypt’s interest in unifying the movement, especially at this time, mainly aims at limiting the role of Sudan, Ethiopia and Israel in South Sudan. He said, “The foreign policy of the government of Juba is not yet understood, but the relations with neighboring Ethiopia are improving on one hand and deteriorating [on the other]. The same applies to the relations with Sudan. As for Israel, it wants to step in in South Sudan for several reasons.”

Israel was one of the first countries to support the separatist movement in South Sudan. Israel considers South Sudan an important foothold to gain in Africa, in addition to benefiting from oil and the Nile waters. Israel signed the first joint international agreement with South Sudan for cooperation in the oil and Nile water areas on July 31, 2012.

Aling added, “That is why Egypt decided to interfere and to find a solution to the issue through the reunification of the SPLM, which will eventually enable [Egypt] to be fully present in the south if the unity is to be achieved and the conflict to be resolved. This [move] would also allow [Egypt] to decrease, even if only slightly, the roles of Sudan, Ethiopia and Israel in the south, thus securing the White Nile from any attempts to use its water."

The signing of the Declaration of Unification comes at the same time as the stalled negotiations on the Ethiopian Renaissance Dam between Egypt, Ethiopia and Sudan. Egyptian Minister of Water Resources and Irrigation Mohamed Abdel Ati said in a statement Nov. 12 that there is a difference of views between the three countries, in spite of Egypt's approval of the initial report submitted by French consultancy firm BRL before completing the technical study on the effects of the Renaissance Dam on Egypt and Sudan. Ati did not specify the nature of disputes.

The radical change in Egyptian foreign policy was not limited to the African continent, as Cairo succeeded in concluding agreements in neighboring Arab countries.

In Palestine, Egypt achieved reconciliation between Fatah and Hamas on Oct. 12, in the presence of Egyptian intelligence Chief Khaled Fawzy, after a 10-year division following Hamas’ takeover of the Gaza Strip in 2007.

Meanwhile, Cairo is seeking to unify the Libyan army under the command of Gen. Khalifa Hifter. Three meetings were held in Cairo between military personnel from various Libyan areas. The latest such meeting was held Oct. 30, in the presence of officers from the Libyan city of Misrata and officials from the western and eastern areas. The meeting aimed at unifying the military institution in Libya and forming a unified military council that includes all members of the armed forces, away from politics, under the sponsorship of Mahmoud Ibrahim Hegazi, the chief of staff of the Egyptian Armed Forces.

Egyptian army spokesman Tamer Rifai announced on Nov. 2 the formation of a group of specialized technical committees to look into mechanisms for unifying the Libyan military and ways to achieve this.

Hassan Nafea, a professor of political science at Cairo University, told Al-Monitor that Egypt's foreign policy changed radically in the wake of the events of June 30, 2013, that ousted the Muslim Brotherhood regime. Egypt is now focusing on confronting the group and other radical movements in other countries for fear of the return of the Muslim Brotherhood.

Nafea added, “This is reflected in Egypt’s policy, whether in Palestine, in Libya or even in Syria. The Egyptian political system always seeks to strengthen the ruling regimes in Syria and Libya for fear of the rise of Islamic movements and their control over the government. A case in point is the huge Egyptian support to [Hifter]. In Palestine, Egypt succeeded in completing the reconciliation between Fatah and Hamas, one of the branches of the Muslim Brotherhood, to prevent the infiltration of extremist elements through Hamas into the Sinai Peninsula.”

Nafea noted that Egypt’s policy also changed in Africa after the former Egyptian regimes distanced Egypt from the African continent. Egypt seeks to become a main actor in the internal scene of South Sudan in order to have pressure cards against Sudan. Such pressure would serve Egypt’s interests, especially since Sudan has been pressuring Cairo to give up the Halayeb area or refer to international arbitration, which Egypt completely rejects.

Nafea concluded, "Unfortunately, the current Egyptian regime is not aware that it has succeeded in exhausting the Muslim Brotherhood and other extremist movements, The regime still fears these movements and the [threats they pose] on its survival.”