Egypt is implementing several water development projects in South Sudan as the negotiations with Ethiopia over the Renaissance Dam have yet to yield tangible results. 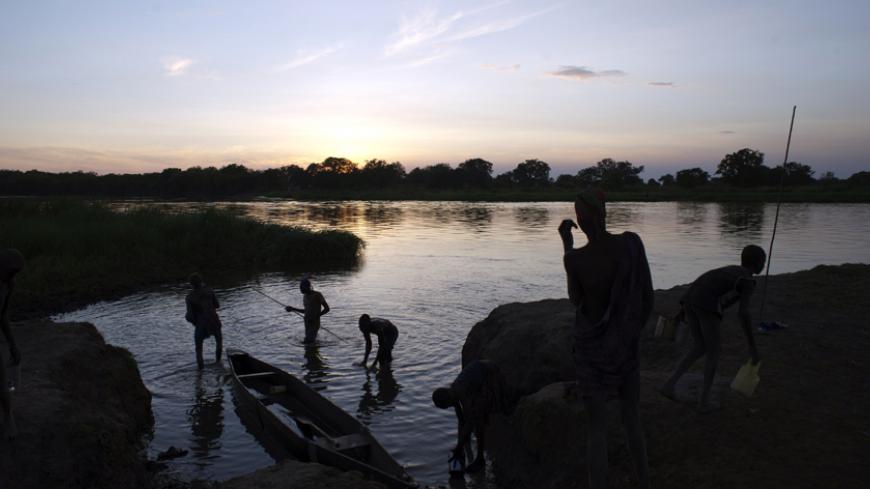 This picture shows Mundari youth fishing with a spear along the Nile River, near Terekeka in South Sudan, April 13, 2014. - ALI NGETHI/AFP/Getty Images

After negotiations between Egypt, Ethiopia and Sudan over Ethiopia’s Renaissance Dam failed to reach a clear agreement to reduce the potential negative effects on Egyptian water security, Cairo opted for strong political and technical moves to earn the trust of South Sudan. In addition to providing the new state with further support, Egypt hopes to secure its interests in the Nile's water, which comes from the equatorial lakes and passes through South Sudan’s territory.

Egypt had received the head of state of South Sudan, Salva Kiir Mayardit, on Nov. 20, in his first visit to Cairo, during which a number of cooperation agreements were signed. Chief among these are the deals for the joint management of the Nile water between Cairo and Juba.

The agreement between Cairo and Juba on water management includes articles setting rules and mechanisms for cooperation between the two parties. The agreement provides for the establishment of an Egyptian-South Sudanese joint body tasked with the management of the Nile water. It also stipulates the dispatching of a permanent Egyptian irrigation mission to South Sudan, the setting of standards for the Nile water levels in South Sudan and the development of a mechanism to manage the waste water from Bahr el-Ghazal and facilitate the river's flow and stop its squandering.

Egyptian Minister of Water Resources and Irrigation Hossam Maghazi told Al-Monitor, “The new cooperation agreement offers benefits and interests to both parties, as it is the first time a legal agreement has been signed to manage the Nile water issue between Cairo and Juba.” He explained, “Our primary goal is to develop water resources in the South Sudan state and develop a joint cooperation strategy that would preserve the historic right of Egypt and the development right of the Nile population,” adding, “We are well aware that the cooperation relations with South Sudan are of a special importance an nature.”

Maghazi has traveled to Juba twice since the signing of the agreement in Cairo — in December 2014 and in February 2015 — to enact the agreement as soon as possible, follow up on the implementation of the items agreed upon and dispatch the Egyptian irrigation mission to South Sudan.

Egypt had offered a nonrefundable grant to South Sudan during its secession from Sudan in 2009. The grant, valued at $26 million, was intended to support projects to develop the water resources in the south and establish rainwater storage wells and dams, securing safe water sources to the citizens of the south.

Ahmed Bahaa, the head of the Nile water sector in the Egyptian Ministry of Water, told Al-Monitor, “Half of the Egyptian grant has been used, and there are still projects underway to harvest rainwater and offer technical training and support.”

The most important issue that Egypt is expecting to negotiate with South Sudan is the resumption of the Jonglei Canal Project, which was halted as result of the North-South Sudanese civil war in 1983 after 70% of its excavation work was completed. However, officials in South Sudan have repeatedly stressed that their country has no intention of entering into negotiations about the project in light of the currently unstable political conditions and the popular rejection of the project.

An Egyptian diplomatic source told Al-Monitor on condition of anonymity, “Cairo still has a strong intention to restore the Jonglei project, which will be the best solution to increase Egypt's share of the Nile water in light of the concerns over the direct effects of the Renaissance Dam on the water flowing from east of the Nile to the High Dam lake.”

The source explained, “There are statistics and technical studies that confirm that South Sudan is the strongest alternative to increase the Nile capacity,” but stressed, “There is still a long way to adapt these studies both politically and diplomatically and ensure tangible results that would serve the interests of Egypt's water.”

Despite Cairo trying to take parallel roads to secure its share while continuing to negotiate with Ethiopia to reduce the potential risk of the Renaissance Dam — which is under construction — on the course of the Blue Nile, technical experts emphasized that such steps may be a waste of time. These experts called for political action to place pressure on Ethiopia to make real guarantees that the construction of the dam would not adversely affect Egypt.

Mohamed Nasreddin Allam, former Egyptian water minister and now a professor of water resources at Cairo University, told Al-Monitor, “South Sudan cannot replace Ethiopia in securing Egypt’s annual share of the Nile water, especially considering that Egypt only gets 15% of its water share from the White Nile — which passes through the territory of South Sudan — while the largest percentage comes from the Ethiopian Plateau.”

Allam added, “There is still a long way to go before we feel the results of cooperation with South Sudan, while all of the Egyptian actions are just long-term solutions aimed at avoiding the problems that would result from the Ethiopian dams.”

Considering the Ethiopian tendency to expand dam construction on the Nile for development considerations and the rest of the Nile headwaters countries’ political rejection of Egypt’s "absolute rights" in the Nile waters, Egypt is open to any possible solution in dealing with the Nile issue and securing its annual water share, estimated at 55.5 billion cubic meters, set by the 1959 agreement signed with Sudan.