Rebel leaders who integrated into the transitional bodies through the civilian side after the 2020 Juba Peace Agreements have allied with the military, but some defiance remains. 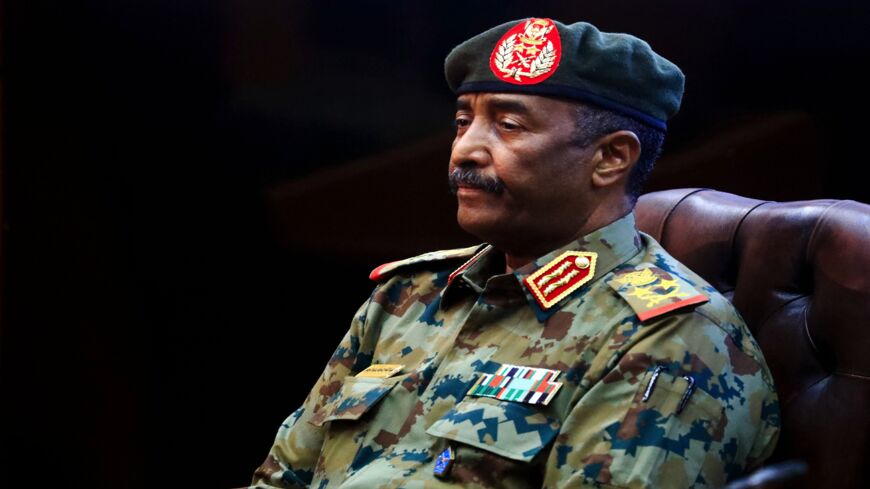 Flanked by two national flags and dressed in military uniform, Gen. Abdel Fattah al-Burhan, leader of the military coup in Sudan last month, presided on Nov. 14 in Khartoum over the first session of the country’s new Sovereign Council, a contested body he had appointed three days earlier that acts as a disputed and temporary head of state.

Gathered around him were all the other members of the council, which notably excludes any representative of the Forces for Freedom and Change (FFC), the wide political alliance that had shared power with the military before the takeover. Among those who did return to the table, however, were commander of the paramilitary Rapid Support Forces (RSF) Gen. Mohamed Hamdan Dagalo, as well as El Hadi Idris, Malik Agar and Taher Hajar of the Sudanese Revolutionary Front (SRF), an umbrella of former rebel groups.

The composition of the council’s meeting table was the final testament to the sides that Sudan’s different rebel groups have taken on the putsch, and the confirmation that rebel leaders who were integrated into the transitional bodies through its civilian side following the 2020 Juba Peace Agreements have decided to place their bets on allying with the military. Still, the opposition of Sudan’s two most powerful rebel groups, whose activity was hard to justify amidst a transition, also means there exists some armed resistance to the coup.

“The division amongst armed groups vis-a-vis the coup mainly comes from their foundational ground and in fact is more or less consistent with their behavior since the beginning of the revolution in December 2018,” civil society activist Hamid Khalafallah noted. “There are different degrees around how committed these are to the cause they fought for and to the communities they claim to represent,” he told Al-Monitor.

Before the coup and especially in the wake of a shady coup attempt aborted in September, there had already been moves on the military side leading the transition that threatened to derail the process. In the face of the growing tension with its civilian wing, Burhan and Dagalo appeared to close ranks, at least as for narrative and staging, and were accused by civilians of trying to sow discord among their ranks and create instability.

Ready to play along, a faction close to the military but within the FFC splintered off and formed its own Charter of National Accord in early October while promoting protests openly calling for a military coup. Among them were another two rebel groups, the Justice and Equality Movement (JEM) led by still-Finance Minister Jibril Ibrahim, and the Sudan Liberation Movement (SLM-Minawi) led by Darfur Gov. Minni Minawi.

Right before the coup, these same two groups deployed some of their forces from Darfur to Khartoum, according to the African Center for Justice and Peace Studies. The JEM withdrew some of its forces to Sudan’s capital before Oct. 19, and the SLM-Minawi did so a few hours before the putsch.

The JEM, the SLM-Minawi and the SRF were all signatories of the Juba Peace Agreement in August 2020, despite the fact that none of them had challenged the central government in years. Some analysts already warned back then that the deal weakened the civilian wing of the government and opened the door to the possibility of rebel groups allying with Dagalo and the military and dealing a blow to prospects of democracy and civilian rule.

“The majority of the signatories of the [Juba Peace Agreements] have come out at different phases supporting and throwing their weight behind Burhan and his coup,” Raga Makawi, Debating Ideas editor at African Arguments, told Al-Monitor. “The [Juba Peace Agreements were] an agreement of the rebel groups defeated in the field anyway and for whom joining the government on these terms provided an improved step up to accessing wealth and power,” she added.

“The Juba Peace Agreement was at the end of the day negotiated by the military, [and] some of the FFC partners were opposed to the Juba deal. [They] would probably see themselves today as justified in their position, given the realignment in Khartoum,” said Magdi El Gizouli, an academic and fellow of the Rift Valley Institute.

Despite the unity they have publicly displayed, analysts note that the group comprising Sudan’s armed forces, the RSF and allied rebel groups are far from solid and cohesive. On the contrary, observers argue the group is more of a fragile marriage of convenience derived from a number of common interests, which makes it vulnerable to squabbles.

“It is actually a marriage of convenience that would not last long even if the coup succeeds,” Khalafallah said. “They are all aware of these dynamics but decided to defer their intra-battles to a later stage. Their survival tactic is the enemy of my enemy is my friend, but that’s short-sighted when this friend is also your enemy at some level.”

“The JEM and the SLM-Minawi and some of the SRF fractions have always been more inclined to accepting positions for their leaders as a solution to end the conflict,” he added. “But even within the JEM there are different opinions, and I wouldn’t be surprised if the behavior of their leaders causes serious frictions within the movement.”

The relationship between the armed forces and the RSF over the past two years has been particularly tense, in part due to the reported reluctance that Dagalo’s high profile generates within the elite officer class, the pressure over whether the two groups should merge and the better conditions of the paramilitary group’s members. “I attended a webinar of former retired officers who were dismissed during the [Omar al-] Bashir regime and who still have contacts with some of their colleagues in the armed forces. They voiced their disappointment about the situation of the armed forces and the role of the RSF,” Jihad Mashamoun, a researcher and an analyst on Sudanese affairs, told Al-Monitor.

Still, the cost of dissolving this frail coalition could also be high. “A fracture would imply a return to warfare somewhere,” Gizouli said. “Agar, for instance, argued that opposing Burhan would mean he would be forced to return to the Blue Nile with the mission of resuming warfare, a prospect he feels would be too taxing now. Agar and others argue that the struggle over democracy in Khartoum does not really concern them or answer to the demands and problems of their rural constituencies,” he added.

In front of them, the military coup has been resolutely condemned and contested by Sudan’s well-established civil society and by the country’s two main rebel groups: the Sudan Liberation Movement of Abdelwahid El Nur (SLM-Nur), which controls parts of Jebel Marra, in Darfur, and the Sudan People’s Liberation Movement-North of Abdelaziz al-Hilu, which controls parts of southern Kordofan and the Blue Nile. Neither of them signed the Juba Peace Agreement, and both have voiced their opposition to the takeover.

To what extent these two groups pose a challenge to the coup leaders, however, remains to be seen. “Hilu is almost the only one that still has an organized army on the ground and has full control over some parts of the country. The whole peace process — what’s already signed and what’s still in the making — is currently at stake, and the coup could compromise all the cease-fire arrangements,” Khalafallah said.

“It is actually Hilu and [Nur's] forces that hold the largest fighting forces and which, over the decades, managed to provide a real challenge to [the deposed dictator] Bashir and to his military governance,” Makawi noted.

Gizouli said, “The SLM-Nur has long expired as a military force, [and] Hilu is another story. But so far he has remained effectively silent and is probably waiting to see how the power struggle in Khartoum would eventually play out, effectively the posture he assumed from the beginning of the 2018-2019 revolution.”