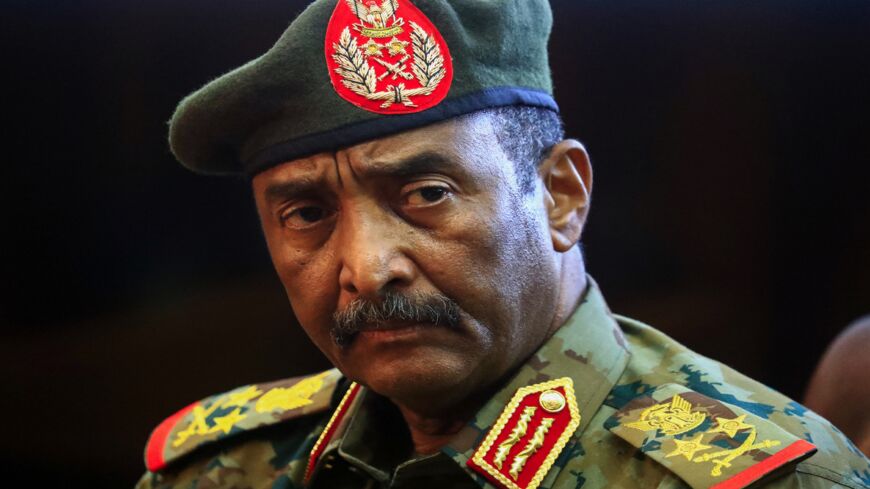 Sudan's top army general, Abdel Fattah al-Burhan, speaks during a press conference at the General Command of the Armed Forces in Khartoum on Oct. 26, 2021. Angry Sudanese stood their ground in street protests against a coup, as international condemnation of the military's takeover poured in ahead of a UN Security Council meeting. - ASHRAF SHAZLY/AFP via Getty Images

The leader of a military coup that overthrew Sudan’s civilian-led government on Oct. 25 dismissed several Sudanese ambassadors abroad after they publicly vowed to resist his takeover.

Sudan’s ambassadors to the United States, the European Union, the United Nations mission in Geneva, France, China and Qatar were all fired, Sudanese state television reported, a day after the envoys and others signed a public letter pledging loyalty to the deposed civilian-led government.

The ambassadors “condemned in the strongest terms the brutal military coup,” which their letter said violated Sudan’s 2019 pro-democracy revolution.

Their letter further stated that the envoys support the Sudanese peoples’ “heroic resistance” against the coup led by Lt. Gen. Abdel Fattah al-Burhan.

Scattered protests have formed in Khartoum and other cities this week in response to the coup. Much larger protests are expected on Saturday, as the international community urges calm.

Sudan’s Ambassador to the United States Nureldin Satti, a respected scholar and seasoned diplomat with years of experience representing Sudan in the West, was among those dismissed by Burhan’s junta.

The Biden administration swiftly condemned the forced takeover on Monday and urged Burhan to release the country’s civilian leaders, including Prime Minister Abdalla Hamdok. Hamdok was released and received visits from a number of Western diplomats from Europe, the UN and the United States.

Washington also froze a massive $700 million package of financial aid set aside to foster Sudan’s economic recovery after three decades of isolation and corrupt mismanagement under the previous dictatorship of Omar al-Bashir, who was ousted by the military amid popular protests last year.

The World Bank on Wednesday also halted its vital aid stream to heavily indebted Sudan, where inflation has continued to rise, worsening living conditions for millions of people. Workers at the central bank in Khartoum reportedly stopped working this week in protest of the coup, further risking a decline of the country’s feeble economy.

While the direct effects of the international aid freezes have yet to manifest, they are likely to be intense.

The United States has yet to impose direct economic sanctions on the junta, the effectiveness of which may prove limited. Sudan’s regime endured decades of US sanctions, having only been removed from Washington’s terror-sponsors blacklist last year.

Instead, Washington is leaning on its allies and partners around the world to condemn the coup and pressure Burhan to reverse course.

Secretary of State Antony Blinken spoke directly with Sudanese Foreign Minister Mariam al-Mahdi to “solicit her views about what steps the United States can take to support the Sudanese people in their call for a civilian-led transition to democracy,” according to a US statement.

Some of Sudan’s most powerful neighbors, including Egypt, Saudi Arabia and Israel, have remained relatively quiet on the takeover, however, raising concerns that those influential states – all allied with the United States – may be less opposed to Sudan’s new de facto system of rule.

The United Nations Security Council failed on Wednesday to pass a joint statement condemning the coup. Russia’s representatives opposed the move. Moscow’s deputy UN envoy Dmitry Polyanskiy said that violence should cease, the United States should not suspend its aid and it was up to the Sudanese to decide whether the takeover constituted a coup, according to state-run Russian media.

Russia, like the United States, has shown signs of strategic interest in Sudan’s transition. An agreement for Russia to establish a naval base at Port Sudan, originally signed with Bashir's government, has been reworked and placed on the shelf amid talks with the transitional government.

Sudan’s civilian-led government has also played a role in Washington’s efforts to convince Arab states to recognize Israel, a strategic gambit begun under the prior US administration.

US Secretary of State Ned Price said earlier this week that last year’s agreement in principle on normalization with Israel would have to be revisited following Burhan’s coup.

Israel, which relied on Burhan as its main liaison in the normalization talks, has so far remained quiet on the issue.