Washington is trying to bring its Middle Eastern allies into line with international efforts to revive the transition to democracy in Khartoum. 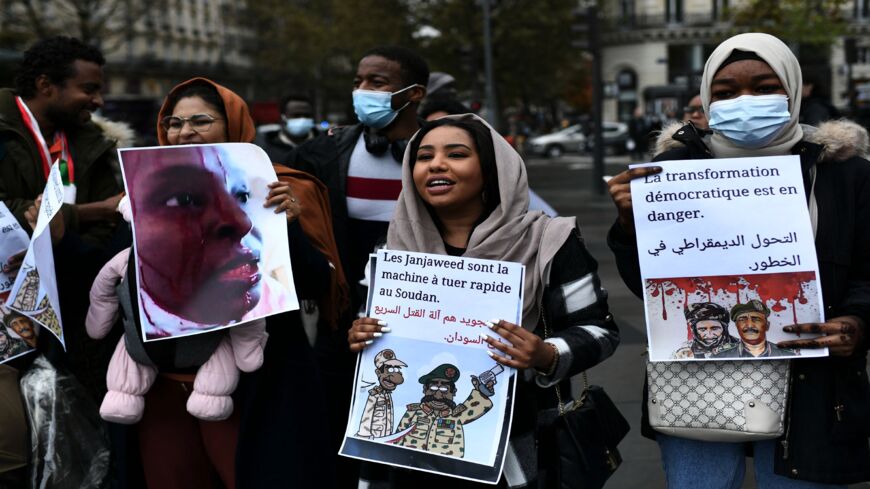 Protestors hold placards and photographs as they shout slogans during a rally to denounce the Sudanese military coup and deadly crackdown that took place earlier in the week, at Place de la Republique, in Paris, on Oct. 30, 2021. - STEPHANE DE SAKUTIN/AFP via Getty Images

The United States, the United Kingdom, Saudi Arabia and the United Arab Emirates released a joint statement on Wednesday calling on Sudan’s military to immediately release those arrested in last week’s coup and to restore the country’s civilian-led transitional government.

The quartet also called on the military to lift its state of emergency and urged the country's leaders to restore “a genuine civil-military partnership for the remainder of the transitional period” until nationwide elections are held in 2023.

"Violence has no place in the new Sudan. On this point we encourage an effective dialogue between all parties, and we urge all to ensure that the peace and security for the people of Sudan is a top priority," the statement read.

Why it Matters: This is the clearest condemnation yet from Washington’s Gulf partners since Lt. Gen. Abdel Fatah al-Burhan seized power in Khartoum on Oct. 25.

The coup was swiftly condemned by the United Nations and a broad array of world leaders. It also led to suspensions of $700 million in US financial assistance and distributions of roughly $2 billion in aid set aside for Sudan by the World Bank.

Up to $19 billion in international debt relief for Sudan is now in jeopardy, State Department spokesperson Ned Price noted today.

The UAE, Saudi Arabia and Egypt, however — key regional players with longstanding ties to the coup’s leaders — had previously offered only tepid statements of concern following the takeover.

Israel, which has sought to build formal relations with Sudan for the first time, also avoided publicly condemning it.

Biden administration officials have held a flurry of calls with foreign officials, emphasizing the need for a unified opposition to Burhan's seizure of power. Secretary of State Antony Blinken discussed Washington's view on the issue with his Saudi and Emirati counterparts in separate meetings this week.

Jeffrey Feltman, Washington’s top envoy for the Horn of Africa region, seemed to hint yesterday at differences between Biden administration officials and UAE leadership over how Sudan’s leaders should move forward.

“Our analysis is that the stability in Sudan depends on restoring that partnership between the civilians and the military that was part of the transition,” Feltman told reporters.

The envoy said Washington "would be supportive of a Sudanese solution" within the bounds of the country's constitution once Prime Minister Abdalla Hamdok and other detained leaders are released and allowed to return to office.

What’s Next: US officials are hoping that economic pressure and broad international disapproval will convince Sudan’s generals to reverse course.

Egypt is now the only regional player that has not publicly objected to the coup, despite urging behind the scenes by American officials.

Meanwhile in Khartoum, negotiations between the various parties are ongoing. A resolution may take shape as soon as this week, the UN's top envoy for Sudan said Monday.

Biden administration officials are not mediating the talks. However they have privately made clear that Prime Minister Hamdok should be allowed either to restore Sudan’s transitional cabinet or assign a new one without the generals’ interference.

That remains easier said than done, at least until Hamdok is freed from house arrest.

Even if Burhan and his co-conspirators prove willing to compromise, they could refuse to surrender control of the armed forces in the foreseeable future, as laid out in Sudan’s transitional process.

In that case, the junta would keep their veto on the country’s future.

Know More: Read Ayah Aman's piece on how the coup in Khartoum is likely to complicate the African Union's efforts to mediate Cairo's dispute with Ethiopia over the Grand Ethiopian Renaissance Dam (GERD).