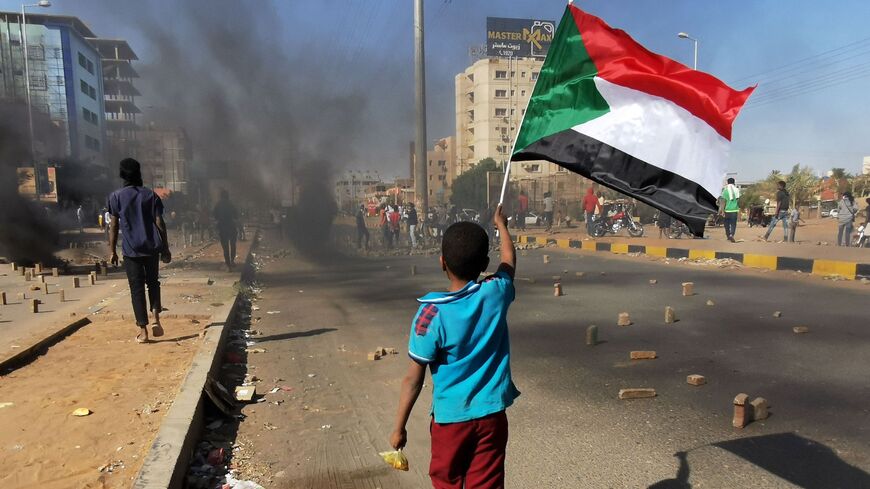 A young boy waves a national flag as protesters block a street in the Sudanese capital Khartoum during a demonstration against the killings of dozens in a crackdown since last year's military coup on Jan. 20, 2022. - AFP via Getty Images

The Biden administration is doubling down on its refusal to deliver planned debt relief and financial aid to the government of Sudan until a military junta restores a civilian-led government after seizing power last year.

The top US diplomat for Africa, Molly Phee, and newly appointed Horn of Africa envoy David Satterfield met with Sudanese military leaders as well as representatives of the pro-democracy movement and civil society in Khartoum on Wednesday to push for a return to civilian-led transitional government.

Phee and Satterfield “underscored that the United States will not resume paused assistance to the Sudanese government absent an end to violence and a restoration of a civilian-led government that reflects the will of the people of Sudan,” the US Embassy in Khartoum said in a statement Thursday.

US humanitarian aid to the Sudanese people will continue, however, as the country faces rampant inflation and unemployment, as well as continued violence in Darfur.

The United States initially froze some $700 million in financial assistance to Sudan following the Oct. 25 coup and international bodies such as the World Bank and other international contributors followed suit.

Several billion dollars of sorely needed debt relief are now on pause for Khartoum, which holds tens of billions in international debts following three decades of economic mismanagement and international isolation under the Omar al-Bashir regime.

Bashir was overthrown in a 2019 pro-democracy uprising and his regime was replaced by a joint civilian-military transitional government that has planned to hold democratic elections by 2023. The United States and UN have spearheaded efforts to support the transition.

But military leaders led by Gen. Abdel Fattah al-Burhan seized upon disputes within the transitional government to depose its civilian leadership and declare emergency law in Sudan in October.

“The military leaders of the Sovereign Council … offered their commitment to inclusive national dialogue, the political transition the establishment of a civilian-led government based upon consensus,” the State Department said following Phee and Satterfield’s visit to Khartoum yesterday.

On Tuesday, the two diplomats met in Riyadh with officials from EU countries, Norway, the United Kingdom, Saudi Arabia and the UAE to discuss ways forward for Sudan’s transition to democracy.

The renewal of Washington’s stance comes amid increasing questions about whether Biden administration officials have been willing to restore aid in spite of the Sudanese military’s power grab in the interest of maintaining strategic ties with Khartoum.

Washington’s support for UN envoy Volker Perthes’ new initiative to bring the various Sudanese stakeholders to the table to iron out the post-coup crisis came after debates within the State Department over how to deal with Sudan's military leaders.