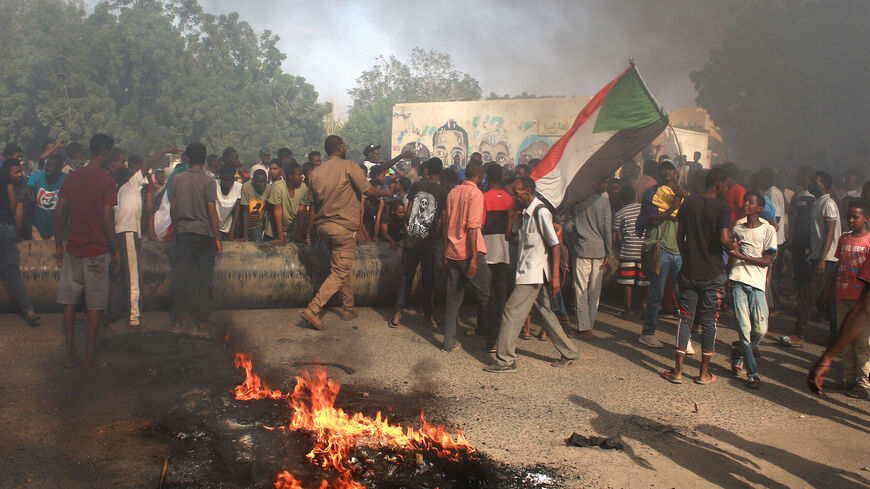 Sudanese men protest against a military coup that overthrew the transition to civilian rule, on Oct. 25, 2021 in the al-Shajara district in southern Khartoum. - AFP via Getty Images

The United States is freezing $700 million in financial assistance to Sudan after the country’s military dissolved the government and arrested top civilian leaders, including Prime Minister Abdallah Hamdok.

The Biden administration condemned the military takeover on Monday and urged its leaders to reverse course.

“Military officials should immediately release and ensure the safety of detained political actors, fully restore the civilian-led transitional government, and refrain from any violence against protesters,” State Department spokesperson Ned Price told reporters during a press briefing on Monday.

Sudanese security forces struck before dawn on Monday morning, surrounding the homes of top government officials and arresting them.

Lt. Gen. Abdel Fattah Burhan, who heads Sudan’s armed forces, announced Monday that the country’s civilian-led transitional government had been dissolved, but said that national elections would still proceed as planned in July 2023.

The move spurred protests in the capital, Khartoum, and its twin city across the Nile, Omdurman. Three people have been reported killed in clashes with security forces, with more than 80 wounded, according to the Central Committee of Sudanese Doctors.

Tensions had been simmering between military officials and Sudan’s civilian leadership for months. Prime Minister Hamdok last month slammed what he and other top officials called an attempted coup by factions loyal to deposed dictator Omar al-Bashir.

The coup came just one day after Washington’s top envoy to the region, Jeffrey Feltman, met with Burhan and Gen. Mohamed Hamdan Dagalo (known as “Hemedti”) to urge respect for the civilian-led transition.

“We were not given any heads up about this,” State Department spokesperson Price assured reporters today.

The coup, which has been widely condemned by the US and international allies, marks a major setback for Sudan’s transition to democracy. It also throws a wrench into Washington’s efforts to help stabilize Sudan and rehabilitate it into the global economy.

Sudan’s government has been in the hands of a joint civilian-military caretaker government since military leaders – among them Burhan – ousted former dictator Omar al-Bashir in 2019 amid widespread popular protests.

Sudan is also among a handful of Middle Eastern states that agreed to recognize Israel under US pressure during the Donald Trump administration. Price said Monday that that understanding, which was supported by Sudanese military officials, “will have to be evaluated.”

Despite the promising reforms, Sudan remains on a US government blacklist due to the 1989 coup, and will remain there until a democratically elected government takes office in the country, Price reiterated on Monday.

Asked whether the US would reimpose longstanding sanctions on Sudan, Price said, “It is very early hours. This happened overnight. Suffice it to say, we are willing to resort to any and all appropriate measures to hold accountable those who may be attempting to derail the will, the aspirations, of the Sudanese people, and those who may be responsible for violence … that we may yet see.”

Courts and the law
Defense/Security cooperation