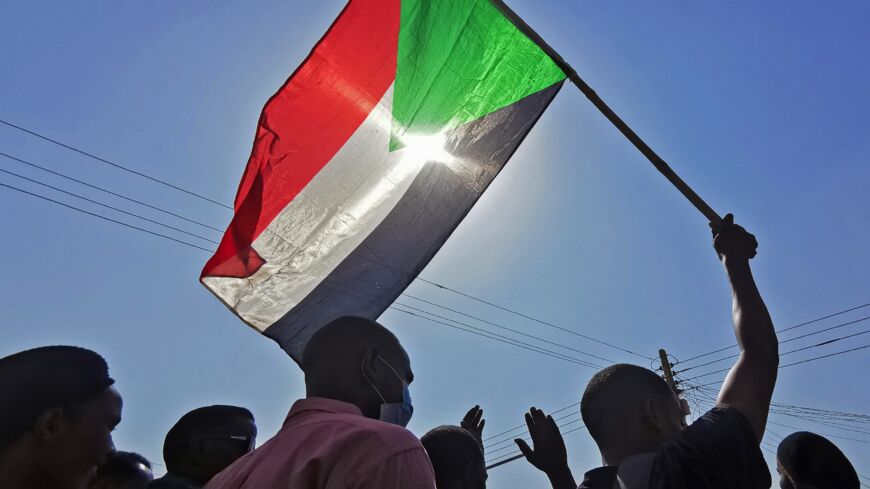 Sudanese protesters raise a national flag as they rally against the October 2021 military coup, in the capital, Khartoum, on Jan. 13, 2022. The demonstrations, which converged from several parts of Khartoum, came only days after the United Nations launched a bid to facilitate talks between Sudanese factions. - AFP via Getty Images

Two top US diplomats departed for Saudi Arabia and Sudan on Monday to promote a United Nations-backed initiative to reconcile Sudan's various military leaders and its pro-democracy movement following an October military coup.

Newly appointed US special envoy for the Horn of Africa David Satterfield and Washington’s top official for Africa policy Molly Phee attended a meeting in Riyadh designed to promote the UN initiative today.

The pair are set to head to Khartoum to meet with military leaders, representatives of Sudan’s democracy movement, civil society groups and political figures, according to a State Department press release.

The three-day trip will also include a stop in Ethiopia’s capital, where Satterfield will urge Prime Minister Abiy Ahmed to halt his government’s attacks against Tigrayan rebels in the country’s north after Addis Ababa’s forces routed a rebel offensive in recent months.

The visit is Satterfield’s first since assuming the envoy role earlier this month.

It comes as Sudan’s pro-democracy coalition called for a renewed campaign of civil disobedience after security forces killed seven people and injured at least 100 others yesterday.

Monday’s crackdown marked one of the bloodiest days since Sudan’s military overthrew the transitional government on Oct. 25 in a move that triggered swift international condemnation.

Sudan’s Prime Minister Abdalla Hamdok resigned on Jan. 2, leaving the military in full control and saying he had failed to shepherd his government along the planned transition to democracy that began with the 2019 popular overthrow of longtime dictator Omar al-Bashir.

More than 50 people have been killed since the October coup, according to the Sudanese Doctors’ Association.

In a statement issued Monday, Sudan’s Sovereignty Council, which is led by the coup’s main leader, Gen. Abdel Fattah al-Burhan, praised security forces’ response to the unrest and announced that a special counterterrorism force would be created “to confront potential threats.”

Feltman was the first US diplomat to serve in that role after it was created by the Biden administration last year as overlapping crises threatened to plunge the region into disarray.