Intel: US sees role for Sudan’s military in government if coup reversed 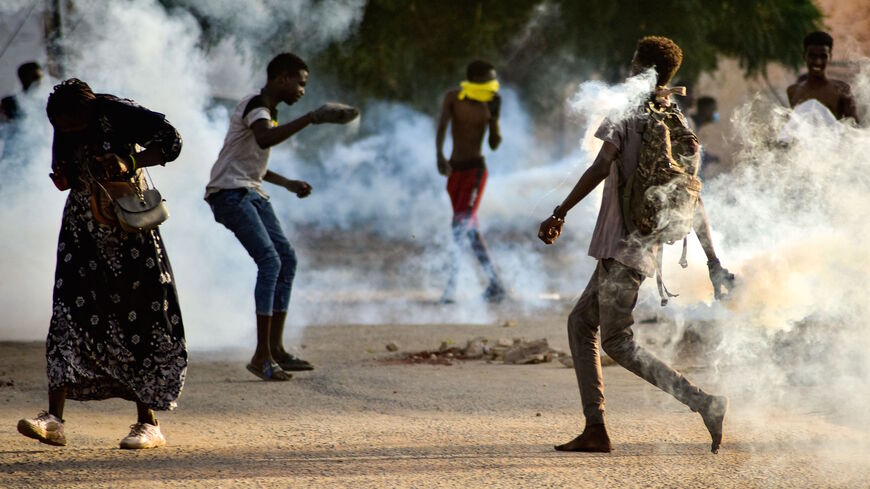 Sudanese youths confront security forces amidst tear gas fired by them to disperse protesters in the capital Khartoum, on Oct. 27, 2021, amid ongoing demonstrations against a military takeover that has sparked widespread international condemnation. - AFP via Getty Images

Sudan’s generals have “hijacked” the country’s pro-democracy revolution, but it’s not too late to reverse course, the top US envoy for the Horn of Africa region said Tuesday.

“If Gen. [Abdel Fattah al-]Burhan wants to have his statements about elections and the constitutional declaration be considered credible, he needs to allow the civilian government to resume its work,” Ambassador Jeffrey Feltman told reporters by phone from Washington.

Under Burhan’s command, Sudan’s military seized power last Monday in a coup widely condemned by the UN and international leaders.

The military detained several civilian leaders tasked with preparing Sudan for its first democratic elections in decades. Nonetheless, the general has insisted his country would head to the polls on schedule in 2023.

The US envoy on Tuesday reiterated Washington’s demand that the military release Prime Minister Abdalla Hamdok from house arrest and return to the constitutional process agreed upon for Sudan’s transition to democratic rule.

The reiteration of the Biden administration’s stance came a day after the UN’s special envoy for Sudan, Volker Perthes, said “multiple” international channels were working to mediate the crisis in Khartoum. The “contours” of a reconciliation agreement are likely to become “visible” over the next few days, Perthes said during a virtual press briefing Nov. 1.

The UN has been supporting “a couple of these efforts, proposing initiatives and ideas and coordinating with some of these mediators,” the envoy told reporters.

Why it Matters: As negotiations drag on, the Biden administration is publicly making clear that it stands fully behind Sudan’s civilian leadership.

The US froze a massive $700 million in financial assistance (but not humanitarian aid) to Khartoum in response to the coup last week. The funding was the result of nearly two years of painstaking diplomatic negotiations and hard-fought reforms promised by Sudan’s transitional government.

The World Bank also halted aid its roughly $2 billion in packages to the heavily indebted and impoverished country last week in response to the coup.

“I think that the military will recognize that they need the type of international support that was being given to the transitional authorities,” US special envoy Feltman told reporters Tuesday.

“The way to restart that type of international support is to restore the civilian transitional authorities,” he said.

What’s Next: Sudan’s promising transition to democracy is balanced on a knife-edge as Washington weighs its next move.

Feltman floated an olive branch to the Sudanese military on Tuesday.

“The military does have an important role to play in the transition,” Feltman said, as well as “after democratic elections, when you have a military under the control of democratic authorities.”

But after decades close to the throne, Burhan and his co-conspirators appear to be attempting to skirt just such a subordinate role.

Bloomberg reported Tuesday that Sudanese officials were discussing a proposal in which Hamdok may return as prime minister, but Burhan appoints a new cabinet and the army maintains control of Sudan’s security and defense bodies.

Still, some analysts think that Burhan and Gen. Mohamed Dagalo (“Hemedti”) may have bitten off more than they can chew.

Despite Burhan’s grandiose claims of restoring the 2019 revolution, the coup so far appears to lack popular legitimacy, given broad protests across the country.

So far the scale of those demonstrations is yet hard to measure, as the UN’s envoy noted Monday. How many Sudanese will take to the streets, and how long they will remain, is yet to be seen.

For now, the Biden administration appears to be counting on economic pressure to bog down any potential efforts by the military to float public support.

Washington officials have also been talking with the leaders of Sudan’s powerful neighboring states.

Saudi Arabia, the UAE, Egypt and Israel are also engaged in negotiations to bring stability to Sudan, although their positions may differ from Washington on details.

Feltman suggested on Tuesday that leaders in Abu Dhabi, Moscow and other regional capitals also share Washington's aim for stability in Sudan, but implied that these governments may disagree on how to achieve that.

Throughout the rocky transition, Burhan and Hemedti have held close ties to Gulf states, Egypt and Israel.

Know More: Keep a close eye on Sudan’s talks with Russia over a naval base at Port Sudan.

Kirill Semenov argues the coup only makes Khartoum’s military ties with Moscow more likely — an outcome US Africa Command has sought to outpace.

But bound back by legal restrictions surrounding Sudan's previous coup in 1989, it's less likely the Pentagon will be setting up shop in Khartoum to train alongside Sudanese forces anytime soon.