Ethiopia and China recently signed an agreement to protect investment projects, at a time Egypt and Sudan are seeking an international quartet to break the deadlock in the negotiations on Addis Ababa’s controversial Nile dam. 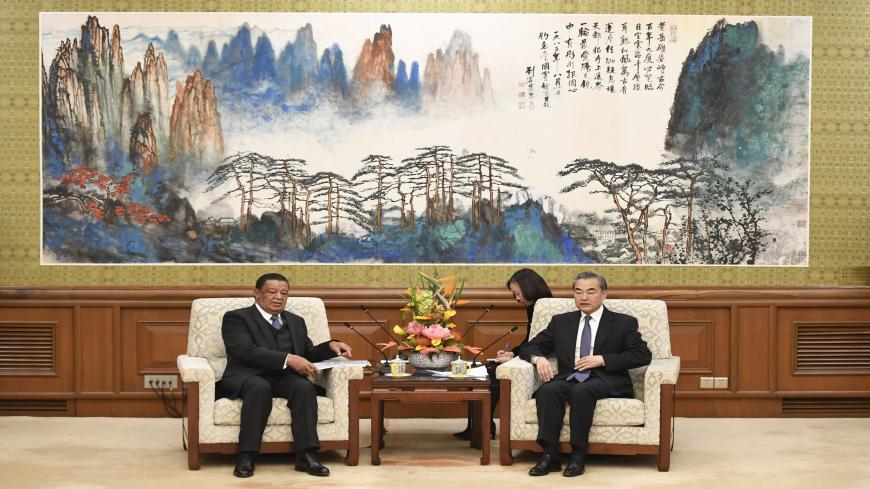 CAIRO — On March 6, the commissioner-general of the Ethiopian Federal Police, Demelash Gebremichael, signed a memorandum of understanding with the Chinese ambassador to Ethiopia, Zhao Ziyuan, on establishing a protection mechanism for the security of major projects implemented within the framework of the Belt and Road Initiative in Ethiopia.

During the signing ceremony, Gebremichael said this agreement will boost safety and security in the country's major development projects.

He continued, “Ethiopia and China are two countries that have a long history, ancient civilization and splendid culture. To achieve our goal, the support provided by China and its esteemed embassy plays an important role. We wish to continue our joint efforts in long-term construction and strategic partnership, and today’s event comes at a critical time.”

According to the Chinese agency Xinhua, the agreement will play an important role in enhancing the security and normal course of Chinese investments in Ethiopia.

As soon as the agreement was concluded, questions arose about its importance and timing. Ethiopian activist and analyst Munir Adam tweeted March 8 that amid Sudanese-Egyptian pressure on Ethiopia, Beijing concluded an agreement with Addis Ababa to protect and secure huge projects in the country.

The Ethiopian move comes after Egypt and Sudan signed an unprecedented military agreement to secure the borders and protect the national security of the two countries during the March 2 visit of the Egyptian army chief of staff, Lt. Gen. Mohamed Farid, to Khartoum.

Regarding the timing of the agreement, Maj. Gen. Gamal Mazloum, a military analyst and adviser at the Nasser Military Academy, told Al-Monitor that Ethiopia is seeking to bring in international parties in response to the Egyptian-Sudanese military alliance. According to Mazloum, Ethiopia is concerned about an Egyptian-Sudanese military intervention to strike the Grand Ethiopian Renaissance Dam (GERD), as the dam is only 15 kilometers (9 miles) from the Sudanese border. It is an easy target for Egypt, as it would not need drones, long-range missiles or military bases, he said.

Mazloum noted that the recent Egyptian moves, President Abdel Fattah al-Sisi’s visit to Sudan, his warning to Ethiopia from within the Sudanese territories and Egypt’s recent communication with the United Nations sent a clear message to Ethiopia and the international community, whereby Egypt will not accept the second filling of the GERD before reaching a binding legal agreement between the three parties. Otherwise Egypt will strike the dam to protect its water rights, he added, which would prompt Ethiopia to take action.

Sisi paid an official visit to Sudan March 6 and announced his rejection of any unilateral measures by Ethiopia to impose “a fait accompli and monopolize the resources of the Blue Nile.”

On March 9, Sisi said during an extended meeting with leaders, officers, noncommissioned officers and soldiers of the armed forces that the Nile River “is our life and the life of our brothers in Sudan. We insist on proceeding with our negotiations, but our negotiations are not without end.”

Regarding the impact of the Ethiopian-Chinese agreement on the Egyptian position, Mazloum said, “This step is expected, and Egypt knows very well that Ethiopia will move to involve foreign parties to support it, as it has previously tried to push Turkey to intervene. Consequently, this step will not affect the Egyptian position, and Egypt will not reconsider striking the dam, unless the international community takes action, or Ethiopia agrees to postpone the second filling scheduled in July until an agreement is reached.”

On Feb. 17, the Ethiopian Ministry of Foreign Affairs called on Turkey to intervene to solve its border crisis with Sudan.

On March 31, 2015, the Ethiopian parliament ratified the Defense Cooperation Agreement between Turkey and Ethiopia.

Samir Ghattas, former member of parliament and head of the Middle East Forum for Strategic Studies, told Al-Monitor that China will not intervene to support Ethiopia in confronting Egypt. He said, “Despite China's keenness to consolidate ties with Ethiopia and its enormous investment in Addis Ababa, I do not expect it to intervene to support Ethiopia [in the GERD issue], because Egypt is an important and pivotal country for China, and a pillar of investment in Africa. China fears the deterioration of its relations with Egypt, and it does not want to give the United States the opportunity to take over the Egyptian market.”

On Feb. 25, the Chinese Embassy in Cairo said that China is the most active country to invest in Egypt in recent years. According to statistics of the Chinese Ministry of Commerce, the volume of new direct investments in Egypt reached about $190 million in 2020, recording an annual increase of 83.4%, which is a record number.

Meanwhile, on March 5, the Chinese ambassador to Egypt, Liao Liqiang, said in an interview with DMC channel that China is keen on achieving strategic consensus with Egypt, adding that there is ongoing cooperation between the two countries in the fields of the rule of law and security.

“China is supporting Chinese companies to invest in Egypt in the infrastructure and information technology fields, as part of efforts to boost the partnership between the two countries,” Liqiang added.

On Oct. 25, 2020, the United States asked Egypt not to deal with Chinese companies to obtain the 5G technology, and to seek the assistance of American companies instead.

Shifa al-Afari, political writer and analyst on African affairs, considered that a military strike on the dam could ignite the African continent. He told Al-Monitor, “Ethiopia is a disintegrated state, and its army has become dilapidated in border crises and internal wars with the Tigray People's Liberation Front [TPLF]. It is natural that it would summon international parties to support it in the event of a military strike against it.”

On Nov. 5, 2021, the central government in Ethiopia announced a military operation on the Tigray region, to “reimpose the authority of the federal government in the region governed by the TPLF.”

On March 1, the Sudanese army was able to recover lands in al-Fashqa al-Kubra region in the state of Gedaref after violent confrontations with Ethiopian forces.

On March 9, Al-Arabiya TV cited sources as saying that Egypt and Sudan had submitted a request to Washington to intervene to solve the GERD issue. According to the sources, the United States would intervene in the coming phase, given Ethiopia's intransigence.

Ethiopian writer and political analyst Noureddin Abda told Al-Monitor that Ethiopia is following up on the unprecedented Egyptian support to Sudan, namely when it comes to taking over Ethiopian lands across the border and the military agreement signed recently between the two countries. This has pushed Ethiopia to seek new alliances to confront this Egyptian-Sudanese alliance, he said.

Abda noted, “Ethiopia is now seeking to take advantage of its relations with various countries to confront the Egyptian-Sudanese alliance. Ethiopia has previously asked Turkey to intervene as a mediator in the border crisis, and it [Ethiopia] is now seeking Chinese support in this issue.”

He added, “I expect Ethiopia to seek new alliances with African countries in the coming days in the face of the Egyptian-Sudanese alliance. Ethiopia wanted to send a message to the international community that it is capable of establishing alliances, and that any military escalation will affect the whole region.”

Sherif el-Gabaly, head of the Egyptian parliament’s African Affairs Committee, told Al-Monitor, “We, at the African affairs committee, support a political solution, and this has been the position of the political leadership for the past years. Egypt wants to protect its water rights, since water is vital for both the Egyptian and Sudanese peoples. Ethiopia refuses to recognize the rights [of Egypt and Sudan] and refuses to respond to Egypt’s requests.”

He added, “We are also backing the formation of an international quartet in the GERD negotiations, which Ethiopia also rejects, since the participation of the international community would give any deal a major push to reach a legal binding agreement. But the Ethiopian intransigence is complicating matters.”