Egyptian President Abdel Fattah al-Sisi has recently warned against messing with Egypt’s rights to the Nile River waters, in the first such threat against Ethiopia since talks on Addis Ababa’s controversial Nile dam have stalled. 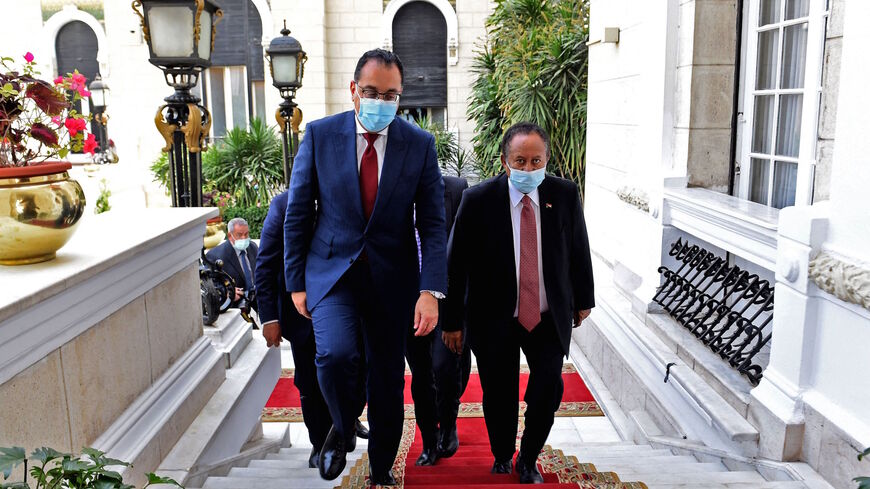 CAIRO — Egyptian President Abdel Fattah al-Sisi has directly threatened Ethiopia for the first time since the dispute erupted over the Grand Ethiopian Renaissance Dam (GERD), amid the failed and stalled negotiation rounds under the auspices of the African Union (AU). “No one is allowed to take away a single drop of water from Egypt; no one can even imagine the instability that will ensue in the region if such a thing were to happen. No one should dare question our capabilities. But if they want to put us to the test, then so be it.”

Sisi's threats came during a press conference on March 30 on the sidelines of his visit to the Suez Canal Authority (SCA), after the giant Ever Given container ship was refloated after being stuck in the Suez Canal for nearly a week. “We have never made any threats; we have always had a rational, patient approach,” Sisi said, adding, “Hostile action is ugly and has effects that extend for many years because people never forget such actions. Egypt’s water is off limits. If anyone were to cross this red line, our response would affect the stability of the entire region.”

In a separate statement, Sisi stressed the pivotal importance of Egypt to serve and protect international interests through its geographical location, especially after the global losses that followed the Suez Canal’s six-day blockage as the Ever Given was stuck. As soon as the ship was refloated, Sisi took to Facebook on March 29 and said, “We were able to get things running normally again so the world can rest assured that its goods and needs that pass through this pivotal navigation artery are back on track.”

It has been six years since Egypt, Sudan and Ethiopia signed the Declaration of Principles in March 2015, whose 10 clauses defined the rules of filling the GERD and reducing any potential risks to the security of the Egyptian and Sudanese water resources. However, technical and legal discussions between the three countries have been in vain, especially since Ethiopia has been taking unilateral decisions to complete the construction at the dam site, implemented the first-phase filling in July 2020, and plans to move forward with the second-phase filling in July this year despite Egyptian and Sudanese objection, as they consider this action a direct threat to their national security.

Ayman Abdel Wahab, an expert in political affairs and deputy director of Al-Ahram Center for Political and Strategic Studies, told Al-Monitor, “Sisi's speech was a message of deterrence not only to Ethiopia, but to all the parties that directly or indirectly support Ethiopia’s intransigence, which is a serious matter than can severely damage Egyptian strategic interests.”

Abdel Wahab noted, “Sisi’s deterrence messages come at a time when Ethiopia has an expansion project at the expense of neighboring countries, and it is assisted by regional and international powers. Ethiopia will not back down from its practices in the Nile waters without real international pressure.”

He added, “There is still a chance for dialogue, but it will go away if Ethiopia takes actual measures to start the second-phase filling, with the central part of the dam being elevated.”

In response to Sisi's statements, a number of Arab and African countries, including Saudi Arabia, Bahrain, Jordan, Oman and Kuwait, issued statements to back the Egyptian position that Egyptian water security is part of Arab security and to support any efforts that contribute to ending the GERD crisis while taking into account the interests of all parties.

The Democratic Republic of the Congo (DRC), in its capacity as AU Chair, invited the foreign ministers of Egypt, Sudan and Ethiopia to meet in Kinshasa over a period of three days starting April 3, without adhering to the international quartet mechanism that Egypt and Sudan had proposed in March to have the AU, the United States, the European Union and the United Nations mediate in the negotiations, which Ethiopia rejected.

The foreign ministers' meeting will take place after the UAE tried to play a mediating role between Sudan and Ethiopia to resolve the border crisis and the GERD issue, without including Egypt. A Sudanese delegation, including the foreign and defense ministers, traveled to the UAE on March 26, but the visit’s outcome is yet to be announced.

The UAE's mediation between Ethiopia and Sudan, without including Egypt, was interpreted by observers of African affairs in Egypt as an attempt to break and weaken the recent Egyptian-Sudanese coordination against Ethiopia's policies on the GERD.

Hani Raslan, an expert on African affairs at Al-Ahram Center for Political and Strategic Studies, posted on his Facebook account, warning against the dangers of concluding a bilateral agreement between Addis Ababa and Khartoum on the second filling, saying, “Once the second filling of the dam’s reservoir is completed, Sudan will turn into a hostage to Ethiopian decisions. This would weaken any objections or political or legal reservations toward Ethiopia and its actions in the Nile waters in the future. Storing 18.5 billion cubic meters means that Ethiopia has the ability to flood Sudan by simply opening the gates of the dam.”

Khaled Wasif, a water resource expert, told Al-Monitor, “President Sisi carefully selected the words he used in his statement. There was no direct threat to strike the dam or prevent the second filling directly, which refutes the claims made by Ethiopia to the international community about Egypt being an arrogant bully.”

Wasif added, “The real crisis lies in the absence of an agreement regulating water management in the Nile Basin and separating the interests of the upstream and downstream countries, which is why the dispute over the river's waters will remain as it is.”

Egyptian officials never mentioned Egypt resorting to the military option to settle the dispute over the GERD and forcing Ethiopia to sign a binding agreement that reduces the expected damages from filling and operating the dam — even when Egypt sought to bring the GERD crisis up before the Security Council in 2020.

Even after Ethiopia took a unilateral decision to move forward with the first filling of the dam’s reservoir in July 2020, Sisi stated, “Egypt is keen to deal with the GERD crisis through negotiation and not resort to the military option.”

On March 31, the Egyptian armed forces announced the launch of the joint air training maneuvers with Sudan, dubbed Nile Eagles 2, at the Meroe air base in northern Sudan, with the participation of the air forces of both countries. A number of joint sorties were performed to attack enemy targets and carry out several shots from different firing positions as well as protect vital targets. This set of training is part of a series of military exercises between the two countries that began in November 2020.

The possibility of resolving the GERD conflict through negotiations is subject to the meeting of foreign ministers in the DRC on April 3, which may be the last opportunity for dialogue before Ethiopia begins to complete the second filling of the dam reservoir in July.

However, during her meeting with the US special envoy for Sudan, Donald Booth, on March 31, Sudanese Minister of Foreign Affairs Asma Mohamed Abdalla might have alluded to a possible new disruption, saying, “Ethiopia is betting on gaining time to complete the second filling, which is not to be tolerated.”