Egypt denied reports that some friendly states financially contributed to the construction of Ethiopia’s controversial dam on the Blue Nile. 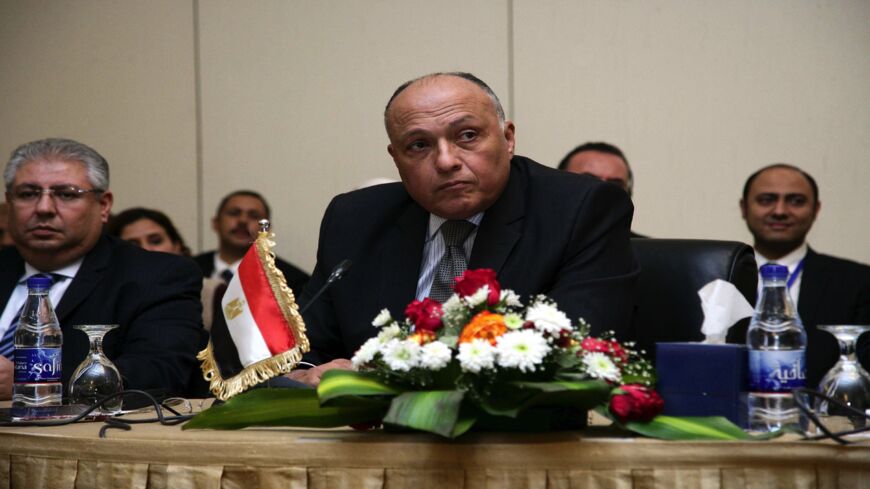 Egyptian Foreign Minister Sameh Shoukry (C) looks on during another round of talks on the Grand Ethiopian Renaissance Dam (GERD) project that has strained ties between Cairo and Addis Ababa in the Sudanese capital, Khartoum, on Dec. 29, 2015. - EBRAHIM HAMID/AFP via Getty Images

Egypt’s Foreign Minister Sameh Shoukry has recently revealed that there are no friendly states with whom Egypt is on good terms that directly funded the construction of the Grand Ethiopian Renaissance Dam (GERD).

In remarks made at Egypt's parliamentary African Affairs Committee meeting on April 15, Shoukry said, “Our international partners perceive that the GERD is disputable. That is why they avoid getting involved in the crisis on its funding.”

He indicated that multiple African countries look forward to boosting cooperation with Egypt, particularly since the rupture that followed the assassination attempt against former President Hosni Mubarak in Addis Ababa in 1995 is now over. He stressed that President Abdel Fattah el-Sisi is keen on reactivating Egypt’s relations with Africa, and his participation in all African Union (AU) summits since 2014 is great proof of that.

He added that Sisi was keen to make several visits to Africa and recently hosted a large number of African officials in order to further cooperation based on mutual interests and respect.

Shoukry also explained that the Egyptian Agency of Partnership for Development played a pivotal role in a number of sectors in Africa, so as to create strong ties with the African brothers, and he emphasized that Egypt is an integral part of Africa, especially now, and is keen to maintain its role in supporting the capabilities of its African brothers.

He pointed out that the Egyptian role in Africa is not limited to the promotion of bilateral relations, but also multilateral relations, as Egypt is a key part of African solidarity and joint positions in the international forums.

Shoukry further said that his country is still committed to the negotiations on the GERD, despite Addis Ababa's intransigence, and that the existing disputes over the GERD between Ethiopia on the one hand and the two downstream countries, namely Egypt and Sudan, on the other, make it hard to invest in the GERD. “That does not mean that we are in an ideal world; everything depends on the countries’ policies,” he said.

The recent AU-sponsored negotiations round on the GERD held in Kinshasa did not lead to an agreement between Egypt, Sudan and Ethiopia on the dam’s filling and operation mechanism.

Shoukry added in his remarks to parliament that the Aswan High Dam reservoir enables Egypt to absorb many of the GERD filling repercussions, and he claimed that “the construction of the Aswan High Dam has been part of the Egyptian political leadership’s vision for the long term under the past rules. The state’s effort to build the dam was focused on the optimization of its water resources, the spending on modern irrigation and water recycling.”

“We do care about the potential damage that may be caused to our brothers in Sudan, as the second filling of the GERD approaches, namely in nearly three months. That is something we do not accept. Shoukry said. “The technical appraisal indicates that no damage will be caused to Egypt in case Ethiopia carries on with the second filling. Yet these are only anticipations, and everything depends on accurate studies that are currently being carried out.”

The Ethiopia-Egypt dispute revolves around the GERD filling time and operation.

On April 10, Ethiopia said that the second filling of the GERD reservoir will proceed as planned, namely in the next rainy season (July-August), and expressed willingness to share with Egypt and Sudan data on the filling.

Moreover, Shoukry warned that Ethiopia is carrying out other projects on the Blue Nile, saying, “The international agreements and treaties must be respected, and the other countries’ interests must not be harmed. Egypt's position is very clear and aims at a legal and binding agreement because Cairo will not allow any harm to be caused to the country.”

Shoukri added, “Egypt aims to activate the role of international observers such as the United States and the AU. The Ethiopian intransigence was witnessed by the international community to which Egypt resorted after no stone had been left unturned.”

Addis Ababa rebuffed the Egyptian-Sudanese proposal to have an international quartet mediation consisting of the United States, the United Nations and the European Union, alongside the AU, two days after Shoukry addressed a letter to the UN secretary-general and UN Security Council president focusing on the developments related to the GERD and the stalled negotiations.

Cairo and Khartoum have demanded that they first reach a binding legal agreement on the GERD filling and operation and data sharing mechanism so as to protect their facilities built on the Nile River, as well as to establish a dispute settling mechanism among them.

Hani Raslan, head of the Sudan and Nile Basin Countries Unit at Al-Ahram Center for Political and Strategic Studies, told Al-Monitor via phone about a list of countries funding the GERD. He affirmed that Egypt is not only facing Ethiopia, but rather an alliance, whether in the region or at the international level, and he explained that Ethiopia receives international support from Qatar, Turkey, China and the EU.

He added, “Egypt has proven to be a noble state and continues to hold onto a cooperation approach despite the Ethiopian intransigence.”

Salameh stressed that the General Intelligence Service and Military Intelligence should take over the GERD file because the matter has gone beyond the role of the Foreign Affairs Ministry and Irrigation and Water Resources Ministry. He added that there is popular momentum and support behind the leadership in Egypt so as to deal with the dam.