Saudi Arabia has stated its step into the deadlock between Egypt, Sudan and Ethiopia over Addis Ababa’s controversial dam on the Nile River, but just what Riyadh has new to offer is unclear. 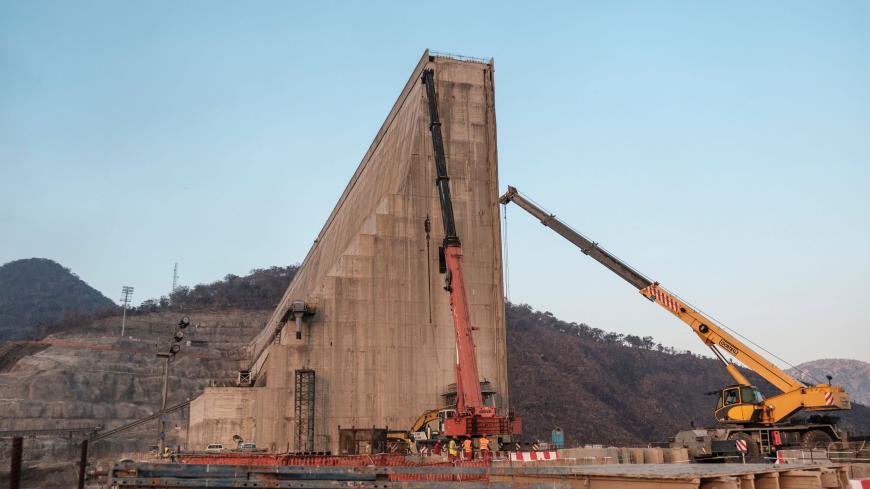 This file photo taken on Dec. 26, 2019, shows a general view of construction work at the Grand Ethiopian Renaissance Dam, near Guba in Ethiopia. - EDUARDO SOTERAS/AFP via Getty Images

CAIRO, Egypt — Saudi Arabia has announced its intention to mediate in the dispute over the Grand Ethiopian Renaissance Dam (GERD) during visits by Minister of State for African Affairs Ahmed al-Kattan to Addis Ababa and Khartoum in February.

Kattan announced Feb. 17 that the kingdom plans to hold a summit for the presidents of Egypt, Sudan and Ethiopia to resolve the ongoing dispute over the filling and operation of the GERD.

Tension has soared since Ethiopia announced that the second phase of filling the dam's reservoir will take place in July.

Saudi Arabia has expressed interest in mediation before. The Saudi cabinet stated in June 2020 that “water security for Egypt and Sudan is an integral part of Arab security” and stressed the need for a fair agreement that takes the interests of all affected parties into account.

The kingdom also seems to be interested in boosting its relationship with Ethiopia. Improved relations with Ethiopia would strengthen Saudi diplomacy in the Horn of Africa and its economic ties in the region, particularly in the agricultural sector.

In Cairo Feb. 24, Egyptian Foreign Minister Sameh Shoukry discussed with a Congolese official involved in AU affairs the possibility of forming an international quartet to mediate the stalled GERD negotiations that includes the United States, the European Union and the United Nations and the AU.

A government source familiar with the Nile water issue told Al-Monitor on condition of anonymity, “Egypt is open to all initiatives to reach a comprehensive agreement that preserves the interests of all parties. We still believe in dialogue as a way to solve the crisis while rejecting all unilateral actions by Ethiopia.”

The source explained that Egypt still believes the preliminary agreement reached in Washington in February 2020 is an optimal deal that achieves the interests of all parties and reduces the expected negative effects of the GERD’s filling and operation. “Ethiopia ditched this deal.”

The source added, “Until now, no clear formula has been submitted by any of the mediators. The main dilemma is the Ethiopian side's refusal to sign a binding agreement and its attempt to operate the dam in the name of sovereignty without considering the interests of the downstream countries. Contacts are ongoing with Sudan to try to coordinate common positions to confront unilateral moves by Ethiopia.”

Meanwhile, Sudan has been more critical of Ethiopia’s stances on the GERD and the border disputes. The Sudanese Cabinet called Feb. 17 for the negotiations on the GERD to be broadened to include the European Union, the United Nations and the United States, along with the AU. In response to the Ethiopia’s continued insistence on starting the second stage of filling for the dam’s reservoir in July even though an agreement has not been reached, the Sudanese cabinet said the filling of the dam’s reservoir “poses a direct threat to the Roseires Dam, downstream on the Blue Nile. It also threatens irrigation systems, electricity networks and drinking water along the Blue Nile and Nile Rivers up to the city of Atbara, which threatens Sudan’s national security.”

Since the signing of the Declaration of Principles in March 2015, the tripartite negotiations have had no official mediator. The United States, the World Bank and the AU had sponsored previous negotiation rounds and participated as observers.

Despite the inability of international and regional observers to make progress in the negotiation process, Africa watchers believe Gulf countries — given their ties with all parties to the dispute — are well placed to mediate in a manner that could bring together all those involved and achieve progress.

Gulf countries that have investments in Ethiopia are particularly keen to see the dispute resolved.

Musaed Abdel Ati, a professor of international law and a member of the Egyptian Society of International Law, stressed  the importance of mediation in the GERD dispute. He told Al-Monitor, “Mediation is the legal means to settle the dispute. It must be impartial and fair to all the parties to the conflict. This was applied during the World Bank and the US sponsorship of the talks, which culminated in the Washington deal.”

Abdel-Ati added, “Although it is difficult to start new negotiations under Gulf mediation due to lack of time in light of Ethiopia's insistence to begin filling the dam, such negotiations could yield positive results if Ethiopia responds.”

He went on, “Egypt showed flexibility and this allowed the Washington deal to be drafted last February. It wants to reach a fair agreement that takes into account the interests of all parties.”

Abdel-Ati called out Ethiopia for its arrogance and “arbitrary” positions that violate international law and threaten international peace and security. Yet, he noted, “Ethiopia could renounce the second stage of the dam’s filling under regional and international pressure.”

Hani Raslan, head of the Sudan and Nile Basin Countries Unit at Al-Ahram Center for Political and Strategic Studies, disagrees. He told Al-Monitor, “While Saudi mediation is being promoted in the media,” Riyadh's announcement “came a bit too late. Negotiations have been stumbling for more than 10 years while the Gulf kept mute despite its good relations with Egypt.”

Raslan believes the Saudi initiative’s chances for success are limited by the same Ethiopian intransigence that hindered Washington from making additional progress. “Ethiopia is going through difficult internal circumstances, and it has come very close to achieving its goals of dominating the Blue Nile. It will only make concessions under strong pressure. Saudi Arabia could provide incentives, grants or aid, but it does not have the ability to impose pressure.”

He continued, “Efficient pressure on Ethiopia may stem from a joint Gulf and US initiative. The US has several trump cards in its sleeves, especially in light of the Tigray region crisis and the critical situation in which the [Ethiopian] government finds itself.”

With Joe Biden as the US president, Washington announced it was delinking a US pause on Ethiopia aid from its policy on the dam.

US State Department spokesman Ned Price said Feb. 19 that the Biden administration will review US policy on the GERD and will assess the role it can play in facilitating a solution between the countries.

Meanwhile, US or Gulf mediation remains just an idea at this point, awaiting a strong initiative that can break the hard-line Ethiopian position and postpone the filling of the reservoir until until after coordination with Egypt and Sudan to resolve concerns on expected risks.