Ethiopian and Sudanese officials have met separately over the Grand Ethiopian Renaissance Dam, but Cairo and Khartoum are still mostly united in their concerns. 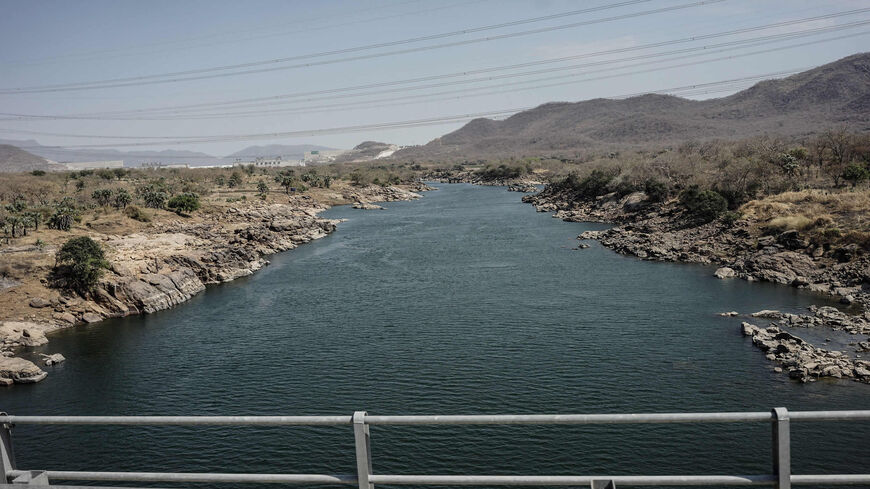 Bilateral talks between Sudan and Ethiopia were held between officials of the two countries for the first time since Addis Ababa embarked on its journey of power generation from its controversial giant hydroelectric dam.

Representatives of Egypt did not attend the meeting.

On March 3, the Sudanese capital, Khartoum, hosted talks between acting Irrigation and Water Resources Minister Daw Al-Bait Abdul-Rahman and Ethiopian Ambassador in Khartoum Petal Amiru in the presence of officials from the Sudanese Ministry of Irrigation and Foreign Affairs.

The meeting comes at a time when the international momentum to help the three countries overcome their differences is waning amid the preoccupation of the West with the Russian invasion of Ukraine.

Ethiopia announced Feb. 20 the partial start of power generation from the dam that Addis Ababa is building on the Blue Nile, the main tributary of the Nile River — a move that was condemned by the two downstream countries.

Egypt and Sudan condemned Ethiopia’s unilateral decisions related to filling and operating the dam, and said that the start of power generation is a violation of the Declaration of Principles Agreement signed by the three countries in 2015 and prohibiting any of them from taking unilateral measures related to the use of the river’s water.

Ethiopia subsequently denounced the Egyptian and Sudanese stance. Spokesperson for the Ethiopian Ministry of Foreign Affairs Dina Mufti said during a press briefing Feb. 24 that the Declaration of Principles does not obligate his country to stop the dam construction and power generation. He stressed that the allegations of the downstream countries are unfounded.

Abdul-Rahman told the Ethiopian ambassador that Khartoum has concerns over the GERD that can only be overcome by a binding agreement that takes into account the interests of the three countries.

He reiterated Sudan’s position in refusing to withhold filling and operating information related to the Ethiopian dam.

The Sudanese News Agency (SUNA) cited Amiru as expressing his country’s keenness on bilateral relations with Sudan and the need to develop them. He also stressed Ethiopia’s understanding of Sudanese concerns related to the operation of the dam.

The discussions that took place seem to be part of a broader effort undertaken by the Sudanese Minister of Irrigation in an attempt to revive the stalled negotiations. In early March, Abdul-Rahman received Egyptian Ambassador to Khartoum Hossam Issa and stressed during the meeting the need to reach understandings between the three countries that would establish an effective new negotiation process.

During the meeting, the Egyptian ambassador conveyed a message to the Sudanese minister from his counterpart, Egyptian Minister of Irrigation Mohamed Abdel-Aty, in which he reiterated Cairo’s full readiness to cooperate and coordinate with Sudan in all fields, including the dam issue.

The talks held under the auspices of the African Union since June 2020 have failed to reach a tripartite agreement on the filling and operation of the dam. Cairo and Khartoum demanded that Addis Ababa stop filling the dam’s reservoir until an agreement is reached.

Ahmed al-Mufti, former member of the Sudanese delegation to the Grand Ethiopian Renaissance Dam (GERD) negotiations, told Al-Monitor that Ethiopia is bothered by the coordination between Egypt and Sudan over the dam crisis.

On Feb. 9, spokesman for the Ethiopian Ministry of Foreign Affairs Dina Mufti said, “Sudan’s position on the GERD serves the interest of a third party, not the Sudanese,” as he alluded to Egypt.

Mufti noted that Addis Ababa is adopting a strategy aimed at deflating coordination between Egypt and Sudan by holding meetings with the Sudanese side alone.

He said that Sudan’s unilateral meeting with Ethiopian officials raises suspicions on the Egyptian side and negatively affects Sudanese-Egyptian water relations. However, he did not expect Ethiopia to reach its goal, noting, “Sudan's interests are consistent with Egyptian interests, as the two countries are voicing several common concerns, including the safety of the dam and the water security of the two countries.”

Sudan’s support for the dam project during the rule of former President Omar al-Bashir granted Ethiopia legitimacy to proceed with the construction process. However, it also caused tension in the already not-so-stable Sudanese-Egyptian relations that were affected by several factors, chief among which is the two countries’ dispute over the dependency of the Halayeb border triangle.

Sudan’s stance was against Egypt’s in the dam dispute until Bashir was overthrown in 2019. With the Sovereignty Council of Sudan taking over the reins of government, Khartoum’s position gradually changed to be more in tune with the Egyptian position.

Since then, relations between Egypt and Sudan have significantly improved, as officials of the two countries exchanged official visits and even embarked on unprecedented military cooperation, including the signing of joint agreements in the fields of training and border security. Add to this joint air maneuvers carried out by the Sudanese and Egyptian armies. However, this military rapprochement between the two countries raised the ire of Addis Ababa.

In the summer of 2021, Cairo and Khartoum managed to push toward adding the GERD issue to the agenda of the United Nations Security Council despite Ethiopia's rejection of this step. Subsequently, the Security Council issued a presidential statement calling on the three countries to continue their talks under the auspices of the African Union, which has since sought to resume negotiations, to no avail.

Egypt and Sudan have repeatedly failed to persuade Ethiopia to agree to a legal agreement regulating the process of filling and operating the dam and its method of operation during dry years that witness less rainfall and during which the amount of water that Addis Ababa would be releasing toward the downstream countries will decrease.

Egypt and Sudan are also calling for an effective and binding mechanism for settling future disputes, while Ethiopia insists on an agreement with nonbinding guidelines.

Mohamed Kheir Omer, an Eritrean-Norwegian political analyst focusing on the Horn of Africa, told Al-Monitor Ethiopia sees that Egypt is the serious problem regarding the dam talks.

He said, “Ethiopia had consistently stated that they had no problems with Sudan and alleged always that other forces — with reference to Egypt — are pushing Sudan to confrontation with Ethiopia.”

On Feb. 9, Amiru announced his country’s readiness to resume dialogue on the disputed issues with Khartoum.

He stressed during a meeting with the acting Sudanese Minister of Foreign Affairs, Ambassador Ali Al-Sadiq, in Khartoum that there are positive developments between the two countries on the GERD and the border dispute.

In a statement issued after the meeting, the Sudanese Ministry of Foreign Affairs said the two sides discussed issues of common interest and ways to strengthen bilateral relations.

Amiru’s statements came in the wake of a two-day visit by the Sudanese Deputy Chairman of Sovereign Council Mohamed Hamdan Dagalo, generally referred to as Hemeti, to Ethiopia on Jan. 22-23 to meet with Ethiopian Prime Minister Abiy Ahmed.

“The visit to Ethiopia is part of the power struggle between Sovereignty Council Chairman Abdel Fattah al-Burhan, representative of the military and his deputy Hemeti who leads the powerful paramilitary Rapid Support Forces,” Omer said.

He added, “Ethiopia sees that it is easier to deal with Khartoum than Cairo over the GERD issue. Burhan is closer to Egypt.”

Tiziana Corda, former assistant research fellow in the Africa Program at the Italian Institute for International Political Studies, told Al-Monitor that Hemeti has softer positions on the GERD and the border dispute with Ethiopia.

She said, “Sudan’s protracted instability following the military’s Oct. 25 coup has generated not only domestic economic repercussions but also regional effects. Some of them concern relations with global powers — like the relations with Russia — but also relations with regional countries, including those with Ethiopia.”

Although Hemeti let Burhan lead the political scene since the military coup that toppled the civilian partners in government, he has been recently active and trying to play a greater role both internally and at the level of Sudanese foreign policy. He has conducted a panoply of visits since the beginning of this year, including to Russia, the United Arab Emirates, Ethiopia and South Sudan.

Ethiopia says that the $5 billion dam, whose construction is more than 80% complete and is the largest in Africa, is of paramount importance for its economic development and for providing energy. However, Egypt believes the dam poses a serious threat to its supplies of the Nile water, on which it almost entirely depends to meet its freshwater needs.

Sudan, which sees benefits from the dam in regulating the waters of the Blue Nile and benefiting from the electricity generated from it, is seeking guarantees regarding its safe and appropriate operation in order to preserve its dams, including the Roseires Dam, the largest of Sudan’s dams.

The tripartite negotiations remain stalled since early April 2021, when the parties failed to achieve any progress in their meeting in Kinshasa, the capital of Congo, and they traded blame for each party’s responsibility for obstructing the talks.

"I doubt there will be a satisfactory agreement on the GERD soon, and with the drought in the Horn [of Africa], the water level in the Nile may go low and then Egypt will feel the pinch," Omer concluded.