Though both sides seem to be trying to downplay the conflicts, Egypt-Sudan relations remain far from friendly as Sudan accuses the Egyptian regime of supporting Sudanese rebels and Egypt accuses Sudan of hosting terror training camps. 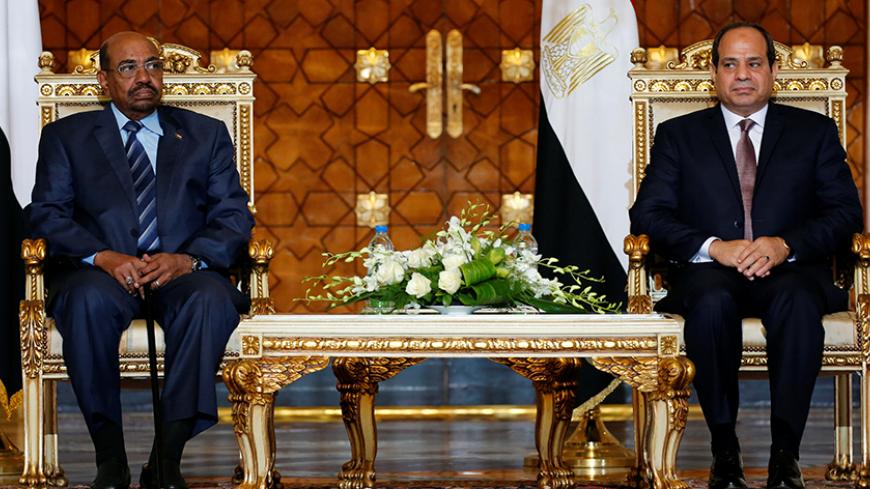 Egypt's President Abdel Fattah al-Sisi (R) and Sudanese President Omar al-Bashir meet ahead of the signing of a number of agreements between the two countries at the El-Thadiya presidential palace in Cairo, Oct. 5, 2016. - REUTERS/Amr Abdallah Dalsh

CAIRO — In an interview with Al Arabiya TV in early February, Sudanese President Omar al-Bashir accused the Egyptian regime of supporting Sudanese rebels and opposition movements. Tensions are already high between Cairo and Khartoum, and security concerns prevail over bilateral ties despite Bashir and Egyptian President Abdel Fattah al-Sisi's talk of friendship, economic integration and common interests during their last meeting in Egypt in October 2016.

During the interview, Bashir stressed that although Sudanese-Egyptian relations are good, there are outstanding issues such as the disputed Halayeb-Shalateen Triangle. He added that Sudan knows that the Egyptian intelligence services are supporting Sudanese opposition leaders and harboring them in Egyptian territory.

The accusations did not stop there. On March 7, a number of Sudanese newspapers republished an article that appeared in Assayha daily: “Egyptian intelligence services increase meetings with Sudanese opposition.” The article revealed that Cairo-based figures of Sudanese opposition factions such as the Justice and Equality Movement (JEM) attended these meetings. It also alleged that the Egyptian regime is conducting media campaigns accusing Sudan of harboring members of the Muslim Brotherhood. Egyptian newspapers had reported on Jan. 19 that investigations into the terrorist Hasm movement indicated that its members had attended military and intelligence training in Sudan in preparation for returning and carrying out attacks in Egypt.

Egypt expressed no support for former US President Barack Obama’s decision to lift economic sanctions against Sudan. While Egypt has not issued any official statement regarding the US decision, some Sudanese circles believe that Cairo will not support Sudan before the US administration, particularly since reports circulated saying that members of terror groups continue to be trained in Sudan.

Commenting on Sudan's accusation, JEM representative in Cairo Huthaifa Muhieddine told Al-Monitor, “The Sudanese security services are putting out fabricated information and reports on us receiving financial or military support from Cairo.”

He said, “Egypt does not have time to support the Sudanese opposition movements. JEM does not have an official representation office in Cairo. Our activity is limited to communications with some civil political parties and movements interested in Sudanese affairs, not with the Egyptian regime itself.”

Muhieddine added, “The concerned Egyptian agencies warned against any political or media activities in Egyptian territory. Also, the number of JEM members in Cairo is very limited, [as most] are based in Darfur.”

An Egyptian diplomat who is well-informed about the Sudanese dossier told Al-Monitor on condition of anonymity, “Tension and mutual accusations have returned following several developments. Most notable among these are the Sudanese-Saudi rapprochement and the six-month probation period set by the Obama decision before lifting economic sanctions against Khartoum.”

The diplomat added, “The official Egyptian institutions have demonstrated that they have good faith and are serious in promoting ties with Sudan, as a neighboring country with whom they have strategic, security and economic interests. Yet a number of signs coming from the Sudanese side have affected the Egyptian trust.” He expressed his dissatisfaction at “the harmful media campaigns and security reports accusing Cairo of supporting the Sudanese opposition without offering any evidence, which is unacceptable in international relations.”

Commenting on Egypt's stance on Sudanese support for the Brotherhood, he said, “The Egyptian administration is nearly convinced that the Sudanese regime is supporting members of the Brotherhood and is Islamist, even though it tries to pretend otherwise.” He pointed to past incidents such as Sudan harboring al-Qaeda leader Osama bin Laden in the 1990s.

The diplomat stated that the Egyptian administration appreciates the importance of ties with Sudan, despite its disappointment with Khartoum’s Nile waters policy and lack of support for Egypt in its disputes with downstream countries on Nile negotiations.

He stressed, “Khartoum is also aware of how influential the Egyptian opinion and orientation is in the terrorism dossier, particularly since it is still in the probation period under the Trump administration, in light of Islamophobic policies toward a number of Islamic countries — including Sudan.”

On March 21, the Sudanese government announced the formation of a committee consisting of various government agencies to drive the Egyptians out of Halayeb via diplomatic means. On March 17, it banned Egyptian goods from entering Sudan. Egypt has refrained from making any official statement on the moves.

The diplomat said, “We have a clear policy of not getting carried away by attempts by any official or unofficial Sudanese parties to escalate the situation. We did, however, officially object before the Sudanese Ministry of Foreign Affairs to the offenses circulated in the Sudanese newspapers.”

In March, Bashir took several measures as part of Sudan’s attempts to curry favor with Cairo and the international community to keep them from accusing it of supporting Islamist currents and harboring members of Islamist groups. He embarked on a broad reshuffle in the government, dismissing all Islamist figures and appointing military ones, such as Bakri Hassan Saleh as prime minister. Egyptian Islamist leader Abdel Moneim Aboul Fotouh was blocked March 24 from entering Sudanese territory to attend the Popular Congress Party’s conference, though it was attended by multiple Hamas leaders and Tunisian Islamist leader Rachid Ghannouchi.

Ayman Abdel Wahab, a researcher on African affairs at Al-Ahram Center for Political and Strategic Studies, told Al-Monitor, “The Sudanese regime has found it more beneficial to coordinate with Ethiopia than with Egypt in the terrorism file. It is also getting closer to the Gulf countries in countering terrorism at the Arab level.”

Tension and security concerns will likely continue to prevail over Egyptian-Sudanese relations until the United States makes a final decision regarding the Bashir regime and Sudan is removed from the US list of countries accused of sponsoring terrorism, the reason for its 20 years of economic sanctions.