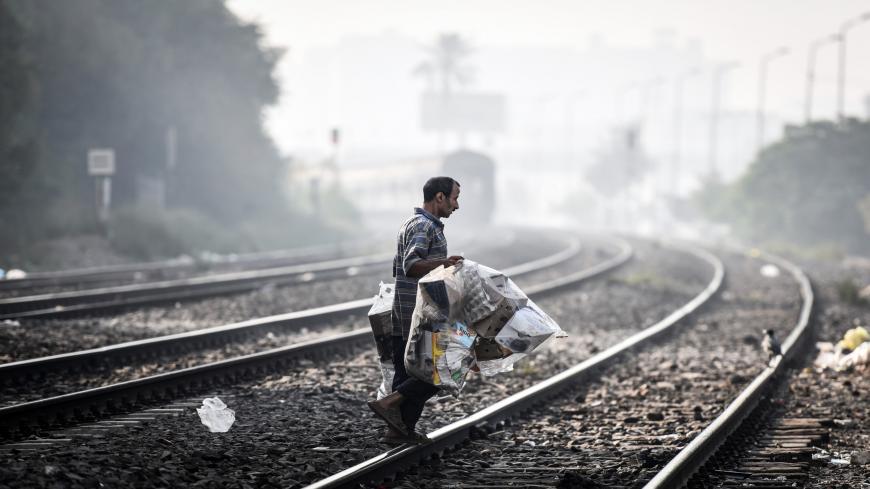 A man walks on a railway track as a train approaches in Cairo, Egypt, Oct. 11, 2015. - MOHAMED EL-SHAHED/AFP via Getty Images

CAIRO — Egypt and Sudan are currently reviewing a plan to establish a cross border railway network between the two countries.

During a virtual meeting Oct. 25, Egyptian Minister of Transport Kamel al-Wazir and his Sudanese counterpart, Hashim Ibn Auf, discussed the terms of a joint cooperation for railway connectivity. The document aims to provide the necessary funding for an economic, social and environmental feasibility study for the project of constructing a railway line between Egypt and Sudan.

In the first phase of the project, the railway will extend from Aswan in southern Egypt to Wadi Halfa in Sudan.

Wazir signed the document and handed it over to the Sudanese ambassador in Cairo for Ibn Auf to sign, according to local media reports. The project will be carried out through coordination and cooperation between Egypt, Sudan and the Kuwaiti Fund for Economic Development.

Egyptian state newspaper Akhbar El-Yom said in an Oct. 26 report that the railway is to extend approximately 900 kilometers (559 miles) between Egypt and Sudan, with about 250 kilometers (155 miles) inside Sudanese territory. The railway network will transport both passengers and goods between the two countries. At its final stage, the network will stretch from Alexandria to Khartoum.

Wazir and Ibn Auf also discussed during their virtual meeting a number of road projects, including a prospective land road between Egypt and Chad that would pass through Sudan, to be a gateway for trade between the two countries and between Chad and West African countries, as well as the Cape to Cairo road that will cross nine African countries.

Egypt is currently executing the Cairo-Cape Town road on Egyptian territories (Cairo/Arqin); the road passes through the governorates of Fayoum, Beni Suef, Minya, Assiut, Sohag, Qena, Luxor and Aswan, and then extends from Aswan to the Egyptian border, through the Toshka junctions to Arqin and from there to Sudan. This project is of great importance in achieving land connectivity and increasing trade with African countries. It also serves Egyptians and Africans by creating job opportunities and achieving comprehensive development.

Yaman al-Hamaki, a professor of economics at the Faculty of Commerce at Ain Shams University, told Al-Monitor over the phone that Egypt has tremendous opportunities to increase its volume of trade relations with Sudan, which is an important strategic partner. “The current trade relations between the two countries are not commensurate with the size of the opportunities for increasing these relationships and creating greater investment opportunities,” she said.

According to the State Information Service (SIS), Egypt and Sudan have strong commercial relations. Egypt imports from Sudan livestock, sesame seeds, wheat flour and raw materials, while Sudan imports from Egypt food products, building materials, textiles and medicines. The volume of trade exchange between the two countries reached about $1 billion in 2017, while the volume of Egyptian investments in the Sudanese market was estimated at $10.1 billion and the volume of Sudanese investments in Egypt at $97 million, according to SIS.

Moreover, Egypt supplies Sudan with about 300 megawatts (MW) of power under the electricity linkage project between the two countries. In its first phase, which is scheduled to be completed in 2021, the capacity of transferable power will be increased to up to 3,000 MW, according to SIS.

Hamaki noted, “The construction of the railway is of utmost importance because it will facilitate the movement between the two countries for individuals, and it may contribute to Egypt becoming a hub for training Sudanese human cadres in various fields. The railway will also enhance inter-investment between the two countries in terms of agriculture and livestock by facilitating and the transportation of goods between them at a lowest cost.”

She added that the political changes accompanying the US decision to remove Sudan from the list of states sponsoring terrorism will help reintegrate Sudan in the international scene and thus enhance opportunities for economic cooperation with it.

The secretary-general of the Sudanese People's Congress Party, Bashir Adam Rahma, told Sputnik Oct. 12 that the railway project between the two countries will be in the interest of Egypt, perhaps more than in the interest of Sudan at the present time. He noted that Egypt is industrially advanced in all fields, including agriculture, while at the same time needs food resources from Sudan. He argued that Egypt suffers from a shortage in livestock, which it may secure from Sudan at a lower cost and at a faster pace.

“I think the railway project can succeed, especially since there is political convergence at the present time,” Rahma said in the interview with Sputnik. “The West has a great desire to invest in Sudan, which is seen as a gateway to the whole of Africa.” He added that this railway could connect Sudan and Europe through the ports of Alexandria and vice versa.

Egyptian-Sudanese relations are witnessing momentum at the political level, especially after the visit of the Egyptian prime minister to Sudan on Aug. 15, which is the first official visit of an Egyptian prime minister to the country since 2012. Moreover, consensus is taking shape between Egypt and Sudan regarding the Grand Ethiopian Renaissance Dam agreement during the last round of negotiations with Ethiopia.

Hesham Abdel Wahed, head of the parliamentary Transport and Communications Committee, told Al-Monitor that establishing railways and paving land roads is the basis for any real development or trade exchange that will take place in the two countries. He pointed in this context to the Cape to Cairo road project, which he said would contribute to development in Egypt and Africa.

Abdel Wahed said, “The launch of the railway will be reflected in the trade volume between the two countries, as well as between the two countries and Africa. This is especially true in light of the historical and longstanding relations that bind Egypt and Sudan. Besides the railway, Egypt and Sudan could jointly exploit the Nile River to transport passengers and goods, in parallel with the train line, since river transport is one of the cheapest means of transportation.”