Egypt and Sudan are preparing to construct a railway network to boost trade on the African market. 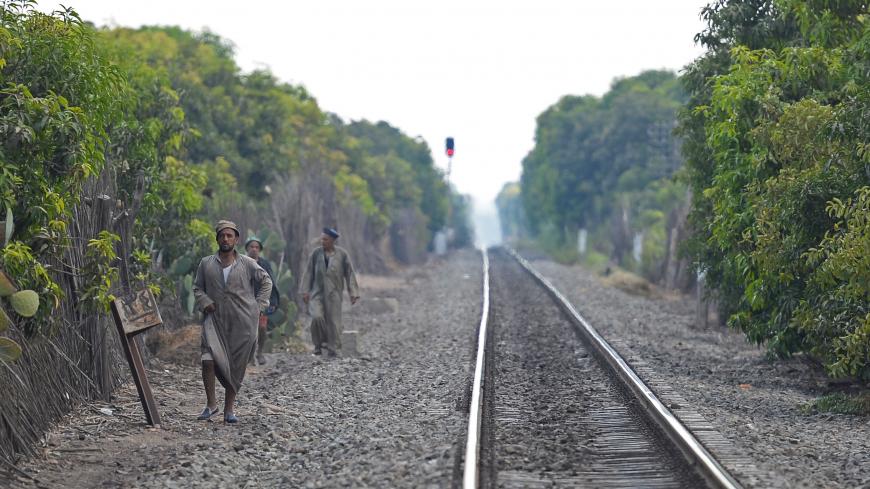 Mango farms workers walk on a railway after the end of their working day in the village of al-Qata, Giza Governorate, on Aug. 27, 2018. - MOHAMED EL-SHAHED/AFP via Getty Images

Egypt has taken serious steps to construct a cross-border railway linking it to Sudan to transport goods and passengers in the latest sign of stronger cooperation between the two downstream Nile states.

On March 11, Aswan Governor Ashraf Attia met with officials at the Egyptian Ministry of Transport to study the designs and implementation plans for the project, which aims to boost tourism and bilateral trade.

The meeting coincided with a two-day visit to Cairo by Sudanese Prime Minister Abdalla Hamdok. He was accompanied by a high-level government delegation and met with Egyptian President Abdel Fattah el-Sisi on March 11.

According to a statement by the Egyptian presidency, Sisi and Hamdok discussed bilateral ites and ways to boost commercial and economic cooperation, including the railway project and joint industrial or agricultural investment.

No date has been set yet for work to begin on the cross-border railway project. Its estimated cost is around 1 billion euros ($1.19 billion). The 900-kilometer railway will start from Aswan and pass through Toshka and Abu Simbel in southern Egypt. From there, it will extend to the Sudanese city of Wadi Halfa on a line to be built in the projects second stage.

Cairo is trying to connect Egypt’s railway networks to neighboring countries as part of efforts to modernize the national transportation sector. Egyptian trains are notorious for crashes and collisions.

Sudan’s Minister of Transport Mirghani Mousa told Sudan News Agency following a meeting with his Egyptian counterpart Kamel al-Wazir in Cairo on March 12, that the ambitious railway project is one of many transportation projects between Sudan and Egypt.

In October 2020, Wazir and his Sudanese counterpart at the time, Hashem Ben Ouf, first laid the groundwork for the project with a railway connectivity agreement.

Egypt and Sudan have additional transportation projects in the pipeline, most notably the construction of a road between Egypt and Chad that will pass through Sudan.

Mohammed Abdel Ghaffar, head of the non-governmental African Economic Council, said that the railway will facilitate trade between the two countries and allow Egyptian products greater access to African markets.

Abdel Ghaffar told Al-Monitor that Egypt wants to open markets in the landlocked African countries that have borders and land ports with Sudan such as the Central African Republic, South Sudan, Chad, Uganda and Ethiopia.

Bilateral trade between Egypt and Sudan reached $862 million in 2020. Egypt's exports to Sudan amounted to $496 million, while Egypt's imports from Sudan recorded $366 billion in 2020.

Sayed Fleifel, a professor of African studies at Cairo University and former head of the parliamentary African Committee, told Al-Monitor that transportation projects between Egypt and Sudan had been planned for years, but lacked the necessary political momentum to be implemented during the era of former Sudanese President Omar al-Bashir.

Fleifel said the planned railway is part of a larger project known as the Cairo-Cape Town Road that will connect North Africa to South Africa. Egypt is currently completing its section of the pan-African highway, which begins in Alexandria.

Hani Raslan, head of the Sudan and Nile Basin countries unit at Al-Ahram Center for Political and Strategic Studies, told Al-Monitor that the railway project, a continuation of the unprecedented coordination between the two countries, will boost bilateral relations.

Goods and passengers flow daily between the two countries through the Qastal-Ashkit and Arqin border crossings. While official figures on the volume of trade through the two crossings are not available, local Egyptian reports indicate that 80 cargo trucks and 70 passenger buses pass daily through these crossings.

Raslan believes that bilateral economic projects such as the railway project, an electrical connection project and others in the fields of transportation, agriculture and irrigation cannot be analyzed in isolation from the dispute over the Grand Ethiopian Renaissance Dam (GERD) that Ethiopia is building on the Blue Nile, the principal tributary of the Nile River. The Blue Nile flows north into Sudan, then Egypt.

Ethiopia hopes the dam will turn it into the largest supplier of hydropower in Africa. However, Egypt and Sudan fear that their share of water will be jeopardized and affect their development prospects. Over the course of a decade, negotiations have repeatedly failed to reach an agreement on the GERD.

Raslan added that even if no progress is made on the GERD, Cairo and Khartoum's warming ties are a positive development.

Hamdok's visit to Cairo came less than a week after Sisi visited Khartoum, his first trip to the neighboring country since the popular uprising in 2019. Senior civil and military officials from the two countries have been exchanging regular visits and earlier this month, the two countries signed an agreement to strengthen military cooperation.

Egypt and Sudan want to internationalize the GERD issue by getting the United States, the United Nations, the European Union and the African Union to act as mediators and push forward the negotiations that have been frozen since January. However, Ethiopia opposes the Egyptian and Sudanese efforts to internationalize the talks, insisting the AU is the only appropriate venue to settle the dispute.

Raslan argued that through their rapprochement, Egypt and Sudan are seeking to pressure Ethiopia to return to the negotiation table. “Sudan is going through a fragile transitional phase amid a grinding economic crisis. The situation was further exacerbated with the revival of a border dispute with Ethiopia. This seems to have pushed Khartoum to turn to Cairo for economic, political and military support.”