Egypt plans to work with nine other countries to complete the construction of a highway linking the country’s north to Cape Town in South Africa by 2024, with hopes of expanding trade in the African continent. 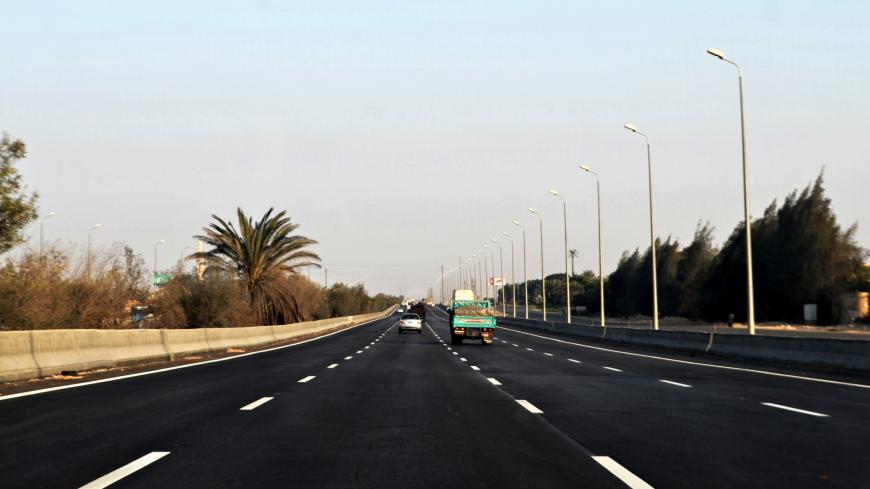 The Alexandria-Cairo Desert Road is seen on March 24, 2014. Egypt is working on completing its share of what it hopes will be a high-powered trans-African highway stretching from Alexandria to Cape Town, South Africa, that is being called the Cairo-Cape Town Highway. - Faris knight / Wikimedia Commons

The Egyptian government is leading efforts to build a road linking Egypt with nine African countries as part of efforts to boost development and bolster Egypt’s exports to Africa.

Transport Minister Kamel el-Wazir told the House of Representatives on Jan. 31 that his ministry is working to carry out several road projects to connect with Egypt’s neighbors.

“We will complete the Cairo-Cape Town Road that will cross through nine African countries as part of Egypt’s efforts to connect with neighboring countries,” Wazir said.

The pan-African highway would begin in Egypt from the coastal city of Alexandria and go through Cairo on its way to the Arqin crossing on the Egyptian-Sudanese border.

The road will pass through the governorates of Fayoum, Beni Suef, Minya, Assiut, Sohag, Qena, Luxor and Aswan, to the Toshka junctions to Arqin.

“The 1,155-kilometer [715-mile] section of the road in Egypt would reach Arqin by 2024 and connect from there with Wadi Halfa in Sudan and continue to connect with other countries,” Wazir said. He added that the trans-African road is estimated to cost 26 billion pounds ($1.65 billion).

It is not yet clear whether the current tension between Egypt, Sudan and Ethiopia over the mega dam project being built by Addis Ababa on the Nile River will hinder efforts to complete the mega road project.

“Egypt is also building a 1,102-kilometer [685-mile] route to connect with Chad through Libya at an estimated cost of 22 billion Egyptian pounds [$1.4 billion],” Wazir said.

The transport minister said his ministry is also working to construct a 585-kilometer (363-mile) coastal highway from Salloum in western Egypt to Benghazi in eastern Libya at a cost of 3 billion Egyptian pounds ($190.6 million).

“This coastal road is very important to Egypt, the Egyptian industry and labor and to all Egyptian companies that will be working in Libya,” Wazir said.

“The road projects with neighboring countries aim to achieve sustainable development, promote trade exchange with Egypt’s neighbors and enhance access of the Egyptian exports to the Arab and African markets,” Wazir said.

The Cairo-Cape Town Road is being co-funded by the African Development Bank, in cooperation with the UN Economic Commission for Africa and the African Union.

Wazir said in previous statements that his ministry has engaged in talks with the African Development Bank (AfDB) to obtain a loan of 22 billion pounds ($1.4 billion) for the trans-African road project. “The cost of the Cairo-Cape Town Road will be funded by the AfDB and from the Egyptian budget,” he told MBC Masr channel in February 2020.

The director of the African Development Bank’s country office, Malin Bloomberg, said in August 2020 on the sidelines of the annual meetings of the bank that trans-African roads help reduce the high cost and time of transporting goods and boost economic integration among the African countries.

“The AfDB is keen on supporting the Cairo-Cape Town Road as it will serve large numbers of people and enhance the movement of goods in Egypt and other parts of Africa,” Bloomberg said.

He continued, “The AfDB intends to increase its support to the transport sector in Egypt, in parallel with other priorities set by the Egyptian government.”

In October, Egypt and Sudan signed an agreement to build a cross-border railway network to transport both passengers and goods between the two countries, as part of efforts to increase their trade exchange.

“The Cairo-Cape Town Road is a milestone project that will achieve land connectivity and increase trade exchange with African countries,” Magdy Salah, a professor of highway and transportation engineering at Cairo University, told Al-Monitor over the phone.

He said the pan-African, cross-border highway would shorten the arrival time of Egyptian goods to African markets, particularly agricultural products. “The pan-African road will give a major boost to government efforts to achieve economic development and bolster its clout in the African continent.”

Salah blamed lack of funding for the delay in carrying out the road project, which was first unveiled in 2015. “It appears that the Egyptian government has now managed to secure the necessary funding for the project and is working hard to complete it by 2024,” he said.

In April 2019, President Abdel Fattah al-Sisi said during the Second Belt and Road Forum in Beijing that the Cairo-Cape Town Road aims to augment the inter-African trade exchange and investment.

“We welcome efforts to boost the current partnership as part of the Belt and Road initiative with China and other parties to contribute in enhancing efforts of the African continent to achieve the goals of sustainable development and improve the living standards of the African peoples,” Sisi said.

According to the state statistics agency CAPMAS, in 2019, Egypt’s trade exchange was $899 million with Libya, $608 million with Sudan, $550 million with Kenya, $173 million with South Africa and $144 million with Ethiopia. The Cairo-Cape Town Road would pass through all five countries.

Egypt is a signatory to several multilateral trade agreements with African countries, including the Common Market for Eastern and Southern Africa (COMESA) and the African Continental Free Trade Area (AfCFTA).

After long delays due to the coronavirus pandemic, African countries officially began trading Jan. 1 under AfCFTA — the biggest trade deal in the world in terms of the number of participating countries since the establishment of the World Trade Organization in 1994.

The free trade agreement, which was signed in March 2018 in Kigali, Rwanda, is expected to create jobs for more than 1.5 billion people, with a projected trade exchange worth $3.4 trillion.

On Jan. 17, Sisi held talks with AfCFTA Secretary-General Wamkele Mene of South Africa to discuss ways of energizing the trade agreement. According to a presidential statement, Sisi reiterated “Egypt’s full support to the agreement as it represents a promising start to achieve continental integration as well as the desired economic and trade integration for African states.”

Abdel Mottaleb Abdel Hamid, a professor of economics at the Cairo-based Sadat Academy, said the Sisi administration is mobilizing resources to double Egypt’s exports and trade with African countries.

“Egypt seeks to increase exports to Africa to $30 billion within a period of three to five years and the Cairo-Cape Town Road will help the government achieve this goal,” Abdel Hamid told Al-Monitor.

He credited the Egyptian government for implementing an ambitious plan to revamp road and rail networks across the country with a view to enhancing trade relations with Egypt’s neighbors.

Egypt has built a 7,000 kilometer (4,350 mile) road network nationwide and is expanding the country’s rapid transit and railway networks as part of efforts to promote business and create an investment-friendly environment.

Egypt signed Jan. 14 a memorandum of understanding with Germany’s Siemens to build a high-speed electric railway network connecting Ain Sokhna on the Red Sea coast to New Alamein on the Mediterranean Sea.

by Murielle KASPRZAK and Joseph SCHMID | AFP | May 26, 2022
END_OF_DOCUMENT_TOKEN_TO_BE_REPLACED