The African Union Steering Committee announced that the massive Nile River navigation project will be complete by 2024, but challenges lie ahead. 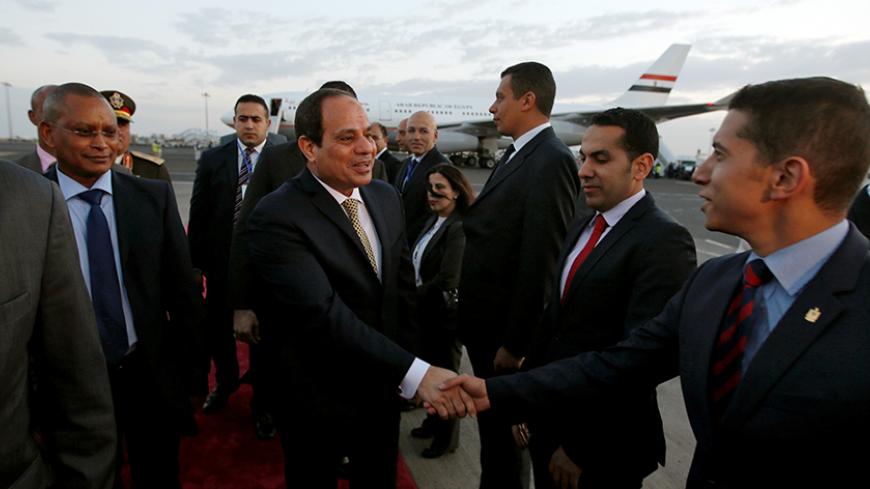 Egyptian President Abdel Fattah al-Sisi is received on his arrival at the Bole International Airport ahead of the 28th Ordinary Session of the Assembly of the Heads of State and the Government of the African Union in Ethiopia, Addis Ababa, Jan. 29, 2017. - REUTERS/Tiksa Negeri

CAIRO — A 2,500-mile navigational shipping line connecting Lake Victoria and the Mediterranean Sea via the Nile River should be up and flowing in 2024, 11 years after it was first approved.

The African Union Steering Committee, headed by Egypt, is directing construction of the project, which is part of the Presidential Infrastructure Champion Initiative. The enterprise is being carried out under the umbrella of the New Partnership for Africa's Development.

The project entails building a shipping lane along the Nile River for small- and medium-size commercial vessels to boost bilateral trade among nine countries: Tanzania, Kenya, Uganda, Rwanda, Burundi, Democratic Republic of Congo, South Sudan, Sudan and Egypt. The line will stretch more than 4,000 kilometers (about 2,500 miles) along the White Nile all the way to the Mediterranean Sea. The project was widely welcomed, as it will contribute to the countries' development, and has gained even more importance since Ethiopia's bid to join the project in January.

The undertaking is also considered a component of the Alexandria-Cape Town land road project. The land venture is currently operating under the umbrella of the Common Market for Eastern and Southern Africa (COMESA) and links southern Africa to its north. The road is about 10,000 kilometers (6,214 miles) long and goes through Egypt, Sudan, Ethiopia, Kenya, Tanzania, Zambia, Zimbabwe, Gabon and South Africa. The African Development Bank and other international organizations are financing the road's operation, which is being handled jointly by several Egyptian, Saudi and Sudanese companies, among others.

"We still have to add the special specifications related to this international road, such as signs and markers,” but all the infrastructure work has been completed, said an adviser to Samir Salam, Egypt's transportation minister for river transport affairs. The adviser told Al-Monitor that linking the land and water projects will facilitate moving people and goods along the African continent, and then to Europe through the Mediterranean Sea.

Egypt completed a pre-feasibility study in May 2015 with $500,000 of funding. Just a few weeks ago, Egypt also signed a contract to conduct other feasibility studies with a German-Belgian international consultancy office, using $650,000 in funding from the African Development Bank. “The cost of implementing the project will range between $10 billion and $12 billion,” Adel said.

The pre-feasibility studies provided six alternatives for implementation. Al-Monitor obtained a copy of the study summary, drafted by the Egyptian Ministry of Water Resources and Irrigation, and approved by COMESA.

The second, third and fifth alternatives focus on overcoming obstacles posed by river areas where navigation is difficult by turning, in part, to land transportation, including a railway network in Uganda that would need to be built to link the Victoria Nile region to Lake Kyoga. This would also involve using the White Nile port in South Sudan’s capital, Juba, to receive shipments by rail and river navigation networks, relying on Egypt's 800-kilometer (497-mile) "shortcut" navigable river channel from the Abu Hamed area to Aswan, rather than the 2,300 kilometers (1,429 miles) by road.

Nader Masri, head of the unit overseeing the studies on the Nile navigational line, explained other details of those plans to Al-Monitor. “The mechanisms aimed at overcoming river navigation obstacles in the Nile in the second, third and fifth alternatives to the project [also] consist of [rectifying] the Nile course, setting canal locks to overcome waterfalls and traffic areas of the dams in the Nile, and providing elevators to transport cargo from one level to another in the Nile.”

Meanwhile, the first alternative relies on the course of the Nile for navigating ships and transporting goods, excluding Lake Victoria. It also relies on the rail network through Uganda and the LAPSSET program, which connects East and Central Africa to the Mombasa port in Kenya. (LAPSSET stands for Lamu Port, South Sudan, Ethiopia Transport Corridor.) The fourth alternative is similar to the first, but provides an opportunity to link Rwanda with Lake Victoria by including navigation across the lake and the Nile. The sixth alternative depends entirely on river navigation in the Nile and on construction of navigation lines on Lake Victoria, which connects Kenya, Tanzania and, through the Kagera River, Rwanda.

These three alternatives (the first, fourth and sixth) require linking Lake Edward and Lake Albert, and the construction of a navigation channel linking the Abu Hamed region of Sudan to Aswan.

From his office in Cairo, Egyptian Minister of Water Resources and Irrigation Mohamed Abdel Ati told Al-Monitor that the Nile navigation project has become a development corridor, especially since linking with the Alexandria-Cape Town land route.

"Its main objective is to be linked to Europe and to solve the problem of poor infrastructure and the high cost of transportation, which reduces the economic viability of investment projects in the African continent,” he said.

Objections have been raised in Cairo against the Nile navigation line. Haitham Awad, former head of the irrigation and hydraulics department at Alexandria University, told Al-Monitor the LAPSSET project in Kenya threatens the economic feasibility of the Nile navigational line. “The Kenyan project will connect East and Central Africa to international markets via a line between Kenya, Ethiopia and South Sudan that ends at the sea port on the Indian Ocean,” he said.

“Trade and commerce will be faster and easier from Kenya, instead of Egypt."

Egypt’s former minister of water resources and irrigation, Mohamed Nasreddin Allam, told Al-Monitor political tensions and lack of security and stability in African countries present major challenges for such projects. For example, unrest in South Sudan has been impeding completion of the Jonglei Canal Project between that country and Egypt, which is designed to divert 12 billion cubic meters of water currently lost in swamps, Allam said. Also, since that project is bilateral and not regional, "Some foreign parties are hindering [its] execution,” he said.

But, as for objections to the Nile navigation line, he said, “The 10 countries [including Ethiopia] that are partners in the project will deploy concerted efforts to overcome any developments that may hamper its completion." In addition, studies have shown that the LAPSSET corridor in East Africa complements the navigational line project, he said.

Supporters say the efforts of the New Partnership for Africa's Development to execute the Mediterranean, Victoria-Cape Town development axis project would solve numerous problems in Africa and create a spirit of development cooperation under the banner “Africa Without Borders.”